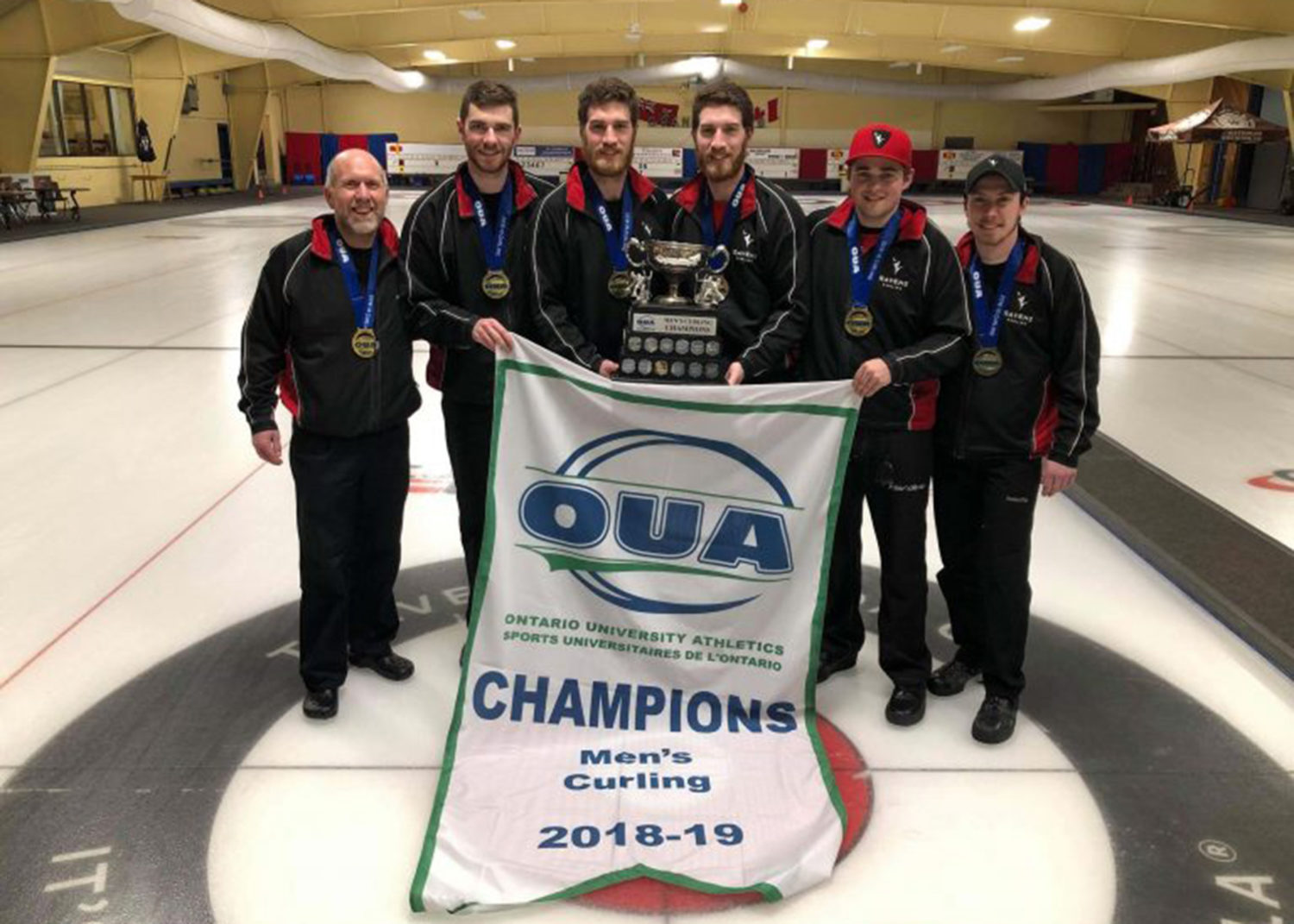 The Carleton Ravens men's curling team following their OUA win in 2019. The team is slated to take on 15 other teams for the gold this year, starting Feb. 13.
Photo by: Courtesy of Riley Calwell

Badass. A word at once evocative and vague. But when describing the Carleton University Ravens men’s curling team’s double-title win last year, Adam Kingsbury, the Ravens’ assistant coach, had a very particular moment associated with the word.

“Here’s the story,” said Kingsbury with his eyes glued to the sheet in front of him. “It’s badass what they did last year. And, of course, [they] want to go out and try to [win] again. If you’re going to lose, make it really hard for the person who’s going to earn that right.”

So that’s the plan.

From Feb. 13 to 17, the Ravens men’s curling team will be returning to the Ontario University Athletics curling championships – where they got their first taste of gold in 2019. Competing against 15 other universities from across the province, the OUAs are the first step toward a win on a national level.

If the Ravens are once again able to attain their goal of winning the OUAs – and, subsequently, the U Sports national curling championships – it would be the first time in history that the same team has won two years running.

What’s more is that, should the Ravens prove successful, they will have accomplished this with all the same team members as the year prior.

Brendan Acorn, Cameron Goodkey, Morgan Calwell, Mackenzie Calwell and Wesley Stakes are in their second year of curling together and have been working hard both on and off the ice to keep the team working as a unit.

“We sat down at the end of last season and then made a commitment and worked through the summer,” said Morgan Calwell, second-year civil engineering student at Carleton and 2nd position on the Ravens curling team. “[To] work stuff out, get positions set up, to learn how we’re going to play the game, strategize, [and] set our goals through the year.”

A strategy that works for the team and shows good leadership and encouragement from their coaching department. 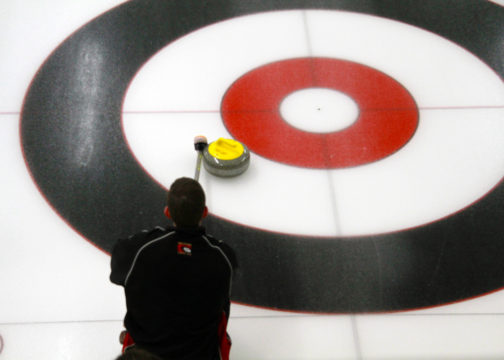 Brendan Acorn, lead, focuses on the sheet as he prepares his shot. Photo credit: Dana Simpson

One of these coaches, who went on to win a title of his own at last year’s OUAs, was Tom Sinclair, head coach of the Ravens men’s curling team for the past five years.

Sinclair was voted “Coach of the Year” for the Ravens in 2019 and attributes his win to the current team, pledging that they are the easiest group he has ever had to train.

“The most rewarding part is, quite frankly, being along for the ride while these guys just put it together,” said Sinclair looking toward the rink as his team took the ice at the Ottawa Curling Club for a game. “We take all of the talents on our team, and we put them in the combination that we can be the absolute best at all aspects of the game.”

Sinclair went on to explain the tactic that has been serving the Ravens well the past year or more. A technique he pulled from his extensive knowledge of curling history and one that makes the Ravens an “uncommon lineup”.

“Brendan is our lead but he’s also our vice,” explained Sinclair. “You can play any one of those four positions — the two sweepers, the vice and the skip — in any one of the throwing positions and we play it with our vice being lead and our skip being fourth.”

This is the very technique that helped the Ravens to win in the quarterfinal game against Waterloo last year.

“Waterloo had us dead to rights,” recalled Sinclair. “Until the team made the most perfect freeze I’ve ever had the pleasure of watching. And that shot, combined with the next two shots, allowed us to get to the extra end – which we won – and won that game.”

From that game win, they went on to win the U Sports curling championships for the first time in Carleton University history.

Now, a year later, they are hoping to win it all again. Something that Kingsbury said is certainly possible but, at the end of the day, requires more than precedence.

Luckily focus and athleticism do not seem to be at risk when it come to the Ravens men’s curling team. They will face many excellent teams in the OUAs this week, all of them providing their own set of challenges.

“The ice,” laughed Mackenzie Calwell, third-year mechanical engineering student and 3rd position Ravens curler. His teammates all nodded in agreement. “You beat the ice and you’ll be fine.”