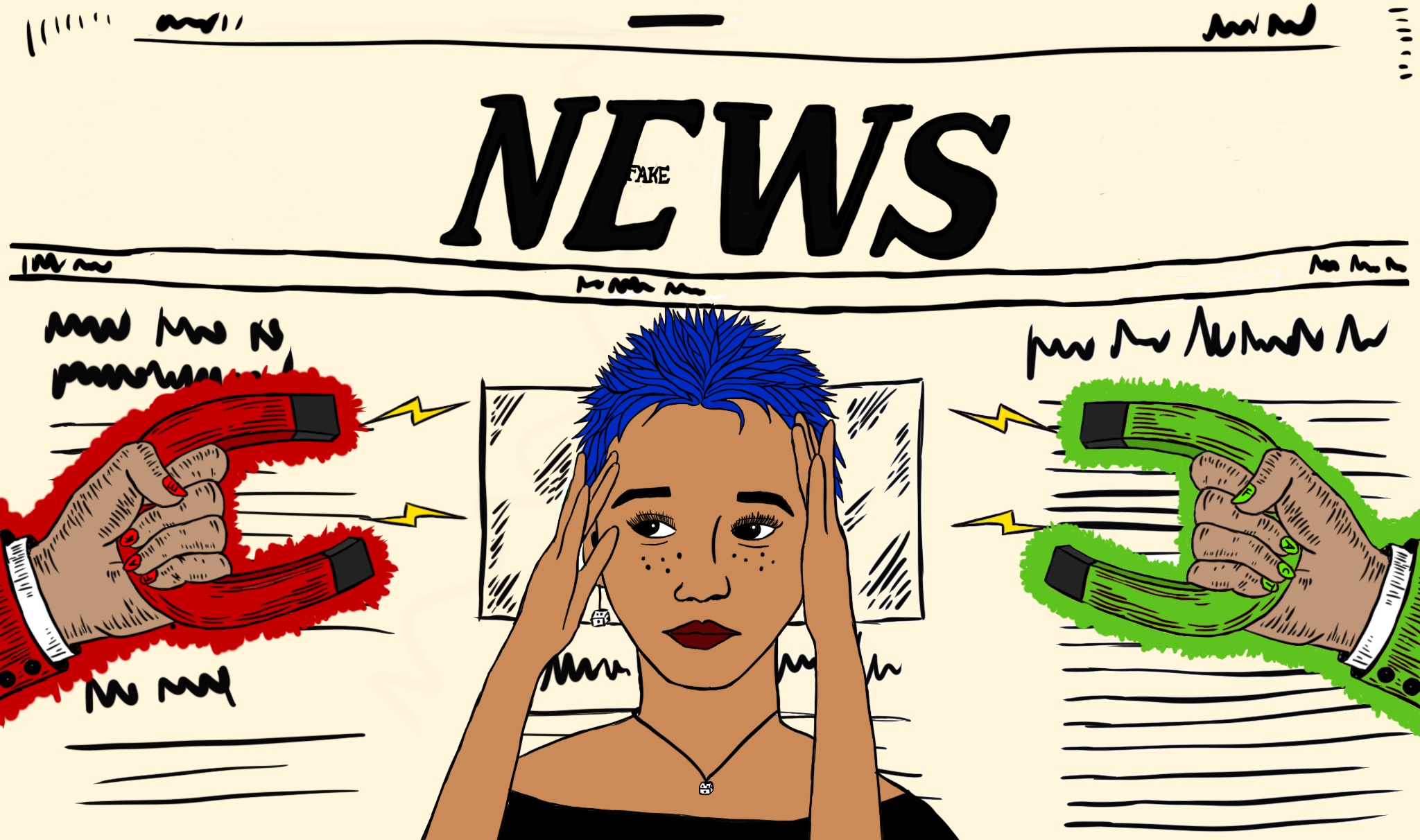 Disinformation is a dangerous, but hardly new beast. Some of the most lionized journalists in history, like Joseph Pulitzer, have been caught using fake interviews, bogus experts and artificial facts to spark sympathy and rage alike — eventually playing a role in leading the U.S. into the 1898 Spanish-American war.

Fast-forward to February 2022 in Ottawa, ON., and we saw the same sort disinformation fabric unravel in the face of the Truckers Convoy protest. Media manipulators have effectively turned neighbour against neighbour on both the physical and digital streets, where Truth Boulevard and Disinformation Avenue intersect.

The first: the 78-day-long Oka Crisis of 1990, where Indigenous activists defending their land against encroachment were met with brute force by the Quebec provincial police and the Canadian army.

“My own cousin was stink-bombed in a building while contesting his right to the Oka land,” says Taylor.

The second: the Wet’suwet’en protests of 2020 that peacefully blockaded an Albertan CN rail line in support of nationwide land defenders at odds with the Coastal GasLink pipeline. These demonstrations were dismantled in less than 12 hours by the Critical Infrastructure Act, introduced by the UCP government to enforce grave penalties against anyone blocking its sweeping definition of critical infrastructure.

Believe it or not, there is one commonality between the rampant issues underlying each of these protests — the media only took an interest in reporting on them until each issue hit a boiling point.

“When scared and frustrated people are given information that provides an appearance of comfort and security to them, which varies from person to person, they’re likely to believe it,” say Taylor. “There are biases on every media platform that pick up on these fears in different ways.”

Legacy news is no longer the driving force of public opinion — social media now lies at the heart of most people’s news intake, playing host to the most vitriolic political discourse. Social media news, which is fuelled and fattened by out-of-context headlines, excerpts from long-form features and snippets of video footage, sheds light on an alarming paradox: the services that once promised to connect us became the strongest forces driving us apart.

“What worries me is that we continue to allow the fear of ‘the other’ divide us and embolden certain things in the media discourse, such as extremist groups, who then push or pull those sitting on the fence to one side,” says Taylor.

Social media platforms make more money the longer we stay on them, and the most engaging content of all is content that elicits moral outrage and division. This incentivizes users to create space for forceful and sensationalized online discourse that fosters viral half-truths — also known as disinformation — a dangerous commodity.

“First and foremost, considering the source of where the material you are accessing is coming from is extremely important. What are the mission and value statements of the website from which the information is originating?”

Disinformation red flags tend to be the most threatening to democracy on social media, where articles can be re-shared and resurfaced years after being originally posted, according to Provenzano.

“Outdated content can be misleading to end-users when re-shared if that content is either out of date or simply irrelevant now, as information isn’t always timeless,” says Provenzano. “Considering the source of the material you’re accessing is extremely important — what are the mission and value statements of the website from which the information is originating?”

In the early days of the Truckers Convoy protest, a photo of thousands of protesters went viral on Facebook and Twitter, which was wrongly captioned as depicting the demonstrations at Parliament Hill today. After Agence France-Presse (AFP) conducted a quick reverse-image search through their fact-checking service, it was quickly pointed out that the photo was taken during an anti-government protest in Moscow in 1991. 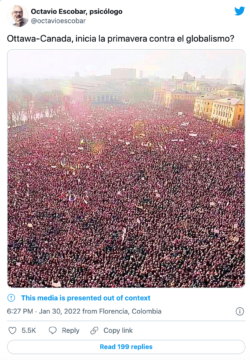 Octavio Escobar, a Columbian psychologist, tweeted this image of the Russian anti-government protests in 1991 and claimed that it was Ottawa’s 2022 anti-vaccine protests. It was retweeted over 5000 times and liked by over 15,000 Twitter users.

How could this milestone in Russian history, 500,000-plus protesters marching to demand that Mikhail Gorbachev and his Communist party give up power, be mistaken for a few thousand people protesting in Ottawa at Parliament Hill over two decades later? The answer is simple: disinformation thrives in the face of uncertainty and clings on to fear.

So, if our minds are plagued by fear and uncertainty when consuming news online, how do we possibly identify and preserve factual information from ambiguous disinformation? The answer might not be entirely clear just yet but, according to Provenzano, there are a few ways to push back on disinformation.

“One way is to use your fact-checking toolkit, such as considering the source, reading beyond the headline, looking for supporting sources and corroborating the author’s identity,” says Provenzano. “If you really aren’t sure if something is fake or fact, that’s okay, and turning to your local library could be a great place to start.”

Another fantastic place to start putting disinformation combat skills into practice is GetBadNews.com — a simulation that builds resistance against bad online information by putting players in the position of fake news media magnates. The game draws heavily on inoculation theory, which is the idea that people can be “vaccinated” against disinformation through exposure to a weaker version of a misleading argument.

In this simulation, a player’s score is measured by how many followers they can accumulate and how high of a credibility score they can achieve. Players are presented with options to advance their fake news campaign, and the goal is to find a balance between creating content that doesn’t lie too blatantly to their followers, while also not aligning too closely with journalistic ethics. The player collects six badges throughout the game, which represent some of the main aspects of a disinformation campaign: impersonation, appeal to emotion, polarization, conspiracy, discrediting and trolling.

While the ideal solution to eradicating disinformation would be for social media companies to prioritize fostering meaningful, sustained and factual discourse, I wouldn’t hold my breath waiting for systematic changes for a deception tactic almost as old as journalism itself. For now, the key to maintaining a healthy democracy is that we, as vital members of it, recognize that one of the heinous powers of disinformation is to distract us with trivial transgressions from systematic reform.

“In order for real change to happen, people must realize that we need to sustain our relationships with each other — relationships with your neighbour, or anyone that may hold a different perspective than you,” says Taylor. “An eagle can’t fly with one wing.”