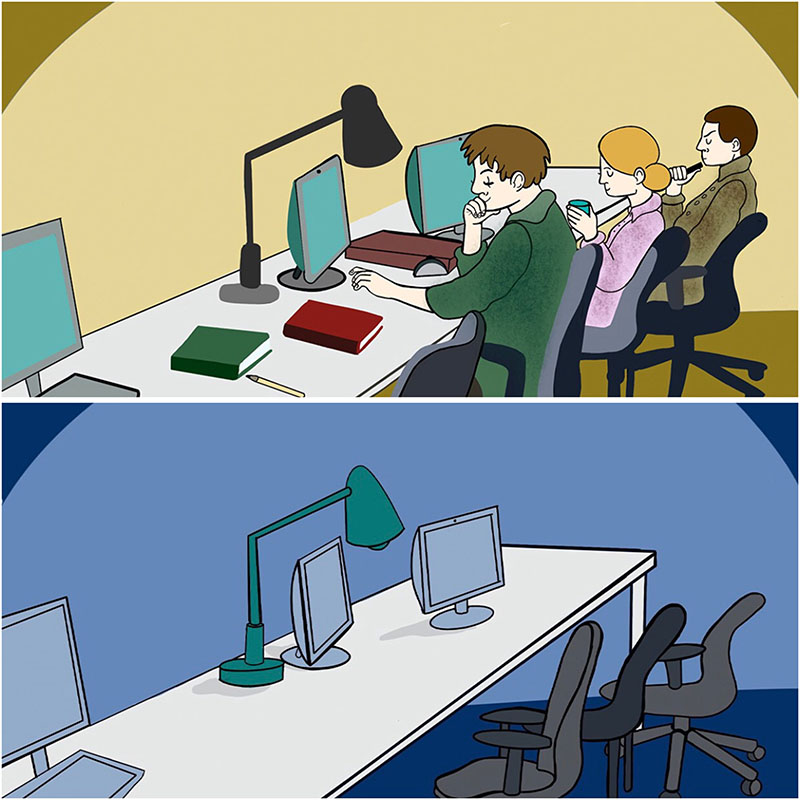 Cindy Tran, 22, began her radio career as an associate producer at CBC Ottawa in December 2020, an unprecedented time in journalism, due to the global pandemic. She knows her experience would have been dramatically different if she’d started a year earlier.

The busy newsroom full of chatter, going out into the community to witness and report the news, and conducting face-to-face interviews with sources no longer existed. Instead, there were quiet phone calls and remote interviews.

“Everyone always talks about the newsroom buzz, especially when it’s a big story, a breaking news story, but now you don’t get that, you get a really different dynamic and you have to learn how to pivot in a lot of ways,” says Tran.

Many journalists now wonder if these new practices are here to stay.

Gathering the news in new ways

All journalists, including Tran, faced the same pandemic roadblocks that many in different occupations had to work through, with in-person interactions no longer possible, a situation that Tran calls a learning adjustment

“For a period of time, CBC didn’t even go out to do any stories in person, so in that sense, you are switching over to Zoom. It’s been exhausting, but in a different sense it has also been a unique and worthwhile experience,” she says.

For Tran, going out and having conversations with people was an aspect of radio that allowed for a unique and lively form of absorbing information, but the pandemic limited opportunities to do so.

“The beauty of radio is you get to go out and meet people, and when you’re putting together these various packages and these questions and answers, you always want that natural sound in the background that really brings your stories to life, but there have been many times I haven’t been able to go out into the field because my guest doesn’t feel comfortable enough to meet up in person,” says Tran.

Nevertheless, Tran speaks on a positive note about some unexpected benefits brought by the pandemic. “As a journalist, you’ve always had to go to these scrums in-person and you’d really try your hand at making it through the crowd and talking to people you want to talk to, but now it’s just much more acceptable to do a phone interview with an expert or a Zoom call with someone who’s thousands of miles away. This gives journalists the opportunity to branch out and do more,” says Tran

Without the need to travel in such difficult times, Tran could easily do an interview from the safety of her home rather than being in a crowded room.

Tran believes that this practice of remote journalism may be the new normal for journalism, along with allowing new journalists to break the ice of nervousness when it comes to speaking to people in person.

“From a perspective of a young journalist, it gives them an opportunity to work from home and multi-task a little more with time-crunches.”

Ayesha Barmania, co-publisher of Peterborough Currents, an independent reader-funded local news outlet that serves Peterborough, Ont. and its surrounding area, has been able to work during the pandemic but, like Tran, had to cut down the time spent on in-person interviews. But some things didn’t change.

“I’m lucky to have had a home production and office space set-up from before the pandemic when I was working as a freelancer, so working from home wasn’t a big change for me,” she says. “Most of my job now and in the past is talking to people on the phone, whether it’s talking to the reporters whose stories I’m editing or sources I’m interviewing,” she says.

Barmania says a lot of teaching and networking happens when colleagues are in the same space together. Without that, things become a lot more formal and stilted, which might prevent younger journalists from asking for support.”

As well, “the main way that the pandemic has changed things is that my team has been working from home, which means we don’t have the impromptu discussions and collaborations that happen in newsrooms,” she says. “I think for younger journalists this change will be quite profound in ways that are hard to understand at this point.”

An article written by the International Federation of Journalists, (IFJ) an organization that represents 600,000 media professionals from 187 trade unions and associations in more than 140 countries, emphasizes the difficulties new journalists will face in this era of journalism when reporting virtually is heavily used.

“Not all young journalists live in a fully and technically equipped house or have the skills and training on the online alternatives to work,” says IFJ.

Although there are some roadblocks, the article goes on to speak about how this fresh new way of doing journalism online has molded itself into trends such as newsletters and podcasts that have been become more popular in the pandemic age.

“The pandemic has pushed many newsrooms to find new ways of producing journalism, making these skills more attractive than ever,” says IFJ.

Working without a newsroom

Steve Faguy, a blogger, media analyst and copy editor at the Montreal Gazette had similar experiences having to do more things remotely.

“As a copy editor, I’ve been 100 per cent remote for a year and a half. Reporters will still have to go out sometimes to cover some events and photographers obviously still have to go out to do their jobs, but everyone has just had to deal with doing stuff remotely,” he says, adding that he misses the newsroom and prefers speaking to colleagues in person rather than through Zoom and phone calls.

“It’s tough not having that casual aspect of seeing people in person. Everything is either structured through videoconference meetings or happens through text chat and email,” says Faguy.

On the other hand, Faguy has been able to work effectively from home.

“Working from home is generally more efficient. Your commute is shorter, the food is better, it’s more comfortable. I’ve had many days working from my balcony in the sun, which can be quite enjoyable. I could see many editors and reporters working part-time from home after the pandemic is over,” says Faguy.

Faguy believes the style of journalism won’t change but things that have been done to make remote reporting easier, for example, having court hearings or other meetings stream online could lead to more remote work for journalists.

The future is unknown but we’ve seen from the past that journalism has continued to evolve with any situation presented.