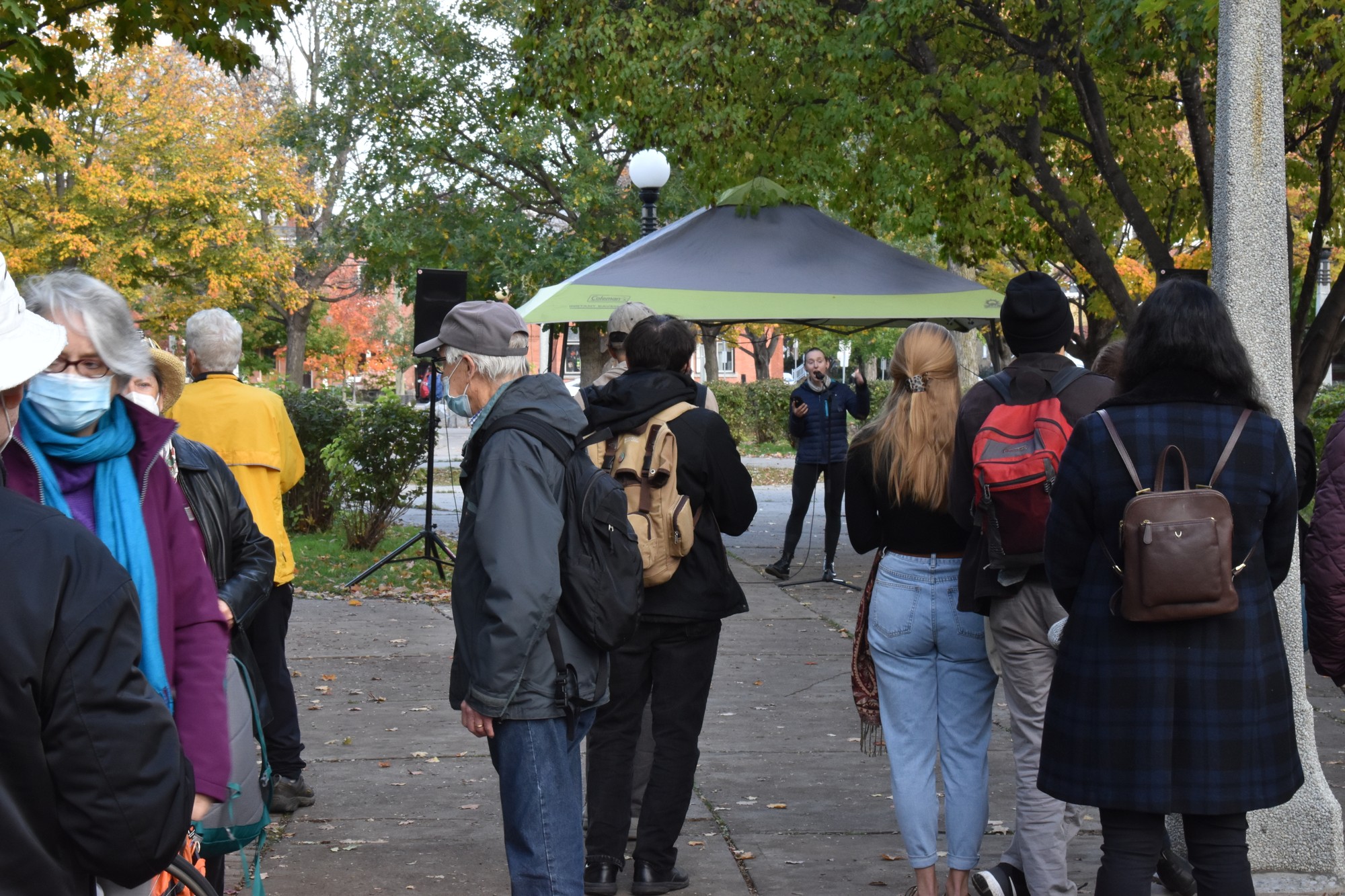 The Organizing to Win the City rally held on October 24, 2021. Horizon Ottawa, the group that put the event together plans to campaign in the 2022 municipal election.
Photo by: Brett Thoms

On October 24, 2021, I attended a gathering of local activist groups in Ottawa at Minto Park. The gathering was entitled Organizing to Win the City. Booths were set up representing groups organizing to fight for various progressive causes. The roughly 50 attendees ranged from university students to retirees. Organizers and aspiring local politicians mingled among the crowd in the centre of the park while a small group of children played on the periphery. At the front of the gathering was a sound system so that representatives of each group could address the crowd about what they were fighting for.

I attended this event because I’m interested in democracy and how it might be improved. Ottawa, Canada and the world face a lot of crises, but most politicians and corporations don’t seem to be contributing to real solutions. Whether it be climate change, eroding democracy, growing wealth inequality or marginalized groups lacking human rights, I find it hard not to believe that contemporary politics is mostly just theatre. It’s easy to resign yourself to this feeling, stop caring and focus on mindless entertainment. If no one else is doing anything, what difference will you make?

But people are trying. Groups working on a range of causes are currently active in the city, with many being run and staffed by students. These local groups rely on people power to spread their message.

Here are just some of the people and groups pushing for a better future for their communities in Ottawa. 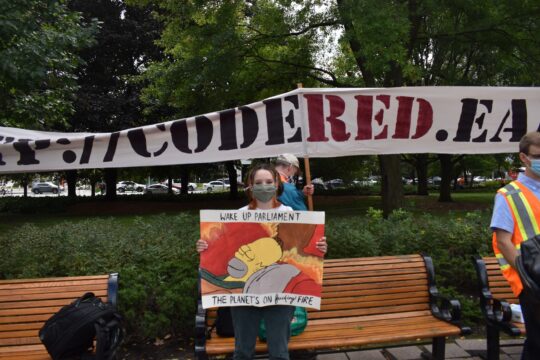 Just a month before the October gathering, the environmental group Fridays For Future Ottawa organized a climate strike to protest government and societal inaction on climate change. Two high-school students, Simon Lindsay-Stodart and Sarah Scott, both 17, were leaders of both the march though downtown Ottawa and speakers at a rally in front of the prime minister’s office.

Scott carried a sign showing Homer Simpson sleeping in a burning house. “Wake up parliament, the world is fucking on fire” read the sign’s caption.

“I really want a planet to live on and I also want to have something healthy for my kids because right now our generation is going to be the last one to live our full lives. I think this is more important than one day of classes,” says Lindsay-Stodart, holding a megaphone he brought to the rally. 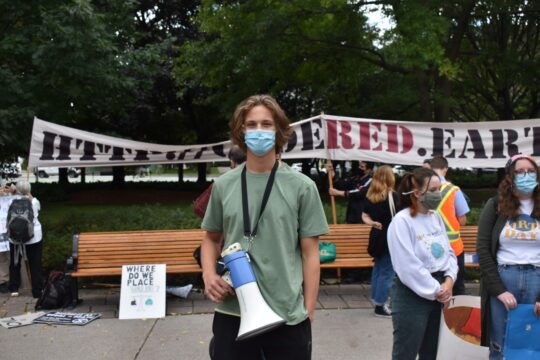 “If we look at the last election obviously Justin Trudeau has promised a lot of action for the climate, since 2015 even, but he hasn’t delivered,” says Scott. “Our emissions have increased in the past few years and we aren’t on target for the Paris Accords. So, getting out here is about showing the seriousness of the problem.”

Scott wants to see drastic and immediate action to cut emissions. She wants a just transition for workers in the fossil fuel industry, to protect greenspace and end logging in Fairy Creek, British Columbia.

“We need to cut emissions as fast as possible. If we started doing this in 2010, we would have been able to have a less steep curve going from where we are to where we need to be. Since we’ve waited so long, this is the kind of action that is required. It’s very easy to be pessimistic and feel that there is nothing you can do so you might as well not try, but while we do have a time constraint of what we need to do, there’s still time.”

Fridays for Future is just one of many local groups focused on combating climate change, with others being Climate Justice Ottawa, Below 2C, Reimagine Ottawa and Leadnow, among many others. However, local activism is not limited to climate groups and includes various civil-rights organizations. 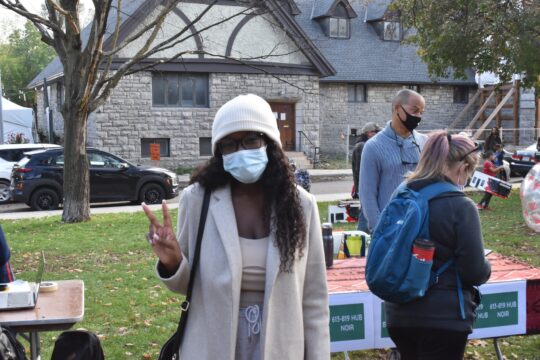 Asilu Collective is an anti-racist feminist group in Ottawa that formed to remove the School Resource Officer (SRO) program from Ottawa public schools.

The SRO program “was a 20-year program that placed armed police in schools,” says Maya Basudde, a Child and Youth Services student at Carleton University who works with the Asilu Collective. On her website, she describes herself as artist, activist, public speaker, healer and educator.

The group’s work brought success: The SRO program was terminated in June 2021 after a campaign mounted by the Asilu Collective.

“We showed up in our community in so-called Ottawa to every funding meeting the Ottawa Carleton District School Board (OCDSB) had and spoke in favour of removing the program,” says Basudde. “We collected a lot of testimonies from students who were deeply affected by this program. We also had a report that detailed the effects of the program on youth and how it’s impacted them. We had a lot of pushback from councillors who were on the board of the OCDSB. We were able to get them to abolish the program and promise it would not return.”

“Right now, we are working to ensure that there are not any alternatives to the policing in schools’ program and that they are actually working towards restorative justice instead,” says Basudde. (Though there are different definitions, according to the Canadian Department of Justice, restorative justice “seeks to repair harm by providing an opportunity for those harmed and those who take responsibility for the harm to communicate about and address their needs in the aftermath of a crime.”) 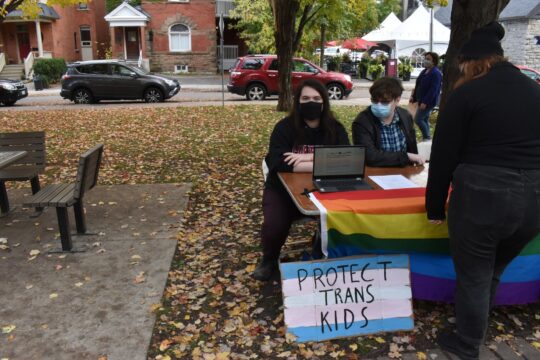 “Ultimately our lives are on the line with every election whether that’s municipal, provincial or federal,” says Christian Wright. Photo credit: Brett Thoms

Christian Wright is a member of the 2SLGBTQIA+ community, and a fourth-year student at Carleton University who currently runs Rainbow Carleton, an organization of more than 440 queer students attending the University of Ottawa, Algonquin, Carleton and even some still in high school.

“Essentially our organization focuses on providing community, activities and services to that group of post-secondary queer students,” says Wright. “The immediate practical goal is improving the lives of queer and trans post-secondary students here in Ottawa and to a larger extent queer and trans people in general. That’s why we ran the protect trans kids who counter protest against a bigot who came to Ottawa to harass children at a Nepean high school and Broadview Public School, so we scrambled out there to protect trans youth and students even though they’re younger than us.”

“Our strategy is just focusing on people. We have amazing volunteers, we have 440 members, which gives us a pool of people to reach out to when we need help doing something,” says Wright. “We want to do as much education and community work as possible. We have an upcoming potential mailing campaign where we will be providing information on transition, trans youth and hormone replacement therapy to houses here in Ottawa to counteract a misinformation campaign that’s going to be happening soon as well.” 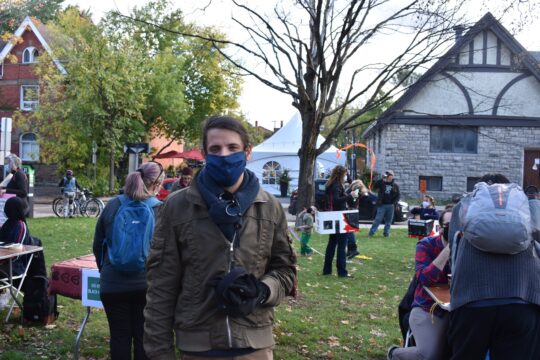 “I do think there a lot of momentum and people are seeing there’s an actual shot that there can be a more progressive city council than there has ever have been,” says Sam Hersh, board member of Horizon Ottawa. Photo credit: Brett Thoms

Being social movements, groups like those described above don’t necessarily have the same direct impact on political change as elections. That’s where a group called Horizon Ottawa seeks to play a role.

Horizon Ottawa’s website describes its mission as cultivating “local solidarity around socially and economically progressive priorities so that Ottawa can become a city where everyone can thrive.”

“We started with a room full of folks and we’ve grown to about 350 members,” says board member Sam Hersh. “We started when we released a report on developer donations and the councillors that accepted donations, and how that’s connected to the decisions they make in council. “

“We’re making sure we build a broad coalition and we can use that power to elect more progressive councillors in the next elections,” says Hersh. “A big goal, at least in my view, is to bridge the gap between social movements and electoral politics because there are a lot of people who are involved in social movements, not electoral politics, but they are really good at organizing.”

Wright of Rainbow Carleton agrees with this strategy that focuses on channeling social movement organizing into electoral power. “Ultimately our lives are on the line with every election, whether that’s municipal, provincial or federal,” says Wright. “All of these levels of government make decisions that affect our lives and our health. So, as we move towards the provincial and municipal elections, we’re definitely looking at how we can get more involved with organizations like Horizon Ottawa, whether we’ll need third-party status, all sorts of stuff like that. I can actually see us leveraging our membership to develop policies that are good for queer and trans people.”

Horizon Ottawa plans to “use that power of social movements to win in specific wards,” says Hersh. “There are a lot of things people don’t understand because it’s not accessible. We’re trying to educate people, help them build teams.”

“We’re really going to focus on getting progressive people elected on the municipal because that’s where progressive change has been happening when we look around the world,” says Hersh, referencing the victory of a municipalist political movement in Barcelona as a model for implementing durable political change in Ottawa.

“A lot of local politicians use the fact that municipal politics are so inaccessible to their advantage and they make it so people don’t actually know what’s going on,” says Hersh. Horizon Ottawa plans to counter this through visually appealing social media graphics and strong organization campaigns throughout the city.

“I do think there is a lot of momentum and people are seeing there’s an actual shot that there can be a more progressive city council than there has ever have been,” says Hersh.

This is only scratching the surface of the movements in Ottawa working towards making a difference in the city. Whether they’re addressing climate change, racist policing, discrimination against trans people, or a corrupt municipal government, a diverse range of people are at least trying to do something. Being involved in these groups seems like it provides both a sense of purpose and community to the people I spoke to.

They provide a model for civic engagement beyond just voting every couple of years or posting on social media. To me, it looks like what democracy should look like. Despite the current suboptimal state of the world, the collective efforts of these featured groups are a cause for optimism.