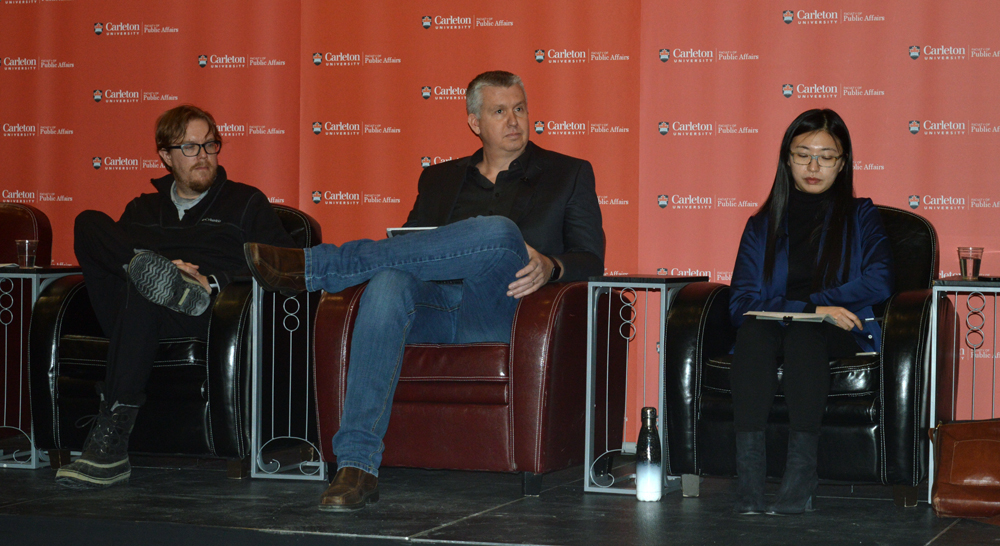 Media is an ever-changing landscape, especially in Canada. With the onset of media giants like Google and Facebook, there are many opportunities presented, but they can come with many issues.

This was the overall focus of the media panel hosted by Carleton University on March 5. It was moderated by journalism professor, Dwayne Wesnick.

The event was held as a part of the faculty of public affairs’ research month.

There were many angles and views presented during the panel, including those of Jesse Hirsh, who has 25 years of experience as a technology researcher and a futurist.

Hirsh, currently situated in Lanark County, focused on Facebook, says that automatic publishing created by the platform means no one needs prior knowledge of coding. But that also opens the doors to automated advertising.

Canada has improved on is its telecomm sector, according to Sheehan Carter, director of television programming at CRTC.

“Despite difficulties and diverse range,” says Carter, “we have fantastic coverage across the country and data speeds do well. We certainly have problems, particularly with marketing practices, but we hope to address these challenges in the near future.”

Valerie Steeves, professor of criminology at the University of Ottawa, used privacy as a counterpoint to social media. She used the example of the phrase ‘stranger danger’ as it is presenting more of an issue in today’s society.

“15 per cent of kids we surveyed have admitted meeting strangers they met online in the real world,” Steeves says. “Our motivations as researchers are to try to give young people a voice in the regulation and technologies that are becoming important to them.”

“This became the sort of poster child of ‘if we don’t regulate the internet, children will be abducted or killed in white vans,” Steeves says.

Ben Klass, a leading internet and communications policy researcher, analyst and advocate, says the internet is more important today and in the future than it has ever been.

“Access to reliable telecommunications systems is essential today,” says Klass. “Without the internet, there is no Facebook, no Google and no Netflix.”

Len St. Aubin, former director general of telecommunications policy at Industry Canada and current consultant for Netflix Canada, says there is an increase in the amount and usage of major platforms in Canada. We need to put more focus on media in the country and change the way we think about the media itself.

He used an example of a fellow professor, who watched 10 hours of Netflix every weekend, but focused on only watching and rating Canadian content on the platform.

Research month at Carleton is going on until March 24. For more information on upcoming events, you can visit Carleton’s Research Month page.