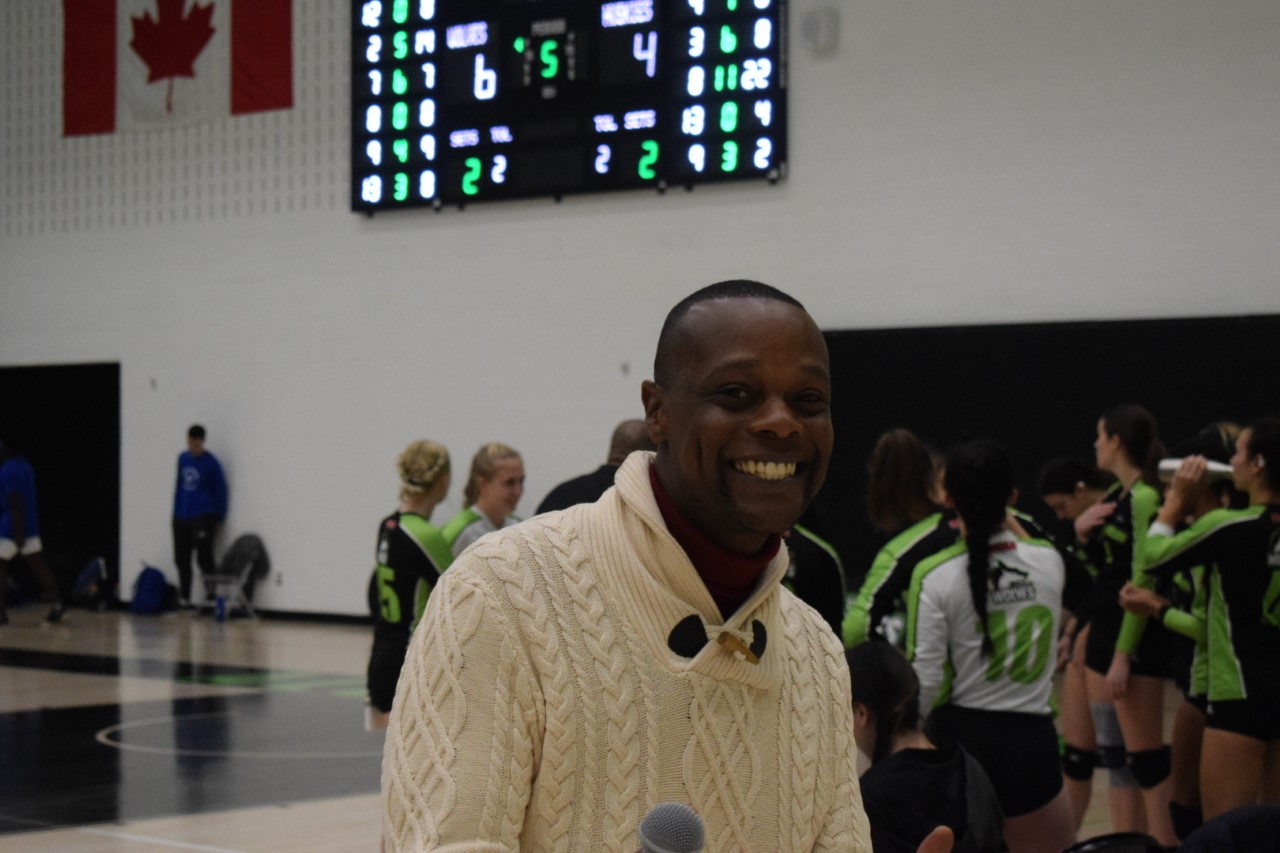 Vikta "the voice" Paulo, 37, has been announcing sports games since 2005. Here he is at a recent Algonquin Wolves women's volleyball game at the Algonquin College Athletics and Recreation Centre.
Photo by: Liam Fox

When Vikta “the voice” Paulo is on the microphone, he is fully in his element. His booming voice energizes the crowd, no matter the size, as it travels around the Algonquin College Athletics and Recreation Centre gym, and he always does it with his trademark smile.

Paulo, 37, was raised in Ottawa after his family fled from the Ugandan civil war and spent five years in Nairobi before immigrating to Canada in 1990. The Paulos were a hard-working family of five who soon became rooted in the Ottawa community.

Paulo started announcing games back in 2005 for Vanier College because he wanted to get paid to watch his friends on the varsity basketball team in the best seat in the house. Little did he know announcing would take him across the globe and give him the opportunity to work at some of the most prestigious sporting events in the world. But Paulo says announcing is second nature to him.

“Anyone can do this,” says Paulo. ”How do you do this all the time? People ask, but I’m just talking. I’m just talking into a microphone. I’m just explaining what I’m seeing in front of me. That’s all I’m doing.”

Paulo is completely self-taught. He did not go to broadcasting school and was not mentored by any trained announcers. His passion for sports and enthusiastic personality was all he needed to find success.

The same success made him the voice for the Carleton Ravens as they won seven championships, the Algonquin Thunder and Wolves, the Ottawa Blackjacks, the Pan-Am Games, the World Para Powerlifting competition and the 2016 NBA All-Star Game in Toronto, among many other team events.

But on Paulo’s crowded resume, he holds no favourite experiences from all the opportunities he has had announcing because to him, they are all special in different ways.

In 2016, Paulo got an unexpected last-minute call asking him to announce at the NBA All-Star Game in Toronto.

“I remember making that trip down with my wife before we got married, and it was just us and my old Honda Accord which I had because this opportunity came down the pipeline last minute. So I didn’t get a chance to get a rental and have a chance to really prep, it was just let’s pack our bags and go to the all-star game,” Paulo reminisces.

The 2016 NBA All-Star game is often remembered by fans for many reasons; it was Kobe Bryant’s last of his 18 all-star games, it was the first and only NBA All-Star Game held in Canada and its Slam Dunk Contest is generally regarded as the best in the league’s history. But Paulo remembers it most as being extremely cold.

“I remember I was to talking to Kobe, Lebron, or anyone I met, it was the same line I was like ‘man sorry our weather is so bad’ and it was my icebreaker. They always would laugh and say ‘it’s all good’ and gave me a little dap and kept moving,” he says. “It was just one of those moments where it’s like you gotta pretend like you’ve been there before.”

Looking back, Paulo wishes he took more pictures of what he describes as a “bucket list” experience.

Despite his major accomplishments, it has not always been smooth sailing for Paulo in his announcing career, making him more resilient. In 2012, Paulo was dropped as the announcer for Algonquin College and Carleton University varsity sports, which he had been doing for five years.

“That’s kind of your identity right? You’re the Carleton announcer, you’re the Algonquin announcer. And then from being all of that to nothing, it’s like what do you do,” says Paulo. “That’s where I kind of learned how to reinvent myself.”

Soon after, Paulo was getting opportunities to announce Drake’s OVO tournament, the Pan-Am games and the NBA All-Star Game.

”It was a tough time, but I mean, tough times either break you or pressure makes diamonds. So I like to think I’m someone who’s made of diamonds,” says Paulo.

Paulo is now back to announcing his beloved Algonquin College (he is an alumnus) basketball and volleyball games, where he started announcing for the team when he was a student.

“I think there’s nothing like a Friday night at the ARC when the Wolves are playing,” he says. ”It’s a pretty surreal feeling. Having the whole crowd rock ‘defence’ or ‘let’s make some noise for your Wolves’ and everyone makes noise. It’s super neat.”

“For me, it’s really important that we have a tradition of winning,” says Paulo. “I wasn’t a player who put my blood, sweat and tears towards a banner but I sure gave a lot of my lungs and voice for those home games.”

Paulo is also a proud father and husband. His 4-year-old daughter is, he says, a perfect mix of his wife and him; thoughtful and kind, like his wife, and competitive, similar to him.

“She’s the absolute love of my life. She means the world to me,” says Paulo.

Some of Paulo’s competitive spirit is derived from his time as an athlete, when he was the first-ever quarterback for the semi-pro Ottawa Invaders, now the Sooners, and played at the collegiate level for Vanier College.

“I loved playing quarterback. I was a baller,” he says.

Paulo says his experience as a competitive athlete gives him more appreciation for athletes he announces for, because he knows how hard they work. One of Paulo’s favourite parts of announcing is the player interaction and watching athletes grow.

”It’s always nice for me, that little bit of connection you can get with the players,” he says.

In the near future, Paulo would like to dedicate his announcing career to mentoring aspiring announcers and traveling the world. Specifically, Paulo has the goal of announcing at the 2024 Summer Paris Olympics.

But for now, you can always find Paulo on Friday nights at the Algonquin College ARC, pacing up and down the court with his big smile, cracking jokes with the players and coaches as he calls the game for his hometown Algonquin Wolves.