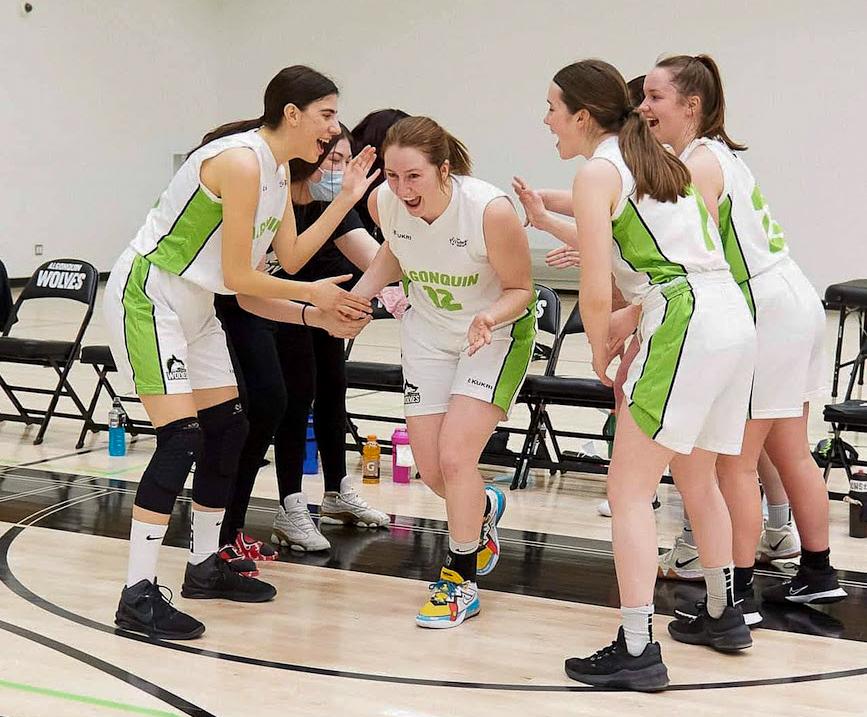 Jennica Klassen enters the court with her teammates cheering her on.
Photo by: Tyler Major-Mcnicol

The squeak of a fresh pair of sneakers on the court, the swoosh of a perfectly shot basketball hitting nothing but the mesh, and the referee’s whistle signaling the tip-off of a new game.

For 24-year-old Jennica Klassen, these noises are like a beautifully strummed guitar fret to a musician or a masterfully plated dish for a chef. While she was a student juggling athletics with her studies in the Algonquin College public relations program from 2020 through to 2022, game days brought forth excitement and a pack mentality, as the Algonquin College Wolves Women’s basketball prepared to clash with their newest opponent.

Klassen cites organization and planning as two big pieces for her success as a student, both in the classroom and on the basketball court – this successful approach to life has also carried over into her career as an account coordinator at Kit, an Ottawa public relations firm. A delicate balance of studies and athletics was precisely how she was able to keep pace in her college career. As for her professional career, Klassen’s positive attitude allows her to thrive when communicating with clients. 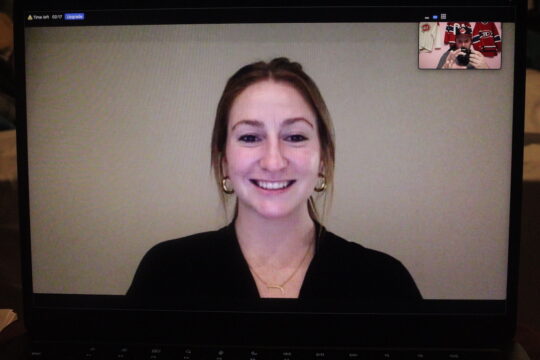 “Time management is definitely going to be your best friend,” says Klassen with her water bottle in hand over a Zoom meeting. “I was lucky and growing up my mom and dad always had my brother and me in tons of things — I never played just one sport — I was always a part of clubs in high school and middle school and took part in organized sports. Having a lot on the go was natural for me, and switching over from the University of Ottawa to Algonquin College. I was used to the heavy course load and so I like being busy.” Klassen felt the switch from university to college was more in line with her interests, as she wanted to pursue a career as a public relations professional.

Klassen is also aware that not all student athletes can handle everything so well, and she believes that one thing, in particular, is going to be a big tool for them.

“Time management,” she says. “The calendar is going to be your friend as well. Try planning out for the month ahead. That way, nothing creeps in or surprises you.”

While keeping organized and on top of assignments and the playbook is crucial, Klassen also feels that the relationships she established with her professors were a large part of her successful college experience. Communicating openly with professors and being transparent about whether or not you can meet deadlines can or require extensions helps keep stress to a minimum.

“I’d consider Steven Heckbert one of my mentors. He was just so involved and we would have 15 to 20-minute talks. I think they were supposed to be career coaching but we’d sit down and we’d talk. I’m talking about all my friends this year and whatever is going on,” she says.

Klassen’s fighter mentality and captain-like qualities endeared her to her teammates and her basketball head coach, Jaime McLean. She was a fierce competitor and had a knack for rallying her teammates behind her, which earned her the nickname Mom.

“I did hear the ‘Mom’ nickname thrown around a couple of times last year. Besides her age, she truly cared about her teammates and their success,” says McLean, still head coach of the team.

“Jennica was originally to join during the season we lost to COVID-19,” says McLean. “She was passionate about having the opportunity to play post-secondary and came in ready to compete. She brought maturity and competition that instantly started to make her and her teammates better.”

While Klassen is a positive person, she does have days where she needs a pick-me-up, and music is an outlet for her. She cites one song in particular as a beacon for positivity and smiles.

“My general life song is ‘Sun Is Shining’ by Axwell Ingrosso,” says Klassen. “So the main lyrics are — Sun is shining and so are you — and I’ve always loved that song. I think it really speaks to me. If ever there are days where I’m going through a tough time I play that song to make myself feel better.”

Hard work is a big factor for success in life if you wish to achieve your goals. But Klassen feels there’s a specific element that is as important as hard work.

Her positive outlook and hard-working mentality endeared her to many, especially her friend and former teammate, Jade Lyons, a second-year Bachelor of Early Learning and Community Development student at Algonquin and member of the basketball team.

“When thinking about who Jennica is as a person, I truly am grateful to have met someone as inspiring as her,” says Lyons. “Jennica continues to work hard at whatever it is she sets her mind to, but she also knows how to have fun when it comes down to it. We definitely miss her out on the court this year, but it’s nice to see our mom in the stands.”

For Klassen, balance, organization and a love for what she was doing were all important parts of her time as a student-athlete, but it was her drive to win and her love for the team that pushed her through a busy schedule.

“Jennica’s desire to not lose was probably the biggest thing that stood out about her,” says McLean. “That constantly drove her to be better, which helped to make her teammates better.”

“I was like the mom on the team and they were all my little kids. It was such a great group of girls and we all got along so well. It was the most amazing year I could have imagined,” says Klassen, about her love for the team. The positive attitude that Klassen exhibits has continued to help her thrive as a public relations professional, as she is able to easily connect with clients during public relations events, which helps with networking.