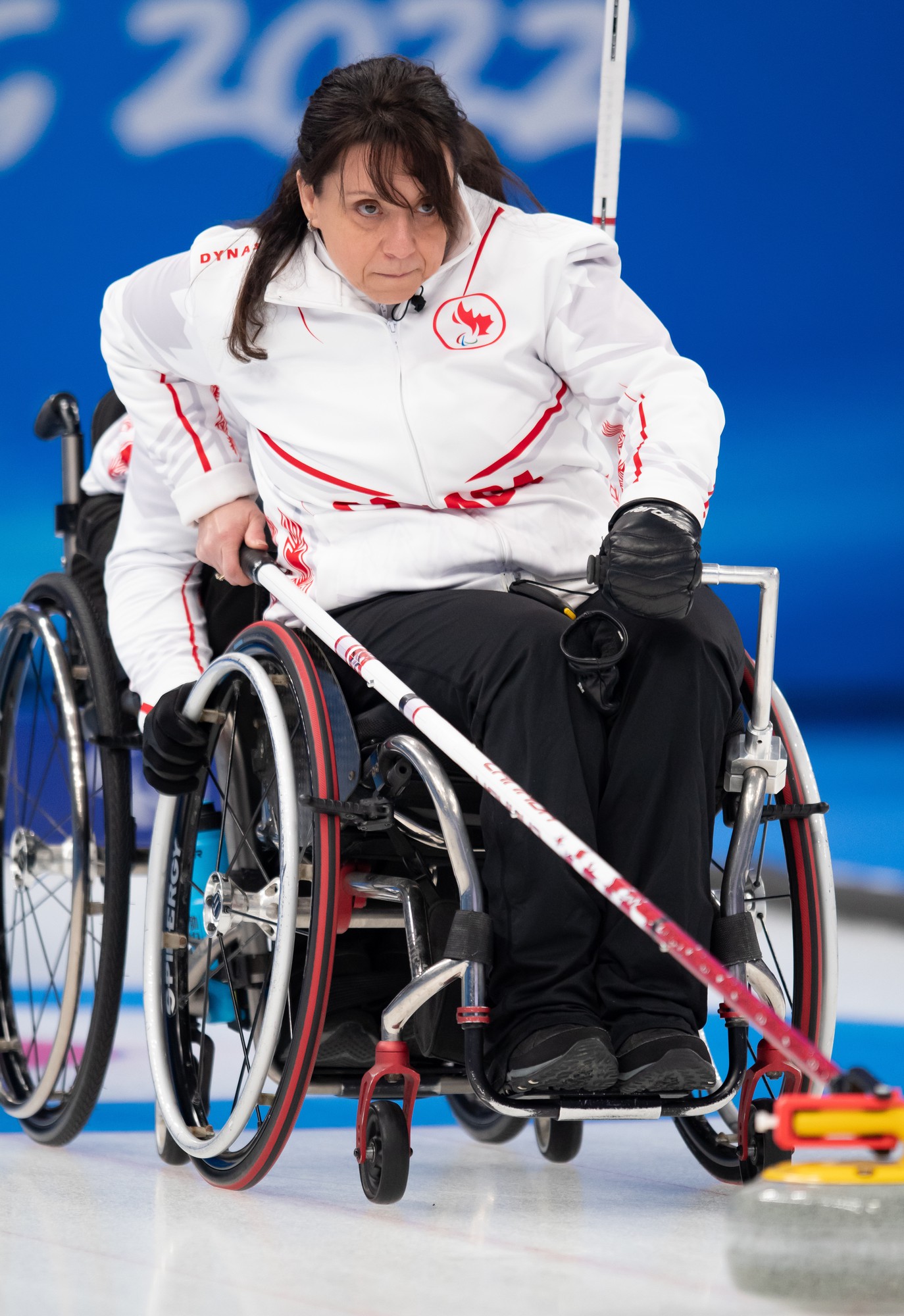 Collinda Joseph has a wonderful, warm laugh that puts you at ease immediately. I think we both needed that. I was very nervous about interviewing the 57-year-old curling champion, who won bronze at the Beijing 2022 Winter Paralympic Games. When I ask her “How has your morning been?” Joseph says, “busy.” If you know anything about small talk, any answer other than “it’s been fine” to that question means something catastrophic has occurred and that person would prefer to be anywhere other than here.

I then ranted about Argentina’s calamitous performance against Saudi Arabia at the FIFA World Cup (which had taken place in the early morning before our interview), and Joseph did exactly what you should when faced with an emotional sports fan. She laughed. Her face broke out into a massive grin. Her eyes squinted and she chuckled, very merrily, at my expense.

A Paralympic bronze medal is far from the only accolade Joseph can point to. She also has a silver medal from the World Wheelchair Curling Championships world championships for example. But she is more than just a great athlete. Outside of sports the Algonquin College alumna has been awarded the Queen Elizabeth II Diamond Jubilee Medal, the Celebration of People’s Community Leader Award, the Commonwealth Youth Secretariat’s Youth Service Award and Carleton University’s Honour Award for Service, all for her work as an accessibility advocate. Though you would never know she is so decorated if you talked to her.

“Collinda is a quiet and unassuming person. But behind that is a hard-working, determined, loving person with a wonderful sense of humour,” says Jack Doyle, General Manager of the Algonquin College Student’s Association and namesake of the Jack Doyle Athletics and Recreation Centre.

The two have been friends for close to 30 years.

“Jack Doyle is one of the best people ever,” says Joseph. “The new building is named after him and I have to admit I tease the hell out of him about the building. I say ‘Can I have your autograph?’”

It certainly requires determination and hard work to face and overcome the adversity Joseph has. In 1983, she lost the ability to walk at the age of 18 when she was injured in a train accident in France. The accident also took away her first sporting love: Diving.

“It was really hard,” she says. “Going from being a competitive diver to thinking I’d never be able to participate in any sport again was an incredible shock. Losing the ability to dive, which was my love, was heartbreaking.”

In the years of recovery after the accident, Joseph struggled to find her next calling in life. “I took a coaching course after my accident, so I could just get out and try to coach people in diving. I did it for four or five months but I found it really hard. I just found it hard being back in the pool and not being able to demonstrate a move or feeling like I’m really missing this. So, I just stopped,” she says.

For the mere mortal, this would be an end, but to hear Doyle tell it, Joseph is no mere mortal. “Her strongest characteristics would be that she places no limitations on her skills and possibilities. She demonstrates this by focusing on what she can do and not what she cannot.”

Hindsight tells us Doyle knows his friend well because Joseph wasted no time finding another passion. Through an occupational therapist at her rehabilitation centre, Joseph found, as she puts it, “this whole other realm of parasports.” These included track and field, tennis and basketball, to name some. “He encouraged me to take part in all of the stuff so I just tried everything.”

Eventually she settled on one.

In wheelchair basketball, Joesph’s height didn’t matter. “It was a lot of fun and actually it got passed down to my kids. Both my daughters were competitive basketball players for many years.”

So, there we have it. Injury overcome, new sport chosen. But up popped another obstacle Joseph had to roll with, pun intended.

“I started to have a lot of shoulder issues, and not wanting to ever use a power wheelchair I thought, I need to save my shoulders,” she says. “So, I was looking for another sport that was a competitive experience and they just happened to be doing a Give it a Go event for wheelchair curling at the RA Centre here in Ottawa.”

Joseph was instantly hooked. “Right away it was something that I felt like I could do well and I just really enjoyed it. That was in 2005, I got onto a team in 2006 and I got into the national team program around 2014.”

She is actually shortchanging herself. According to her page on the official Canadian Paralympic Committee website, “Joseph has been invited to national team training camps since 2012 and her first selection to Team Canada was in 2019.”

Joseph was part of the 2019, 2020, 2021 World Championships for Canada but the highlight of her career came in 2022. She was selected to participate in the Beijing 2022 Winter Paralympic Games.

Becoming a bronze medalist was the culmination of many years of hard work.

“Being named to the Paralympic team and then actually going there and having the team win a bronze medal to me is still a once-in-a-lifetime opportunity,” says Joseph. “When you talk about bucket lists, it’s one of those things that’s usually not on anyone’s bucket list and to actually have that be something I accomplished is pretty amazing.”

Joseph’s greatest hurdle was the mental preparation she had to undertake.

“80 per cent of my effort was in that realm,” she said. “The support we had from professionals in that area was priceless in preparing us for the Paralympics and actually being able to get there.”

Joseph’s bronze medal wasn’t the only thing she won in 2022. A few days after returning from Beijing, she received some remarkable news. She had been awarded the “Changing Lives” award, part of Algonquin College’s Alumni of Distinction Awards, for both her outstanding achievements on the ice and her work promoting accessibility.

“When I saw the email that said I won it, it was a complete surprise.” she said. “I thought this must be a joke.”

Months later Joseph is still sheepish and embarrassed to talk about the award.

“It was really humbling, to be honest. I didn’t think I had accomplished much in work life but then when you start to actually see it written down you realize you’ve had more impact than you actually thought. So, I was thrilled and surprised and humbled and embarrassed and all those things that go along with something like that. Being recognised for that work was pretty incredible,” said Joseph.

Joseph’s work in accessibility began in 1986 when she became a member of the board of directors for the National Educational Association of Disabled Students. Two years later she was the President.

Spotting an opportunity to continue her positive impact Joseph began working for Employment and Social Development Canada and specifically in the Office for Disability Issues.

“I jumped on the position in the federal government but then I still connected with the community. I still continued to do that work in the community because I realised that my voice had value. There was a ton of work that we needed to do to improve the community for people with disabilities,” said Joseph.

Once again Joseph’s determination and focus came to the fore as she turned her attention to accessibility. In May 2019, she began working as a team manager at Accessibility Standards Canada.

“Then I got involved with accessibility generally. Accessibility of buildings and spaces,” she said. “I just realised how important that was and I learned a ton about what it is to be accessible. My knowledge of functional uses of spaces was really important and it helped me to educate people. I was using my own personal experiences in making sense of the world for people that were designing it and trying to make it better for everyone.”

“That kind of snowballed and helped to develop my career. It actually got me to the position where I am today, working in standards development and creating requirements that would improve lives of people with all kinds of disabilities, not just people who use wheelchairs,” said Joseph.

“Collinda would first remind us that not all disabilities are visible,” says Doyle. “Next, Collinda would remind people of all abilities, that many of the limitations in our life are figments of our imaginations learned somewhere along the way, and that we need to live our lives pursuing our dreams. This is not just what she does. This is who she is. Collinda’s work to improve accessibility is just one example of her desire to help others. She is a beacon of light to all who know her.”

Collinda Joseph. What has she already done? Changed the community for people with disabilities. Check. Won a bronze medal at the Paralympic games. Check. Won a silver medal at the world championships. Check. Played wheelchair basketball for nearly two decades. Built a family, raised two daughters, gave her time to a young reporter and mastered the art of laughing. Check.

What can’t she do? One obvious answer is dive. But if wheelchair diving becomes a sport, she’ll probably do that too.