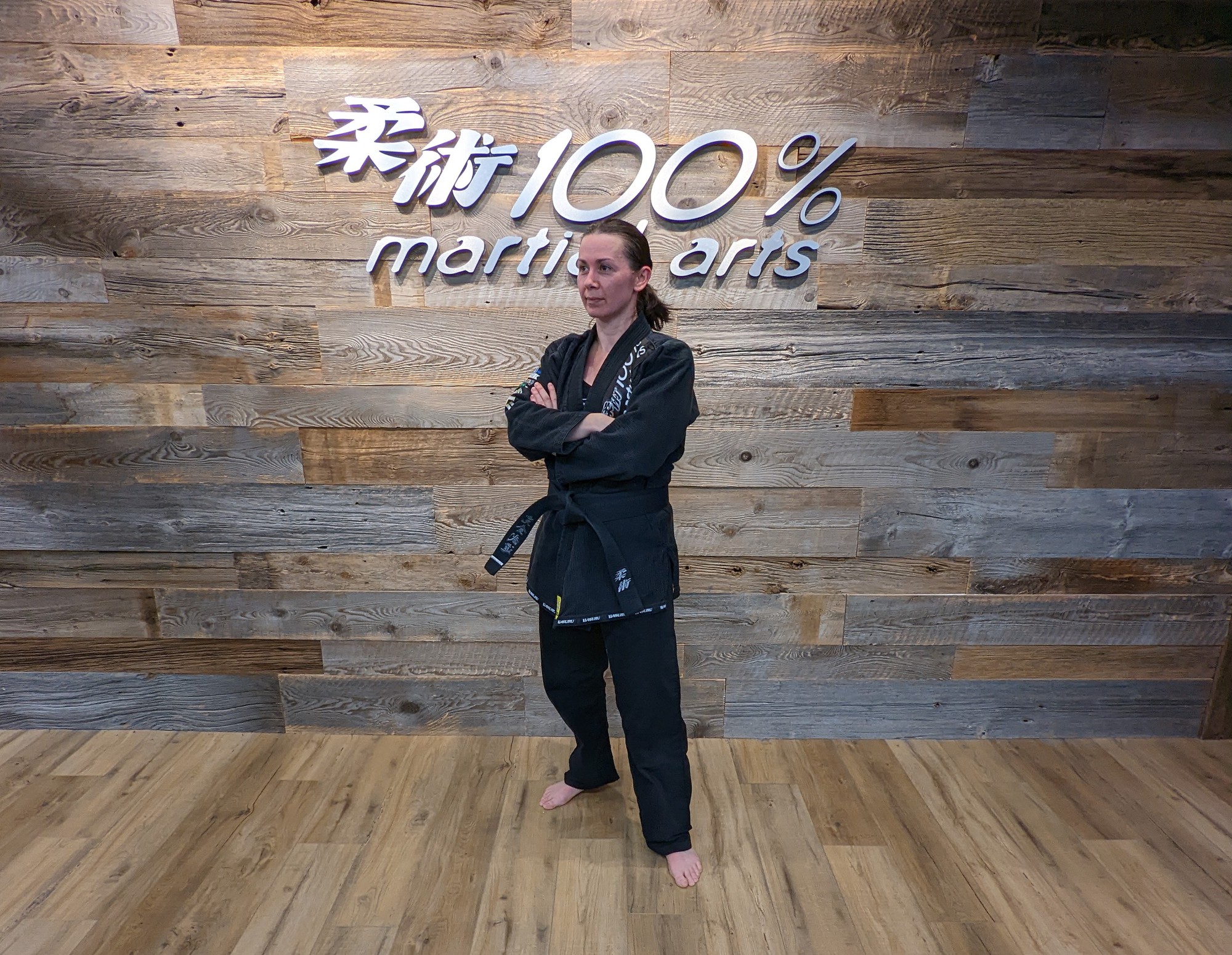 Stephanie Schreiber spent half a decade earning her black belt in Jiu jitsu. Now, when not at her day job helping to fix the RCMP, she's passing on her knowledge to the next generation of Ottawa's martial artists.
Photo by: Nathan Drescher

Every Wednesday evening in Ottawa’s south end, a diverse group of children clomp their way down a narrow flight of stairs to a below-ground martial arts dojo called 100% Martial Arts. They are here to learn Jiu-jitsu.

The underground studio is softly lit and industrial-chic. There are jet black pipes above and a faux brick wall along the left side of the dojo. Ceiling-to-floor mirrors adorn one entire wall and punching bags dangle from wooden beams. The place was recently renovated, with some of the staff and its hardcore martial artists helping out.

“I helped do the bricks,” one of those patrons, Stephanie Schreiber, tells me. “Oh, and the floors, as well.” Schreiber, wearing a black gi, the traditional smoothed cotton outfit of martial arts, with a black belt cinched around her waist, stands in front of the children, who are mostly wearing blue gi and yellow belts. Schreiber, in her early 40s with shoulder-length dark hair and serene brown eyes, exudes a calm energy and makes everyone around her feel a little more at peace with the world. She moves easily with purpose and commands the room when she stands. It’s a useful demeanour when dealing with children. They are seated on the thick, dark grey mats which cover most of the floor in the dojo, looking up at Schreiber with wide eyes. They have come to learn Jiu-jitsu, and Schreiber is their sempai, their teacher.

The dojo is normally a serious place where people learn combat skills, but when Schreiber is here with the children, the mood is completely different. There’s laughter and excitement. The kids are adorable in their baggy outfits. Schreiber eases them through a series of movements. Today they’re learning how to deflect a punch and put an attacker on the ground. Schreiber demonstrates the technique several times with an assistant, then pairs the children up and guides each set through slow-motion versions of the moves.

“I’m a mom,” Schreiber tells me while having coffee in the spacious kitchen of the large south-end house she shares with her husband, Steve, and two teenagers. “Teaching kids comes naturally to me. It’s the adults I have to keep my eye on.”

Schreiber’s own children, Anna, 13 and Max, 15, are both students at the dojo. So is her husband Steve, who is also a Jiu-jitsu blackbelt by night and a government IT consultant during the day. “Stephanie is badass when she gets going,” he told me. “Don’t let her friendly mom persona trick you. She’s basically Wonder Woman.”

Schreiber never set out to earn a black belt, which is the top of the food chain in martial arts. She started Jiu-jitsu six years ago as a white belt, the very first level.

“I began because I wanted something we could do as a family,” she says. “The kids were younger then, and we would go twice a week. Then I just kind of took to it.”

Generally, Ottawa’s martial artists attend a dojo a couple of times per week. It’s a great form of physical fitness and is known for its amazing mental health benefits. More importantly for many is the sense of community and the strong bonds of friendship formed at these dojos. Students progress through the ranks of their chosen martial art at their own pace, denoted by a variety of coloured belts and gi. Whether a person focuses on advancement or is there for their own benefit depends on their motivations.

Schreiber advanced through a dizzying array of belts and stripes, improving her combat skills and gaining confidence along the way. “I used to be afraid a lot,” Schreiber told me. “You know, I wouldn’t go out alone at night and if anybody had come at me, I don’t know what would have happened.”

“But now I don’t even think about it. It’s hard to explain. I see the world differently now. There are not many people out there who could hurt me now.”

She attributes this change fully to learning Jiu-jitsu. When she earned her black belt after a four-hour examination in front of a tribunal of Jiu-jitsu experts, she said she felt thrilled, but at the same time realized she had earned this herself.

“It took years,” she says. “I started off just wanting to do something different, and it gradually became this unconscious goal of mine to advance, to keep getting better, to keep getting those belts.”

Jiu-jitsu is not an easy sport. It dates back to eighth-century Japan and was designed as a way for unarmed peasants to defend themselves against well-armed samurai. It consists of a mix of sumo and other martial arts, with a strong focus on self-defence. There is a lot of grappling involved. A lot of flipping and falling and blocking.

“I’ve definitely been hurt on the mats,” Schreiber tells me. “I once fractured my hip, and another time I twisted my back so badly I couldn’t walk for a month.”

“But everyone gets hurt in Jiu-jitsu,” she adds with a laugh.

Schreiber isn’t afraid of taking on difficult tasks beyond the dojo either. When not teaching Jiu-jitsu to young people, Schreiber grapples with modernizing the RCMP and fixing the problems with what had become a toxic workplace. Vision 150 is a five-year plan established by the Canadian government following revelations of years of sexual abuse, misogyny and racism throughout the force. The RCMP Commissioner’s goal is to transform the Mounties into a professional and inclusive police force that is representative of Canada. Schreiber isn’t allowed to reveal exactly what she works on, but said her team is a core part of Vision 150.

So what’s next for Ottawa’s Wonder Woman? According to Schreiber, she’s focused mainly on fixing the RCMP and caring for her family. Oh, and renovating the dojo, she reminds me.