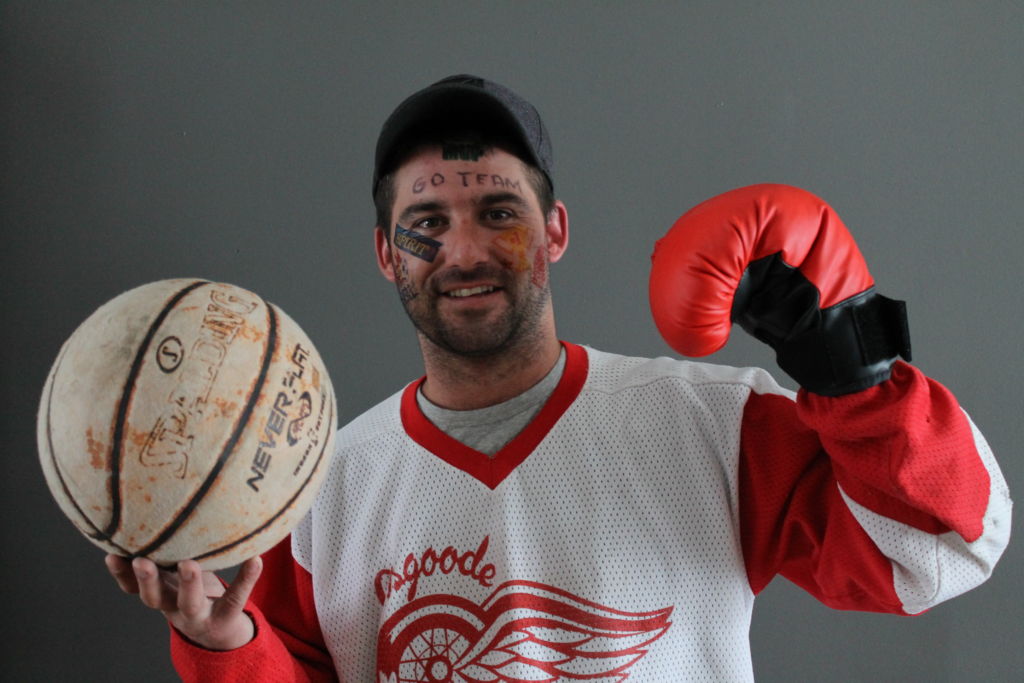 CALLING ALL NON-SPORTS FANS – don’t care much about hockey? Football? Basketball? Glue put together a list of tips to help you pretend you know sports when you actually don’t. Use these in any sporty social situations and they may help you hit a home run in the sports community.

1. Choose a team to cheer for and know their best players.

You will really benefit from doing a little research before jumping into a crowd of fans. Familiarize yourself with a few key players and what they’re known for. Pretending you are a megafan of one player can help people believe you love the game as a whole.

Although Fullerton never took an interest in sports themselves, he sometimes attends games for the experience.

“I recommend just trying to embrace it and have fun,” says Fullerton.

2. Find someone who is cheering for the team you’re pretending to cheer for and react when they do.

You have to make sure you aren’t cheering any time you hear someone cheering. You may end up accidentally supporting both teams, which will not end well for you. Choose someone who is cheering for one of the teams and react when they do.

“Look for where another fans gaze is,” says Bartlow. “You can match what they’re looking at so you look like you know what is going on.”

Bartlow also thinks listening to others and trying to keep up with them can be extremely beneficial.

“Listen and match them to look like you get it,” she says. “If someone yells ‘Oh!’, look at them astonished and say ‘Woah! Did you see that?’,” she says.

3. Make a few odd comments but DO NOT get stuck in an ongoing sports conversation.

As much as you want to pretend like you know what you’re talking about, you want to make sure you don’t put yourself in a situation above your intellectual skill level.

Simon Winkler, a first-year computer programming student at Algonquin, thinks he has figured out what works.

“If you say something open-ended like: ‘can you believe this ref?’ it invites any kind of reply. It infers that you know more about this game than you do,” says Winkler. “It might make people talk to you more, which could draw attention to your ignorance of the sport.”

Getting caught in a conversation meant for sports lovers can become uncomfortable for both parties.

“If they saw you previously acting like you knew what’s going on, the impression that people get is that you’re fake,” he says. “Basically just avoid questions that can lead to follow up questions from other people or else you may be exposed.”

4. Just have a drink and blame it on the buzz.?

If used correctly, a nice pint can help you be more confident in what you do know. You may pick up the odd thing along the way and can test the waters mid-game. If all else fails, blame the alcohol.

Megan Magro, second-year biomedical science student at University of Ottawa, has never enjoyed sports and has always found them hard to follow.

“I don’t see how it’s fun to watch people run around,” says Magro.

She has often found herself having a few drinks to help her pretend to fit in, on the rare occasion that she attends a sports game.

“If you’re really drunk and you say something stupid about the sport to a fan,” she says, “you can just say ‘oh my gosh hahaha I’m just really drunk, I’m not that stupid.’”

You may think a jersey, face paint and a foam finger is the way to go but then attention is drawn to you and your uneducated-ness. Sports gear is a shoe in for friendly sports banter. This should be avoided at all costs. A simple jersey is okay – almost everyone will be in one. Steer clear of the over-the-top attire.

“I pretend to be a fan by borrowing a jersey from whoever is a real fan,” says Sherry Ronan, a first-year esthetician at Algonquin.

“You never want to go too crazy with the gear because you either look crazy because no one else is that dressed up or people may mistake you for a die hard fan and ask you specific questions,” she says. “Your goal is to blend in with what others are wearing.”

6. Know the basics of the game and maybe some sports lingo and stick with that.

Lack of commentary is a definite sign that you have no idea what is going on. Knowing the basics of the game makes people around you think you actually care about the game.

Adia Buckle, a first-year performing arts Algonquin student, has been able to pick up some knowledge from her sports-loving boyfriend.

“There are no goals in basketball and no home runs in hockey. If you don’t know that, you will be fiercely ridiculed,” says Buckle.

Although she often has to have her boyfriend explain things to her, Buckle knows the benefits of trying to learn.

“I know some lingo. Just really basic stuff,” she says. “If you don’t know it, it is a general thing that would make you stand out like a sore thumb.

7. Use emotion as an escape plan – true fans are emotionally invested.

If you really don’t know what’s going on, pretend you’re just really emotionally affected. Throw your hands up and say “I just can’t take it anymore!”.

Emilio Arzamendi, a first-year sociology student at uOttawa understands why people like sports, but never got into them himself.

“People just enjoy the social interaction that arises within the events,” says Arzamendi.

Arzamendi has noticed that escalating your emotions can get you out of any situation. If you pretend to be invested in what a fan is saying, they will continue to tell you more.

“Let true fans do the leg work,” he says. “They basically will talk to themselves if you just throw in the odd agreement. I just serve as a guide.”

Although, if you really don’t want to listen anymore or you run out of things to say in return, you can then become extremely emotional and will get yourself out of it.

Good luck out there, team!