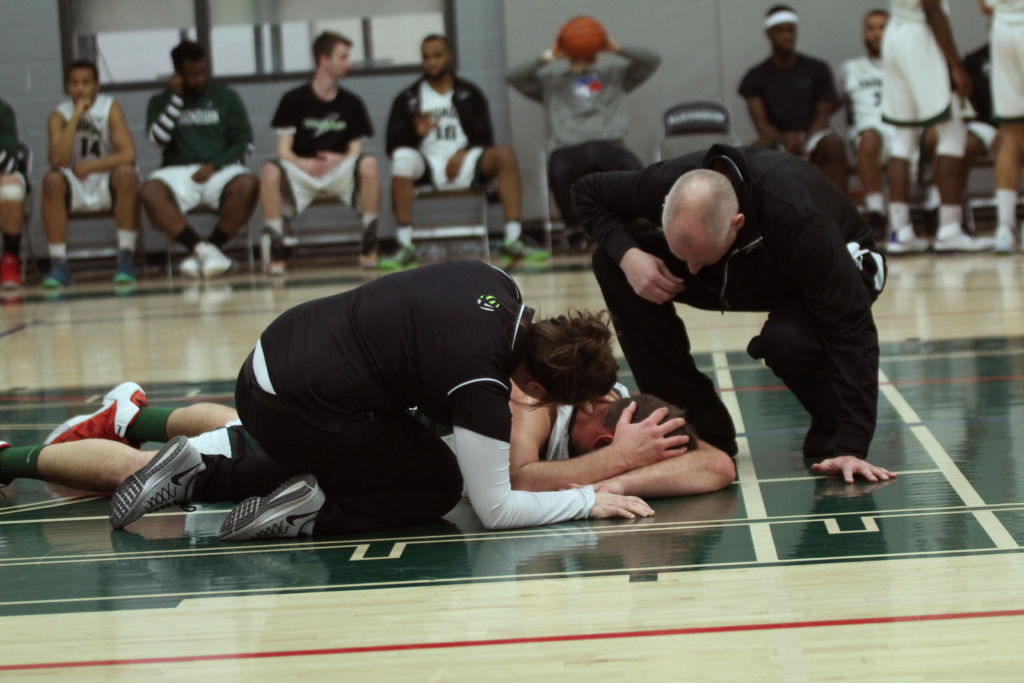 Algonquin Thunder player Dennis Dervisevic gets checked out by the team's trainer and head coach after suffering a hit to the head.
Photo by: J-D Potié

Jesse Topley’s football career came to an end after he suffered a concussion playing for the Queen’s University team in September 2014. He doesn’t remember much of the circumstances surrounding the play, but the effects that it – and previous concussions – had persisted.

Topley is now a part of the Concussion Education Safety and Awareness Program (CESAP) that was founded by Queen’s students Allen Champagne and Chris Griffiths in 2016. Topley initially started a program called Beyond the Headache, teaching young athletes about the symptoms and protocol associated with concussions and telling his personal story.

“I’m 23 years old as opposed to a 50-year-old doctor talking to them and telling them what to do,” says Topley. “I’m better able to connect with these young athletes. We can deal with these things that are hard to talk about and make a connection with those who are in the same position.”

According to statistics from the Canadian Institute for Health Information, the number of emergency room visits for sports-related brain injuries has nearly doubled from 2010 to 2015 in Ontario and Alberta. From 2014-15, a total of 15, 215 reported emergency department visits were due to sports head injuries. Of those visits, 94 per cent were concussion related.

What makes concussions such a difficult injury to deal with?

One of the difficulties of diagnosing and treating concussions is that identifying a number of the symptoms is reliant on self-reports from the athlete.

“Most of the time, athletes won’t report concussion symptoms,” says Anand Balaji, a registered physiotherapist at the Algonquin location of Pro Physio and Sports Medicine Centres. “They want to get back in the game. It’s the responsibility of the coaches, they need to know when (the player) needs to stop.”

Topley has had first-hand experience of this “warrior mentality” in the football sphere.

“You’re supposed to play through the pain,” says Topley. “That’s what makes it tough for concussions and mental health. People can’t see the physical signs and symptoms that you’re hurting, so you’re expected to play through it.”

It’s an issue that numerous groups are now trying to address, through legislation, outreach programs and training. Many of these efforts target young athletes and look to engage the players, coaches, referees and parents. It’s a practical choice. More than 60 per cent of emergency SRBI patients were under the age of 25.

“Professional and college athletes have great access to resources to be taken care of,” says Champagne. “In youth sports, there’s a lot of volunteer coaches and trainers. Educating them, as well as the players, is important.”

The importance of education and awareness

Champagne’s CESAP initiative has reached over 2,000 kids from Brampton and Mississauga to Quebec City. The program offers clinics with educational sessions and on-the-field behaviour modification training that teaches techniques for playing the sport in the safest way possible.

“We bring in national and varsity athletes to teach them how to play safely,” says Champagne. “We design drills specific to brain injuries. The trainers and coaches may not be focusing on this because they don’t have the time to. It’s not ‘Don’t play the sport.’”

Champagne stresses the importance of the role that teammates, coaches and parents play in the safety of young athletes. When a head injury occurs, it’s crucial that someone stands up and makes sure that the player is taken out of the game and checked out by a medical professional.

“The coaches and parents, they know the players and can keep an eye out for abnormal behaviour,” says Champagne. “It’s important to put your hand up if something doesn’t seem right. Don’t be silent about having doubts.”

Symptoms of concussions can vary greatly depending on the individual and the severity of the injury. Coaches, trainers, parents and officials must be able to recognize warning signs on the field and in the weeks following the injury.

“When someone comes in with a concussion, the first thing we need to know is if they’ve had a concussion and treatment before, do they know what they’re dealing with,” says Balaji. “With youth athletes, we’re teaching them what they can’t do and dealing with the parents about necessary supervisions. We make sure they’re watching for the bad symptoms. In he first two to three weeks, there’s lots of monitoring.”

He added that some symptoms, such as cognitive and thinking difficulties, can be more long-lasting.

“When I was reading, it was like I had to first read each individual word and then had to piece all those words together, reading it over and over until I understood it,” says Topley. “Just reading it meant I wouldn’t absorb any of the information. Going into tests, even if I studied it was like I wasn’t studying. That didn’t encourage me to study. I could see how much easier it was to read and how much more clearly it was to think once I took charge (of recovery).”

Each concussion is different, and there is no set timeline for a full recovery. For athletes, it’s crucial to follow concussion protocol in their return to the sport. It’s a multi-step process.  The patient moves on to the next stage once they have remained symptom free in the previous one.

“It’s about making sure they’re symptom free and back to the way they were before the injury,” says Balaji. “There’s muscular scans, we check their strength and co-ordination and simulate the sport – first with no contact and then on the field with no contact before they can return to full contact participation.”

“These issues might not arise for everyone,” says Topley about his own difficulties. “If you take the proper return to play and return to learn protocols, you can go on and have a safe career.” 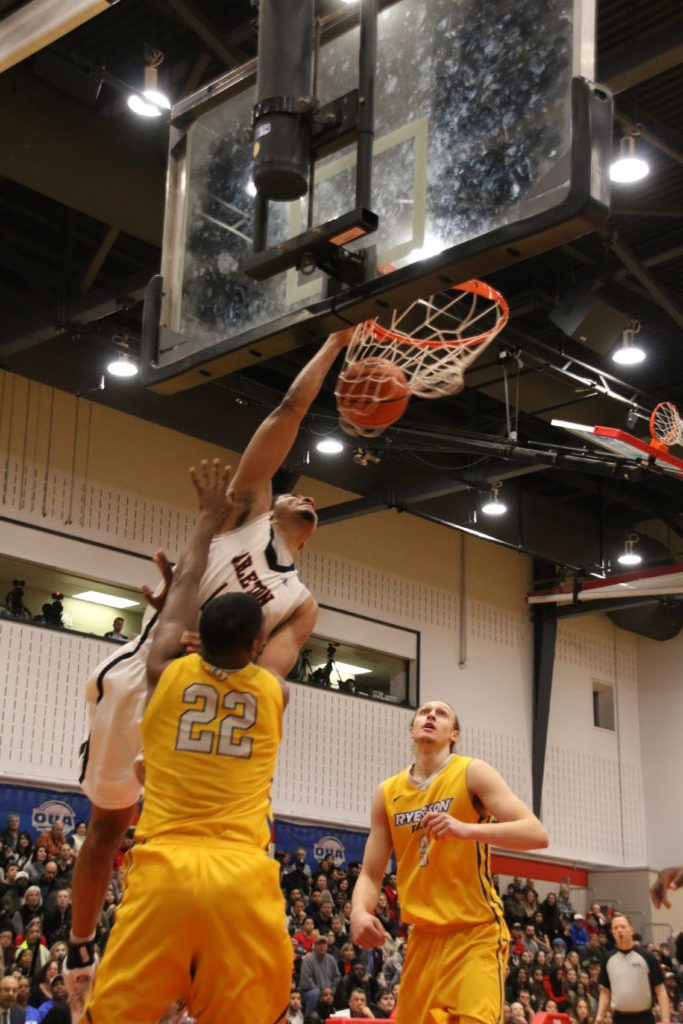 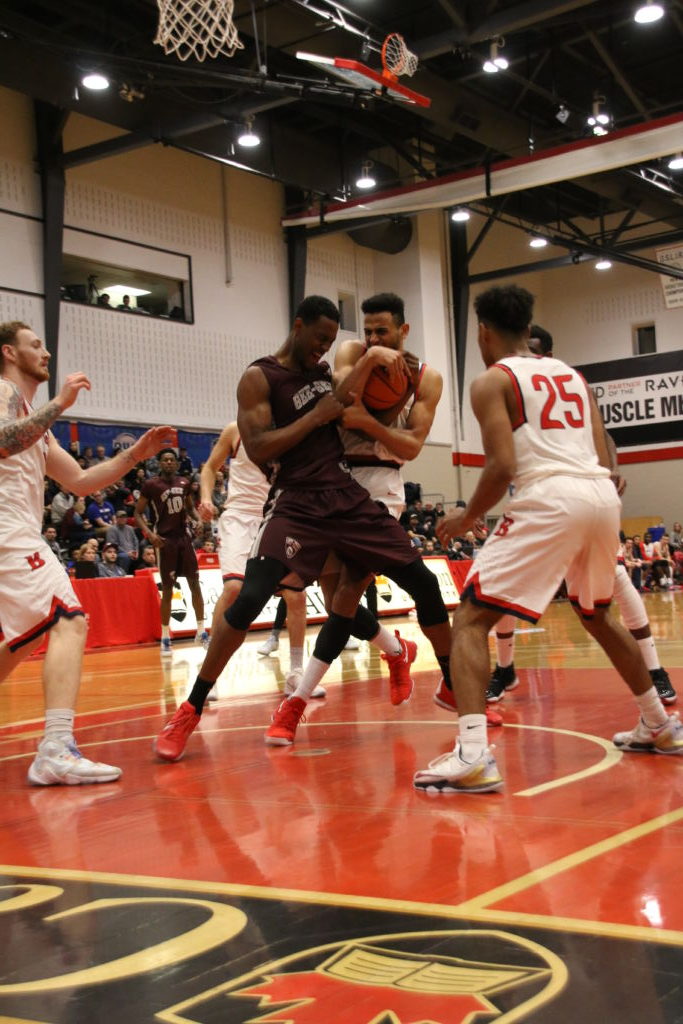 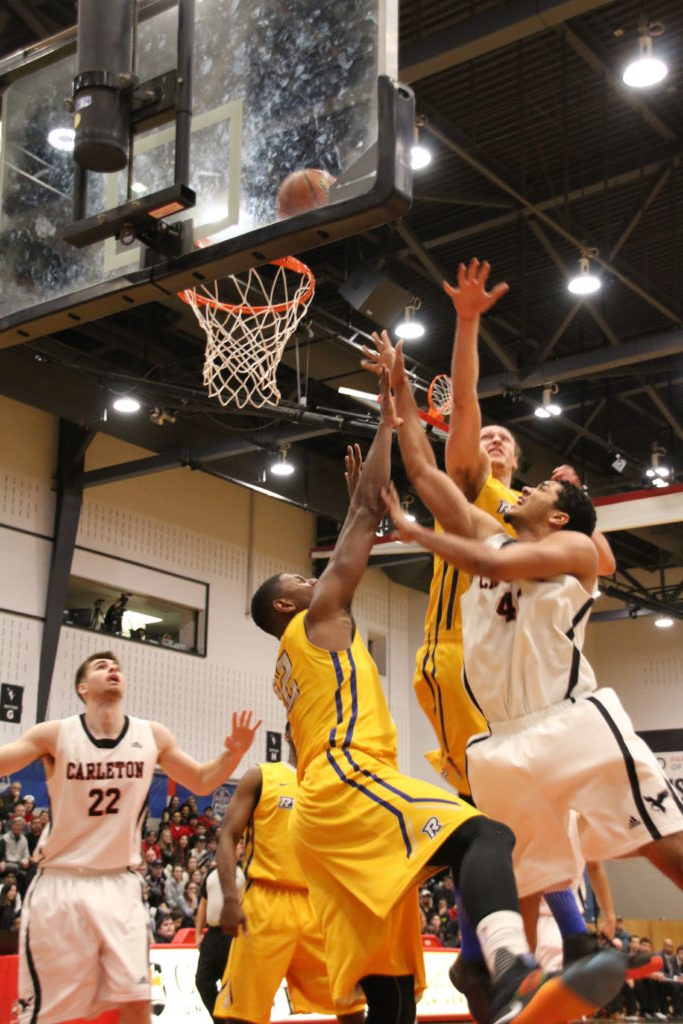 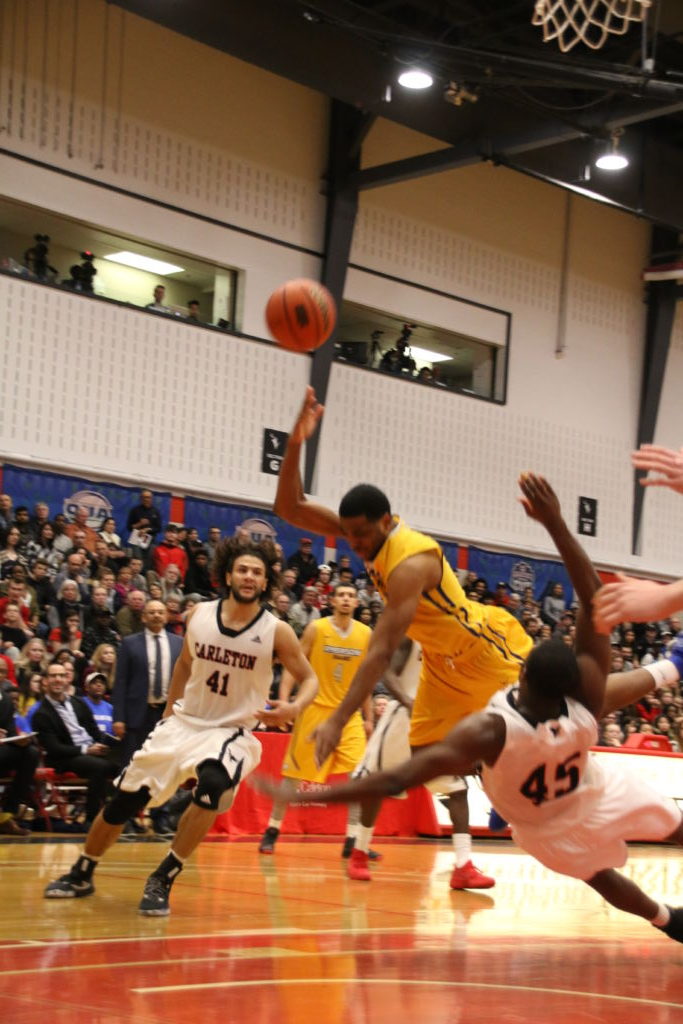 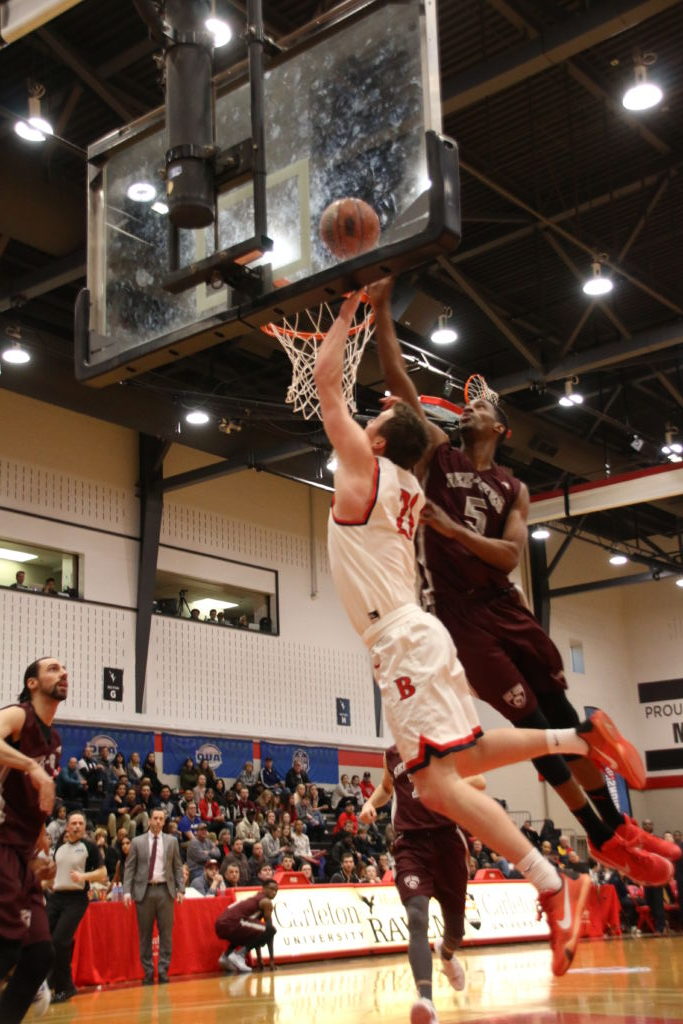 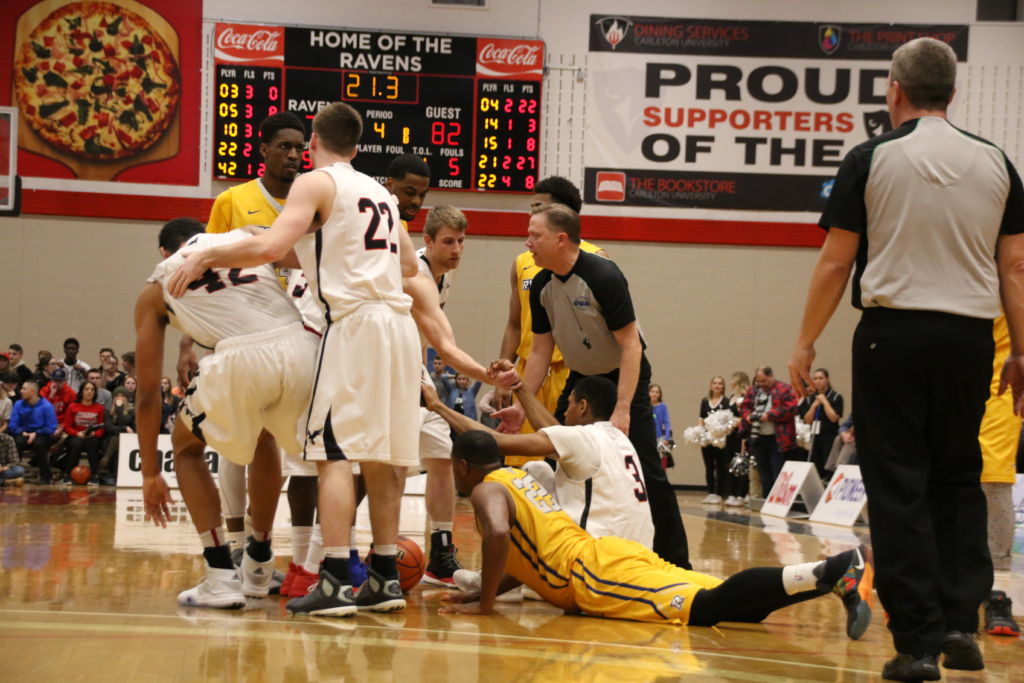 Elite-level athletes put their bodies on the line regularly during competition. When they’re in do-or-die situations, like the OUA Final Four tournament held at Carleton, the intensity is even higher. Above, the University of Ottawa Gee-Gees and Brock Badgers battle for bronze, while the Ryerson Rams and Carleton Ravens compete for the title. [Photos by Sarah Ferguson]