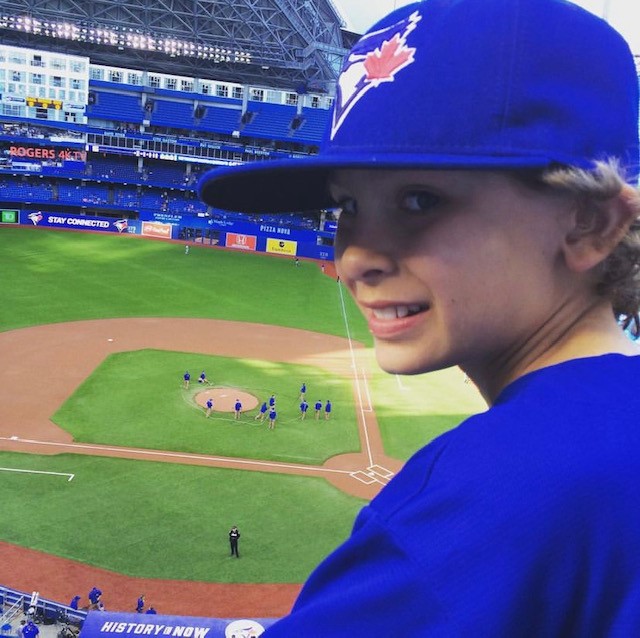 Writer Liam Fox at age 12 in 2016, fitted head to toe in blue at the Rogers Centre watching his beloved Blue Jays.
Photo by: Liam Fox

I was eight years old the first time my parents took me to a Blue Jays game at Toronto’s Rogers Centre. I remember it vividly: the sea of blue surrounding the striking green field, the air filled with the smell of popcorn and hotdogs, thousands of people draped in blue chanting ‘”Let’s go, Blue Jays!,” and the bass booming out of the scoreboard speakers at centre field. The sun hit the field after the dome was opened and when you looked up you could see the CN Tower. I remember hearing a pop off of the bat. knowing the ball was sailing into the seats and getting up to high-five the people around me while the home run horn blasted around the stadium.

That’s when I fell in love with baseball. The atmosphere made me feel alive. I still get that feeling now when I see current players like Vladimir Guerrero Jr. launching homers or Alek Manoah punching tickets while I’m sitting in the same section of Rogers Centre as I did when I was a kid.

Now that I am 18 years old and in college, sports act as a catalyst for nostalgia. Most people can relate to this. Maybe it’s music, a type of food, or a certain place that brings back memories, but sports, both playing and watching them, stand out for me.

I grew up playing baseball, soccer and tennis, among other sports. I never missed a Blue Jays game unless I absolutely had to. When I had no baseball to watch in the winter, I shifted my attention to the Toronto Raptors and Pittsburgh Penguins (not the Toronto Maple Leafs, because the Jays had already put me through enough postseason failures, and Sidney Crosby was too good not to root for).

My family also bonded over sports. My parents and brother were at almost all of my games, regardless of where the game was or what sport, and we spent a lot of time together watching the Jays and Raptors.

My daily routine growing up revolved around sports. I would wake up early so I could watch Sportsnet’s recap of all the sports, go to school, in which my favourite class was phys-ed, and every recess my friends and I would play a combination of soccer, basketball, mini-stick, shoe baseball – a game we created – or whatever other game we chose to play. I would then go to practise for whichever sport I was playing at the time and immediately watch sports with my family when I got home.

Nothing will beat the feeling of running barefoot down my street with my brother when Jose Bautista launched a three-run homer and threw his bat over his shoulder in celebration in the bottom of the seventh inning to give the Jays the lead in Game 5 of the American League Division Series, marking the infamous bat flip. Or sprinting onto the field and dogpiling with your team after winning a tournament.

Sports taught me valuable life lessons at a young age about respect, teamwork, gaining confidence and handling success, failure, and rejection. I made meaningful friendships through a shared love of sports and being part of a team.

I relive those memories whenever I get back to doing what I loved as a kid: sports.