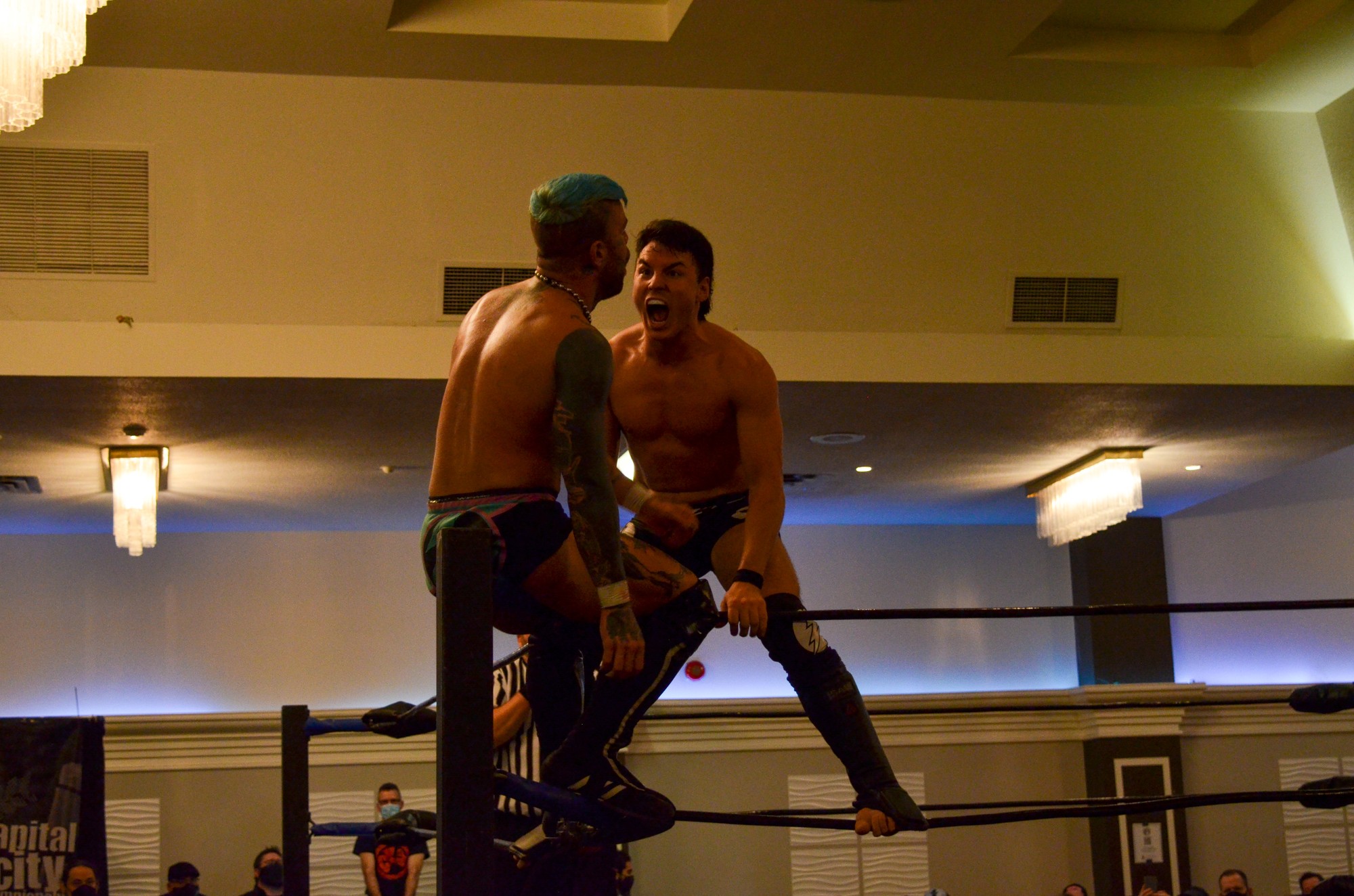 "Speedball" Mike Bailey screams in the face of Kevin Blackwood as he looks to take advantage during their "Never Say Never Again," match on Nov.12.
Photo by: Tanner Reil

Cheers and applause filled the air of St. Anthony’s Banquet Hall in Ottawa’s Little Italy, the evening of Nov. 12. The sold-out crowd of wrestling fans watching Capital City Championship Combat (C*4)’s “Never Say Never Again” gave a standing ovation to “Speedball” Mike Bailey, who had just defeated Kevin Blackwood. The two had wrestled a fast and hard-hitting winner-takes-all match, for Bailey’s C*4 and Blackwood’s C*4 Underground Championship titles. Bailey bowed to the fans, holding his new titles as his theme song, Brass Monkey by the Beastie Boys could barely be heard over the fans’ reaction.

Hanging from the venue’s upper balcony was a large black and white C*4 banner. Competitors who had wrestled earlier in the evening looked on, as did lifelong wrestling fan and C*4 founder Mark Pollesel, who leaned over the railing, wearing a black The Monster Squad baseball cap and blue-plaid collar shirt.

Starting his own independent wrestling promotion was not always Pollesel’s goal. After graduating from Algonquin College’s scriptwriting program in 2004, he became involved in the local wrestling scene, wanting to contribute in any way he could. Pollesel later realized he’d rather be putting his energy into something more worthwhile of his time, and began C*4 in 2007.

“I realized as I was doing it that I was really trying to create something that didn’t exist when I was at my biggest point in my own fandom as a kid in Ottawa, and that was create a solid independent wrestling promotion,” says Pollesel. “Perhaps subconsciously it was always a goal, but not something I think I had in mind or was aware of when I got involved in the indie scene at first.” 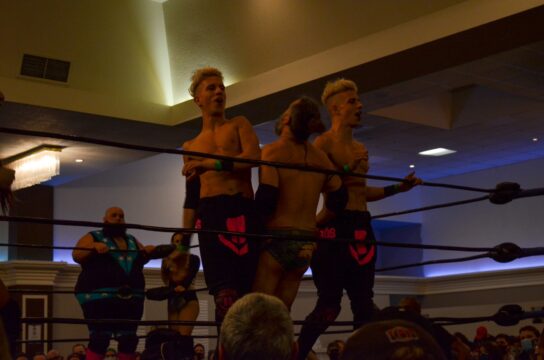 Pollesel still writes to this day and has his first independent feature film currently in production, wrapping up after a two-year shoot. As he pursues his passion for storytelling, he still uses many of the skills he learned during his time at Algonquin.

“It taught me the fundamental building blocks to holding an audience’s attention,” says Pollesel. “I learned how to structure things for a big-picture conclusion. I feel many things I was taught both directly and indirectly impacted me. I feel like I also learned about rewarding an audience and making sure everything had its purpose.”

Pollesel and C*4 have been able to raise over $450,000 for the Canadian Cancer Society over the past ten years. This began when Phrank Morin, a 23-year-old member of the local wrestling community, was diagnosed with cancer.

“When he was first given his terminal diagnosis in January 2011, myself and others discussed putting on a wrestling show to honour him,” says Pollesel. “At the time, the hope was we would put something on for him to see and experience in person – to see how he’d touched so many people’s lives locally. However, his cancer spread rapidly, and his timeline moved much faster than anybody anticipated.”

Morin tragically passed away from the disease in April 2011, before the event could take place. With the blessing of Morin’s family, the show dubbed “Fighting Back: Wrestling with Cancer” would go on in his memory in August, and raise $10,000 for the Canadian Cancer Society.

“Fighting Back will always be for Phrank,” says Pollesel. “However, as the years go by, unfortunately, it has become something that also extends to other loved ones dealing with the horrific disease.”

“Fighting Back X” also marked another occasion for C*4, as it was their first event in 18 months, following an absence due to the COVID-19 pandemic. While larger promotions like World Wrestling Entertainment (WWE) and All Elite Wrestling (AEW) continued to run live broadcasts without fans, C*4 was forced to take a pause. 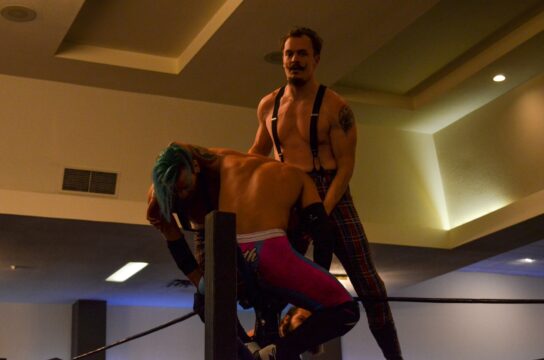 Pollesel was nervous about returning to live events in September but was grateful to be able to do so. His nerves were truly put to rest when Fighting Back X sold out in only two minutes. C*4 has made the safety of their roster, staff and fans a priority since returning, following a strict COVID protocol.

“I hope that coming out of the pandemic, quality independent promotions are able to run across the country in different markets, and all succeed,” says Pollesel. “Before the pandemic, it wasn’t uncommon for shows in every major city on nearly every weekend of the year, would have packed venues and rabid fans. I really hope that can return.”

Although the country has produced some of the greatest wrestlers of all time, including Bret Hart, Edge, Chris Jericho, Roddy Piper and Trish Stratus, the Canadian independent scene is often overlooked, especially in comparison to that of the U.S. and Europe. Pollesel hopes that Ottawa fans continue to come out to C*4, and that other Canadian promotions continue to grow.

“The Canadian indie scene is something special,” says Pollesel. “It is hard to get the proper attention to all the hardworking guys and girls up here at times, mainly due to the fact it’s a huge country, and major cities are, for the most part, separated by large distances. My hope is that in the months to come, we will see more promotions getting onto services like IWTV and elsewhere, to help get eyeballs onto their products and the hardworking talents.”

The C*4 and C*4 Underground Champion Bailey might just be the next Canadian independent wrestler to make it in one of the industry’s top promotions, inking a contract with the Nashville-based Impact Wrestling.

After suffering a defeat to current Impact and former C*4 Wrestling star “The Walking Weapon” Josh Alexander at a Destiny Wrestling event in Toronto, Bailey was approached by the executive vice president of Impact Wrestling, Scott D’Amore, who offered Bailey the deal: “Put your name on this line, get in the U.S., and show them why Canada makes the goddamn best professional wrestlers in the world.” 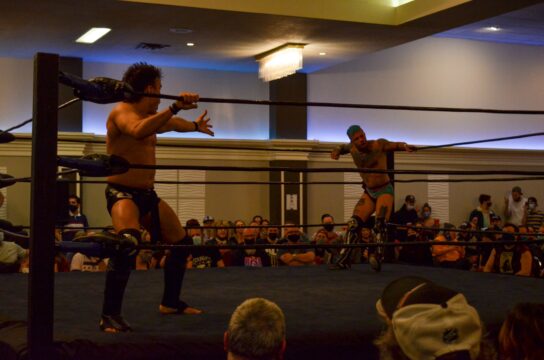 Due to a 2016 visa issue with Combat Zone Wrestling (CZW), the independent wrestling star was unable to enter the U.S. for five years. Now Bailey will have the chance to prove himself on a bigger stage. Following the signing, Baily thanked his 16,000-plus Twitter followers: “Thank you. Despite setbacks and hardships I’ve had in my wrestling career, I only feel blessed & grateful for the love & support that I have received continuously in return for my hard work. I couldn’t do any of it without you all. Thank you. I’ll keep doing my best!”

However, Bailey and Alexander are far from the first C*4 stars to make it to an international level and compete for promotions such as WWE, AEW and Impact Wrestling.

The Ottawa-based independent promotion has seen many of the industry’s top stars step through their ropes and dazzle fans, including WWE’s Kevin Owens, Sami Zayn and Cesaro.

AEW’s Evil Uno and Stu Grayson of the Dark Order faction were able to return to the most recent C*4 event, dubbed “Better Watch Out,” which took place on Dec. 10 at the Algonquin Commons Theatre and aired on Independent Wrestling Television (IWTV). The show was headlined by Bailey successfully defending both of his C*4 Championships against Kobe Durst.

Fans of C*4 can look forward to their return to St. Anthony’s Banquet Hall on Jan. 21, 2022 for “Fantastic Voyage,” which will feature Alex Zayne, one of independent wresting’s biggest stars.

Pollesel says to expect an experience at C*4 that you’ll not find anywhere else in Ottawa. “On a promotional level, C*4 is a good time. I have said for years; There are two types of people in Ottawa, C*4 fans, and those who haven’t been yet. C*4 is in my humble opinion, bell to bell, the best independent wrestling promotion in Canada. We offer a unique mix of talent and a roster that is second to none. We offer a show that is unlike anything else in the country. As such, on a personal level, C*4 is an accomplishment I am tremendously proud of. We have built something incredibly special up. It’s a creative outlet in my life that exists in a way that nothing else does. It is a medium that provides immediate audience response to ideas and thoughts that I am putting out into the world. And, just as quickly, it’s over and on to the next one.”