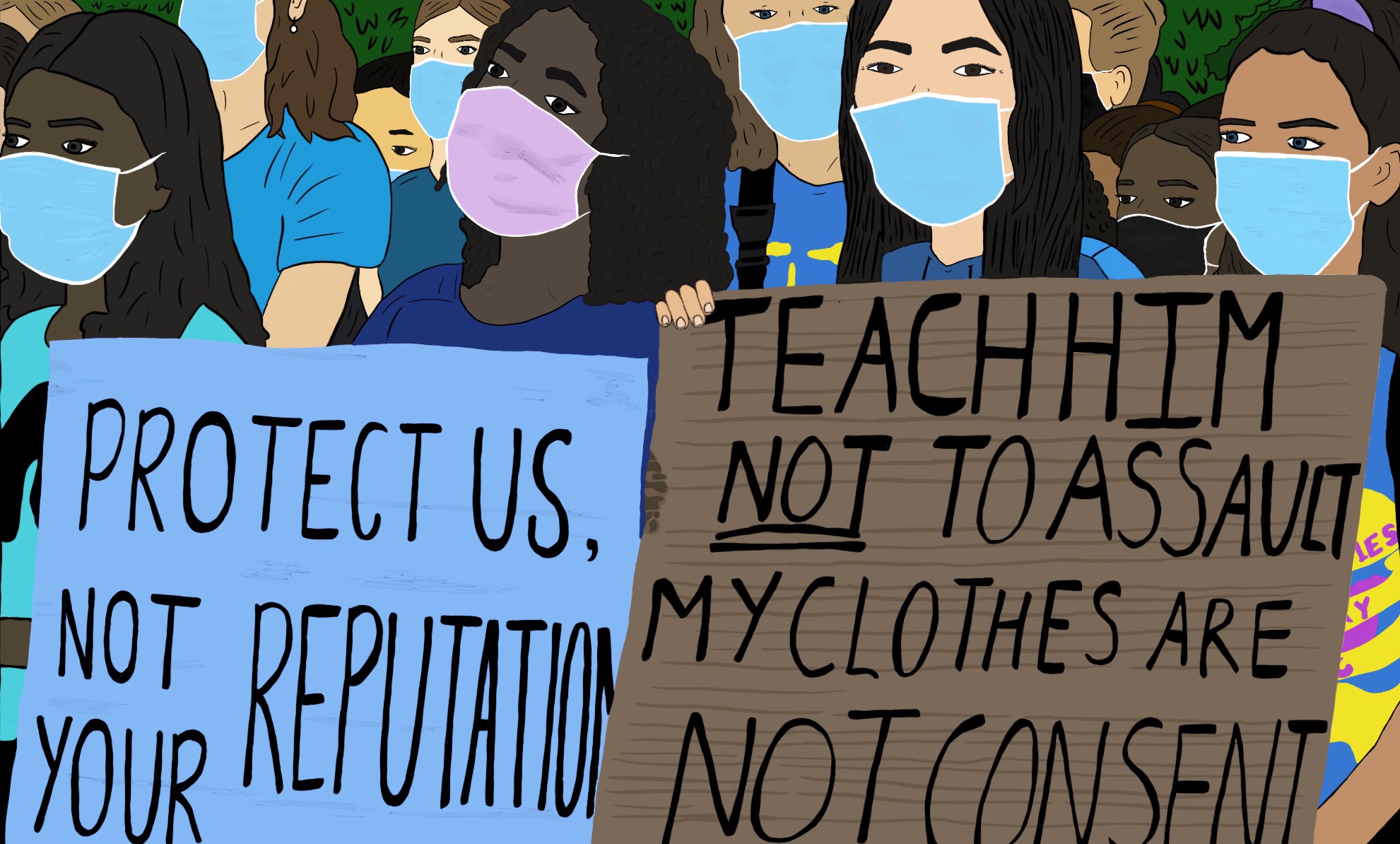 A digital illustration of the 2021 walkout at Western University.
Photo by: Tamara Condie

On Sept. 13, 2021, news broke that there had been an alleged attack on 30 women at Western University, surfacing a stomach-churning horror that university students across the country live in fear of.

Sitting at her home office while being bombarded with messages, Sarah Crawford, the sexual violence and harm reduction coordinator at Algonquin College, scrolled through her social media to digest the unnerving news when a Reddit post caught her eye.

“One of the most shocking things I’d seen was this clip from Reddit the following weekend telling girls not to go to the bar because they would be doing it again,” says Crawford. “As if there was no remorse for the previous weekend and they were almost proud.”

What is rape culture?

As women, we are prepared for these situations like soldiers for war.

Standing in a line at my elementary school, all the girls would put our arms down, extend our fingertips on our thighs, while being told our shorts must reach past our longest finger to be deemed appropriate.

We would place three fingers on the straps of shirts resting on our shoulders to make sure they wouldn’t be a distraction to the boys and men around us.

We were taught that if a boy was picking on us at recess it simply meant he had a crush on us and that “boys will be boys.”

We were told not to walk down alleys or be out past dark alone, to lock our cars as soon as we get in it. Told to always use a buddy system and never leave your drink unattended at a party.

If you wear something like that then you’re asking for it. Hold your drink close by, don’t take your eyes off it. Don’t park in underground parking if you’re alone. Don’t enter an elevator if already occupied by a man.

As we grow older, these warnings become lethal threats to our safety. As women, we have an ever-present fear of being attacked.

These warnings put the burden on women to constantly live in fear. It’s a dystopian narrative that perpetuates the idea that if something were to happen to us, it would be our fault for wearing the wrong thing, being in the wrong place at the wrong time, for not using a buddy system or being unaware of our surroundings.

As Hillary Kelly writes beautifully in New York Magazine: “We hold our keys between our fingers on dark streets and wonder if we’ll have to use them to wield off attackers. We keep our drinks pressed tight to our bodies at parties and bars and fake phone calls to keep strange men at bay. We text friends from bus stops and after we’ve locked our front doors. We turn on location-sharing lest a date turns ugly or violent… We do a goddamn ton of the work to keep men from touching us in the ways we don’t want to be touched. Frankly, it’s exhausting.”

Sexual assault is the most reported crime on campuses across Canada — one in five women will experience some form of sexual assault while in college or university, and the first six to eight weeks of school are often referred to as the “red zone,” the period when female students are most likely to be sexually assaulted.

“Sexual assault rates are the highest for the first six to eight weeks, so for the month of September it’s really important I do a lot of events trying to engage students in these conversations about consent and healthy relationships,” says Crawford.

Typically, campus orientation activities take place in early September. According to the Western University website, their school is known for setting the Orientation Week [O-Week] standard across Canada, and every year, they plan to raise that bar even higher, offering students exclusive experiences, campus-wide events and everything students should need to make their school year a success.

“It’s a seven-day welcome to a new school, new friends, and a new life. Near or far, virtual or in-person, our O-Week will be accessible to all students via the O-Pass [Orientation Pass, a ticket to all O-Week events]. Don’t miss out on once-in-a-lifetime memories made possible by Canada’s best Orientation,” according to Western Universities O-Week information page.

According to social media posts, 30 or more students may have been drugged and/or assaulted in Medway-Sydenham Hall, a student residence building, during O-Week.

What they don’t include on their information page is that this week creates likely odds for women to be taken advantage of, drugged, and assaulted. They fail to mention that “Canada’s best Orientation” would create some of the worst memories students could imagine.

“What we know now is that there were a number of concerns raised on social media about events that had happened during ‘O-Week’ on campus,” says Katreena Scott, academic director for the Centre for Research and Education on violence against women and children, and professor of psychology at Western University.

“There were some serious allegations around sexual assault, however, there have been no formal reports,” says Scott. The London police are currently at a standstill with an open investigation into the issue but no formal reports.

These assaults were no fluke. They were a likely product of party culture and lack of education on sexual conduct and misconduct.

The privileged male narrative of “doing no wrong” was exemplified in the way that the university handled this situation. The events were part of a notable pattern that the university administration should have taken seriously and put an end to years ago.

No one was “asking for it” by wearing too revealing clothes, their bodies too beautiful to resist. Thirty women of every race, religion, shape, size and attire reported being attacked.

How can large institutions promise to protect us and then allow this to happen? They said we would be safe, they said university would be the best years of our lives and they promised to protect us.

Gender-based violence and sexual assaults are referred to by students at Western as an epidemic plaguing the university.

How can we as women feel safe with assaulters living next door, walking down the hallways or sitting in class next to us?

Society prefers to blame women and the clothes they were wearing for the actions men take instead of blaming the perpetrators: men.

“We’ve seen what happens when we do call out men, especially on social media platforms. Suddenly we’re angry, crazy nags. We’re ugly, undesirable feminists. We deserve to be raped, harassed, killed. All for asking men to do better,” says Eternity Martis in her best-selling book They Said This Would Be Fun.

Rape culture is a term coined in the U.S. in the 1970s, meaning, at its core, the way that society blames women for sexual assault while normalizing sexual violence. Shifting the responsibility, once again, to women.

Why must women always be held responsible for making sure they aren’t raped? Why not instead, teach men not to rape?

“There is no larger hub of rape culture than university and college campuses,” says Martis.

In 2014, 41 per cent of all sexual assaults in Canada were reported by students, and 90 per cent of those victims were women. In 2017, following the #MeToo movement, police-reported sexual assault — including on school grounds — hit the highest number since 1998.

Statistics, according to Students 4 Social Change, show that men who partake in fraternities are three times more likely to commit rape than those who don’t, and women in sororities are at a significantly higher risk to be a victim of rape than other female students.

On Oct. 1, 2019, the University of British Columbia (UBC) shut down its fraternities, and the RCMP began an investigation after six women said they had been drugged at a frat party on the campus.

In 2013, hundreds of students were seen shouting an annual frosh chant at Saint Mary’s university in Halifax: “SMU boys, we like them Y.O.U.N.G., Y is for your sister, O is for oh so tight, U is for underage, N is for no consent, G is for grab that ass.”

That same year, 2013, first-year students at UBC were reportedly encouraged by their “student leaders” to sing a similar chant.

In September of 2016, students at Université du Québec took part in a game that awarded points for completing a list of derogatory sexual challenges, including such tasks as taking a photo of a woman’s breasts, or a photo of themselves kissing a woman.

In October of 2019 at Western’s annual fake homecoming [FOCO], banners promoting rape culture were seen hanging just outside of off-campus housing at the university that read: “Queens Girls Spit, Western Girls Swallow,” “If Your Girl Goes to Western, She’s Not Your Girl Anymore,” and “Our Roommate Is A Virgin Pls Help.”

These signs, revealing the dark reality of party culture at Western, were acknowledged by university president Alan Shepard, in a public statement in which he admitted they demonstrated a lack of respect for women.

These words on paper carry no authenticity. Nothing has changed and nothing will change until we put the onus of education and respect for women on men.

Undermining these signs is the same sentiment as “boys will be boys” an excuse that fuels rape culture, justifying the “unintentional’ actions” of boys and protecting them at all costs.

It is ignoring the bigger picture, normalizing sexism and rape culture in universities and encouraging gender-based violence.

Evidently, this is an ongoing theme for many colleges and universities across Canada.

Algonquin College President Claude Brulé says that the school is actively training staff to deal with these situations. “We have put programs and modules in place to train all of our employees in recognition of these incidents and helping to deal with the student population on making sure we help students make the right decisions,” says Brulé.

We don’t want added safety measures, we want men to stop hurting us, stop sexualizing us and stop blaming us for the things they do to our bodies without given consent.

Protests and walk-outs flooded Western’s campus following the allegations as the demand for a culture shift grew. The university now requires all 5,300 students living in residence to take a mandatory two-part—online and in-person—training module about sexual violence, dealing with rejection and consent. “This mandatory in-depth training should exist in all universities on all campuses, it is really important,” says Scott. “But is also important to have the conversation that we need a culture change. We need to see a meaningful change on and off our campuses so that people are safe. We need to really move the dial, to change the rates of gender-based and sexual violence in society,” Scott adds.

Over 9,000 students and faculty were seen standing in solidarity with the victims, carrying signs that read: Protect your students; Teach HIM not to assault; My clothes are not consent; I shouldn’t be scared to walk alone at night; How many more…??

When an entire generation of young women has been in this situation or knows someone who has, that is rape culture.

“We teach children that there is a world that lurks in the darkness under their beds at night — the gap between humanity and unspeakable horrors. We tell them it isn’t real. But it exists. We live it every day,” writes Martis. “When did we start guilting women into being flattered by the unsolicited catcalls, the violence-tinged remarks about our bodies and what they’d do to us if they got us alone, the grimy sweaty hands that grab and claw at our waists even as our bodies and voices say no?”

Rape culture isn’t a myth, it’s real, and it surrounds and suffocates us daily.

Who promised men they were entitled to my body? Can I have it back?

To the women to have reported these claims: I hear you, I see you, and I stand by you.

To university and college administrations: Protect us, not the reputation of the men hurting us.