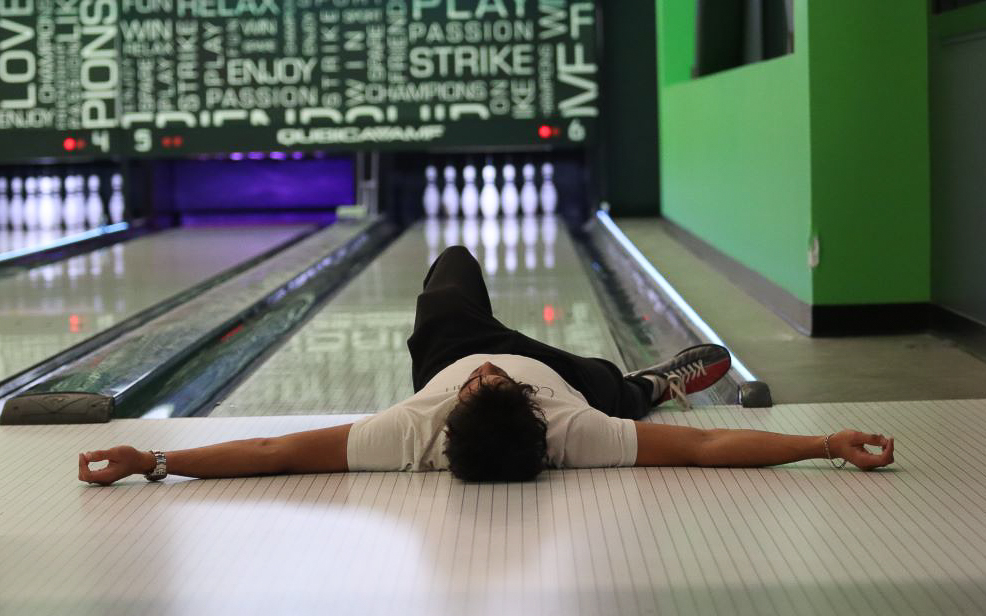 The art of the nine-pin strike. An oxymoron if ever there was one. Liam turns and bitterly complains, “That should’ve been a strike.” Aadil turns in disbelief because, for once, lady luck has abandoned him. And I, well, I end up on the floor.

Lane six has become our little haven. For an unhealthy amount of time per week we celebrate each other’s failures, simply because one of us throws a heavy round object better than the others. We whinge and gripe, laugh sarcastically, stare in disbelief and probably concern everyone else in the alley.

First, we were bad and competitive. Then we got good and more competitive. Now, at our best, we’re very good and uber-competitive. But the competition has shifted slightly. Yes, coming last is still a problem, but now bowling under 100 is a complete and utter disaster.

Getting better has also brought its ups and downs.

Liam is a streaky bowler. On a good day he is excellent and the pins go flying. However, when he’s off, things can get ugly quickly. Aadil is consistent and ridiculously lucky. He’s constantly getting strikes from balls that don’t deserve them. But he’s also not clutch. I suppose it’s, as Thanos said, “Perfectly balanced, as all things should be.” I have a routine before every ball, and when everything works I’m half decent. When it doesn’t, I can be melodramatic.

Originally the scoring system was simple. A strike was 30 points. A spare was 10 points added to whatever value you got in your first attempt and anything else was your two attempts combined. Then it was changed to a more complex system, one I know but don’t think I can explain. Since it was changed, the highest individual scores in our class are Aadil and Cameron with 150, Liam with 159 and me with 204. We’ve never seen anyone else hit 125 while we were in the alley.

So what exactly will I miss? The feeling of being mechanically perfect? The sound of pins crashing? The adrenaline that follows a strike or difficult spare? The crushing disappointment of a miss? The shit talking? Yes. To all of it, yes.

But more than that, I will miss the time spent with people I have come to love in an atmosphere I have come to love. People I now cheer for when they are bowling well regardless of my own performance. The unbiased (not) Wolves covering, lane-six bowling journalism students.

Challenge us if you dare; we will happily oblige.