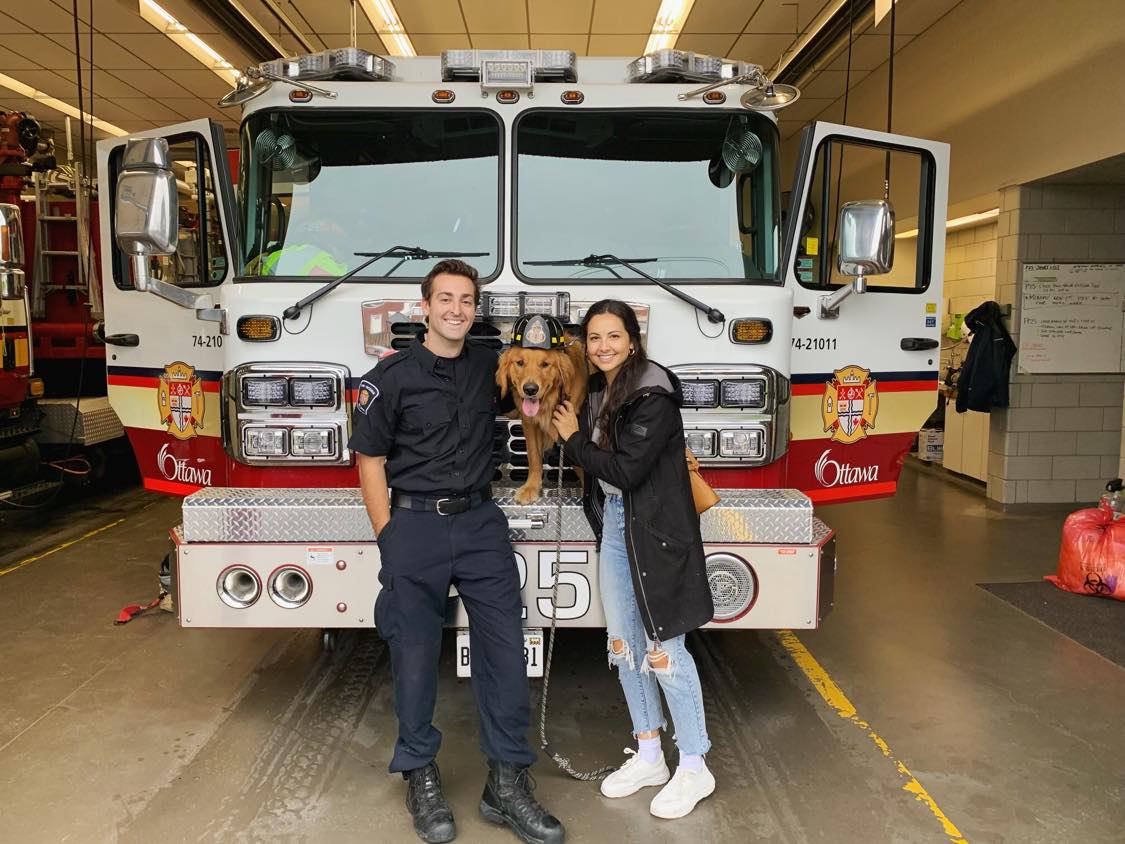 Kody Kelleher at Ottawa Fire Station 25 with his fiancé, Stephanie, and his dog, Doug.
Photo by: Magan Carty

Once the first alarm sounds, Kody Kelleher, 28, and his firefighting crew have 60 seconds to be fully geared and ready to go in the bay. The young firefighter’s heart rate jumps from 40 to 120 beats per minute as the alert tones go off in the middle of the night and he prepares to carry 120 pounds of gear and lose up to two kilos of sweat.

When a building is engulfed in flames and every human instinct screams to get away from the smoke, a firefighter must go against what their body is telling them and run towards danger. Kelleher, an Algonquin College graduate and resident of Carp, Ont., knows what it feels like to risk his own life in order to save someone else’s.

“You have to be on your game at all times,” he said. “You do get to relax a bit, but as soon as the tones go off, everyone changes their mentality and just gets to work.”

When Kelleher wakes up at 5 a.m. and gets to the station for his 24-hour shift, he knows he could be going to the toughest call of his life at any second. Firefighters never knows what to expect. They feel fear but have no time to think about it. Stronger than fear is adrenaline, which Kelleher says fuels him.

“If you ask any firefighter if they love what they do, they’re going to say, ‘It’s the best job in the world,’ and I agree with them,” he says.

Growing up, Kelleher was inspired by his uncle, who served as a firefighter for 25 years. Seeing the fire trucks and firehalls up close as a child, he was motivated to join Ottawa Fire Services (OFS) as an adult and “protect the nation’s capital with pride.”

Volunteer firefighting out of Station 41 on Eagleson Road in Kanata gave him a sense of purpose and fulfilled him in ways his job at a fibre-optic engineering firm did not. He knew then and there that he wanted to make firefighting his full-time career.

The recruitment process was extremely competitive, with over 2,000 applicants vying for 100 positions, according to Deputy Chief Dave Matsche, director of training and safety at OFS. Matsche emphasizes the fact that firefighting is an extremely physical job that not everyone can handle. Kelleher had to pass multiple written tests, interviews and a series of physical, medical and psychological evaluations.

“It was a lengthy process. I was very fortunate to get accepted on my first application and the process still took me about three years,” says Kelleher, who is nearing completion of his probationary period as a rookie.

He is learning how to be a firefighter by doing, alongside senior firefighters who provide mentorship and monitor his progress. He will move up in the ranks and be given a permanent position after working as a rookie out of five different fire stations and districts.

“You learn little tips and tricks as you go,” he says. “It’s a chance to refine your skills and improve.”

While Kelleher may still be a rookie, he is working hard to develop a “very tough and diligent work ethic.” He’s already experienced intense days on the job while pushing his body to the limit and gathering stories he will never forget. The call he and his crew at Station 25 got on Thursday, Jan. 13, 2022, is likely to remain one of the biggest of his career.

“It was the Merivale explosion, and I was working on at Knoxdale that day, so we were the first pump to arrive on scene,” he says.

The deadly explosion at Eastway Tank and Pump Ltd. is considered the worst industrial accident since 1966, according to the Ottawa District Labour Council. It left six employees dead and many more injured. Two Algonquin College alumni were killed.

Kelleher was on the scene that day for over 10 hours. People were still coming out of the building when he and his crew got there.

“There were so many hazards around and explosive tanks that could have made things way worse in an instant. It was a fatal fire, but fortunately we didn’t lose any firefighters and there weren’t any secondary major explosions,” he said.

“I’d say that was a once-in-a-career type of call. It’s crazy that it happened in my first year. I might not get something that big again for another 10 or 15 years.”

His fiancé, Stephanie, says she will never forget the day of the explosion. She was working that day at the Department of National Defense, but Kelleher’s mother called her because it was on the news.

“It happened around noon in his district, so I knew he was there,” she says, recalling the anxiety she felt hearing the news. “Fire is one thing, but the fact that this was an explosion made it so much scarier.”

She couldn’t stop checking updates on Twitter or running through every possible scenario in her mind until finally hearing from him at 8 p.m.

“I felt so stressed – almost numb – but kept telling myself the senior guys would be looking out for him,” she says.

The constant stress of the firefighting job has an emotional toll on them and their loved ones. Sometimes it is not easy to handle. Firefighters are among those first responders who commonly suffer from PTSD.

Kelleher monitors his mental health closely. He knows support systems are available for firefighters, police officers and paramedics through the Ottawa First Responders Foundation and is not afraid to seek help, should the need arise.

Not all of Kelleher’s stories are dangerous, frightening or fiery though; sometimes they are funny.

“One time, we got called for a rescue for an entrapment and it came in as ‘a person with their arm stuck in a garbage chute.’ When we got there, we had to ask his buddy to show us where he was, and the guy was fully in the chute several feet down,” Kelleher explained, laughing and shaking his head.

“He had dropped his phone down there and they thought it would be a good idea for him to use a blanket to repel down the chute to get it, but he ended up getting stuck. We ended up using some ropes and tied some knots, so we were able to open the garbage chute from under him. All the garbage shot down and then, as we were lowering him, his little feet were dangling as he was coming down. He looked like Santa Claus.”

Kelleher says he and his crew do not get funny calls often, but “this was a good one.”

“The job is never boring, that’s for sure. “The one thing that never changes is I always come home with so many stories.”

Kelleher doesn’t just gather meaningful stories on the job, though. During long and often stressful shifts, he looks forward to going home to his fiancé and decompressing with their golden retriever, Doug. The three of them love to travel and have driven across Canada and back together in a camper van. Kelleher proposed to his fiancé this past October in Portugal.

When he became a firefighter, Kelleher took an oath to protect people and prioritize life. Although medical calls and vehicle collisions can be difficult, he says he feels a responsibility to be there for people on what might be the worst day of their lives.

“It can be tough dealing with families and seeing that kind of trauma on a daily basis when you go to work,” said Kelleher, “but knowing you can make a difference and help these people out in the best way you can is what helps keep you going and helps keep you sane.”