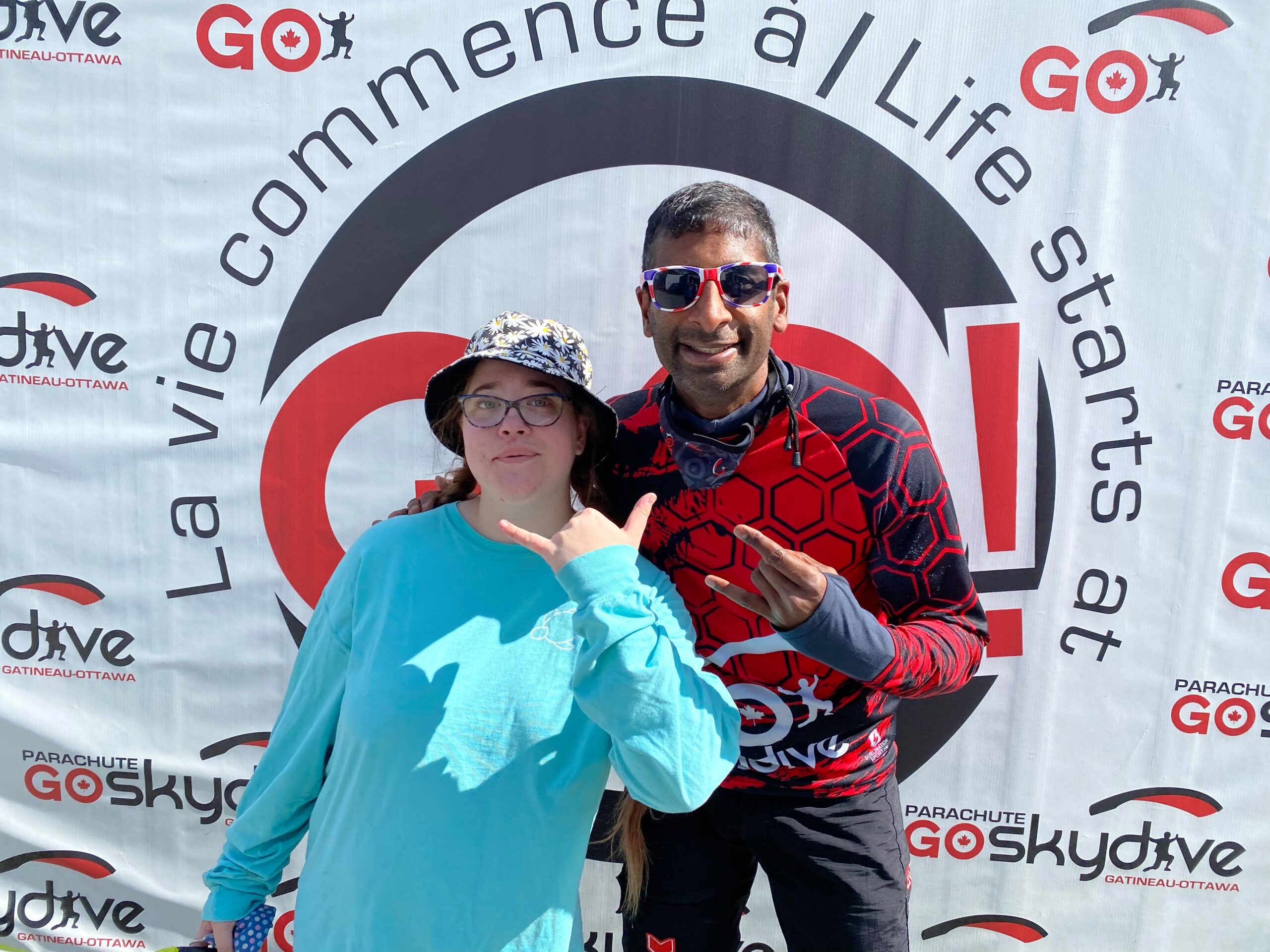 Hari has been skydiving since 2003 and has been a tandem instructor since May 2020, so his experience made me feel really calm and safe.
Photo by: Kassia Skorzewska

For about three years now, I have had the dream of going skydiving to conquer my fear of heights. For as long as I can remember, whenever I get up somewhere high, I feel physically sick and I fear falling from said height.

On a perfectly sunny day last August, I finally got the chance to go skydiving for the first time at Parachute GO Skydive in Gatineau.

Because of the risks associated with skydiving, you must be 18 years or older to sign your own waiver or you must get a parent to sign. The waiver is straightforward, but it gets real when you have to acknowledge that you understand that you might die during your jump if there happens to be a parachute failure.

On the day of my jump, I dressed in clothing suitable for the temperature at 13,500 ft. because, due to COVID, GO Skydive doesn’t allow clients to wear their jumpsuits. Temperatures on my jump day were between 0 C and -5 C.

At the jump site, I was helped into my safety harness and introduced to my tandem instructor, Hari. At this point, I could feel the nervousness growing as it sank in that I would be jumping out of an airplane in less than an hour. And, of course, I was dreading a parachute failure.

The tandem instructors assigned to each jumper gave us a debrief of what we should expect during our jump. Hari shared his experience and credentials, which helped me remain calm.

At around 9:30 a.m., we left for the plane. When I saw the small 18-seater, I started to feel nauseated. I had thoughts of backing out of the jump, but it was too late, and I knew it.

Although I was terrified, my instructor’s experience was a huge factor in making me feel safe. I learned that all tandem instructors must have between 1,500 to 3,000 jumps under their belt, and years of experience.

Hari took the time to make me feel safe on the plane ride up to altitude, showing me the altimeter around his wrist and explaining what would happen at each altitude.

When the time came, Hari and I approached the door of the plane to get ready for the jump. Standing at the edge of the door was almost unbearably terrifying. After 10 seconds, which felt like forever, we rolled out of the plane.

Once we were in free-fall, my nerves and fear of heights disappeared just like that. My mind was so focused on being in the air and falling. I was able to see the ground below us, and it didn’t look like we were so high up. The vast area beneath us also looked very flat.

I didn’t feel the cold as much as I thought I would. The wind was what I felt the most. I had a little trouble breathing in during the whole free-fall as my senses were so overwhelmed.

The 60 seconds of free-fall from when we left the plane at 13,500 ft. to when the parachute got deployed at 5,000 ft. felt like such a long time. During the remaining five to six minutes of the jump, my instructor allowed me to try turning the parachute, which was so much fun!

Once I got to the ground, my body was high from the adrenaline. I couldn’t believe that I had just jumped out of an airplane, and how much I wanted to experience it again.

A few weeks later, I booked another tandem skydive for September. Since my second jump, I have seriously been considering going through the Progressive Free Fall course to become a solo skydiver. My mission to overcome my fear of heights has been accomplished.