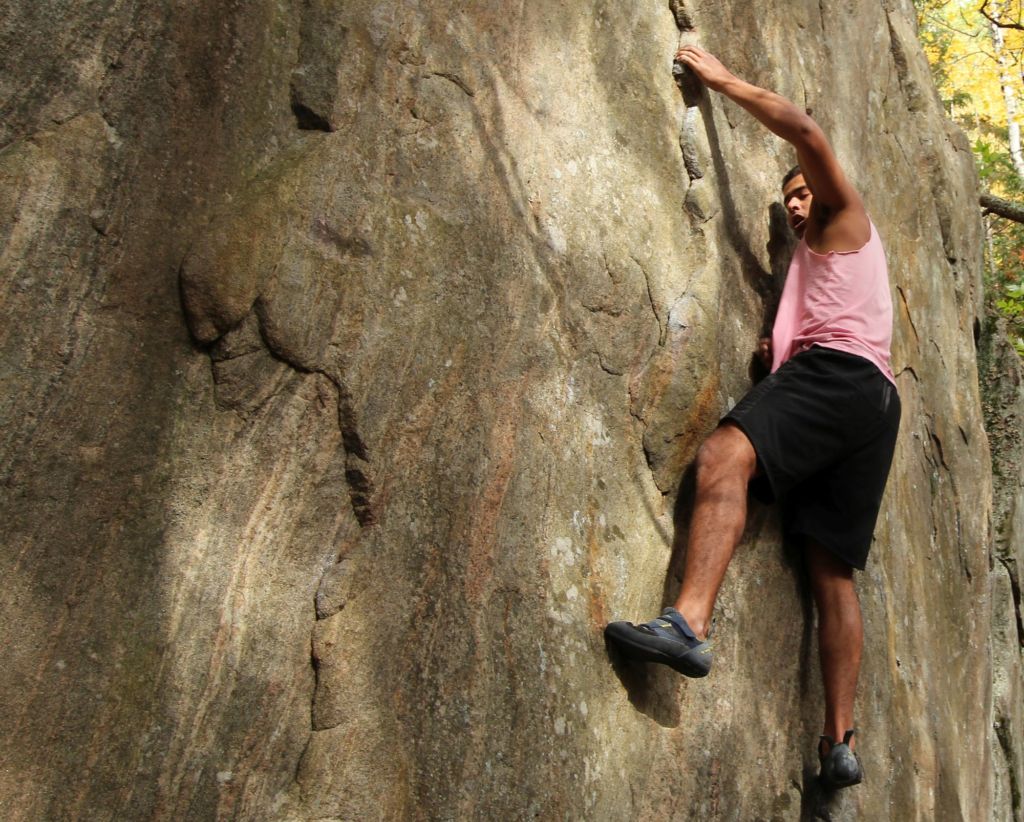 New hobbies can be a challenge, especially if you don’t know where to begin. Bouldering is one of those activities that can both confuse and intimidate people. There are certain concerns often used as an excuse to avoid giving it that first try. We asked five Ottawa students who boulder – each with a different approach and level of experience – to share their stories and advice in hopes of putting these concerns to rest.

What most people imagine when they hear “climbing” is a muscular figure straining to scale a jagged mountainside, sweating violently and shaking with exertion. The climber pulls themselves up one-handed, their bloody fingertips hooked over a tiny rock lip that a pigeon couldn’t land on. They stab a steel bolt into the rock with their bare hand, heave a deep breath and pull the next 85 lb. coil of rope from their rucksack: it’s time for the remaining 140 kilometres up the mountain.

“I definitely hear people worry about upper body strength a lot,” says Carleton University computer systems engineering grad Brydon Gibson, who has been bouldering for a year and a half. “Wrong.”

The first thing they tell rookies at any climbing gym is to take it easy on their arms. The majority of a climb consists of letting your feet support your body weight and using your legs to propel you forward.\

“A lot of people think it’s just arms, but using your arms and hands more than your feet is a mistake,” says Carleton University civil engineering student Thomas McMann. “You use your feet a lot. Upper body strength doesn’t even matter.”

Bouldering is about economy of energy and your journey up the wall – or boulder, or cliffside – will be more sloth-like than Herculean.

If you happen to be very athletic that would be an advantage, especially if your preferred climbing style is very physical. But strength will never determine your limits.

“One misconception I had initially was that some people are naturally built for climbing and they will always be stronger because of their genetic advantages. So not true,” says Ottawa U biomedical sciences student Luka Vukovic. He has been climbing for over two years and is the president of the UOttawa Rock Climbing Club.

“The level you climb at is directly proportional to how often you climb and how hard you try when you do. Everyone improves eventually… so don’t be discouraged when you invite a new friend to climb with you and they flash all your projects right before your eyes.”

2. CLIMBERS ARE A BUNCH OF ELITIST HIPSTERS

The image of climbers as a private and aloof clique literally looking down on non-climbers somehow still exists, usually in the heads of people who have never interacted with one. A recent Reddit post had this to say: “Climbers get excited about coffee, craft beer, Patagonia, Blundstones, and fixies.”

In the real world, climbers are just regular people who really like to hang out, help each other and make friends.

“My favourite part is the community,” says Gibson. “I am a bit of an introvert, a lot of my hobbies are stay-at-home and [bouldering] was a really great way to get out. People are friendly and I didn’t really have to get out my shell as much as I thought I’d have to.”

“[Some] people were significantly better climbers and I was worried that I was kind of encroaching on their territory, I was worried it was a clique of people who are like, “Yeah, we are good.” But instead I found everyone was really friendly and accepting, and it helped me progress faster.”

The UOttawa Rock Climbing Club and the Carleton Climbing Club are great places to start if you decide to give bouldering a try, and they are open to everyone. Bouldering is typically more fun with company, as Ottawa U counselling psychology student Sarah Mather confirms.

“I personally love the fact that is an individual sport, but it’s so easy to do with friends,” she says. Mather has been climbing for just over a year. ”I definitely prefer individual sports, however it’s a great way to combine hanging out with friends and getting some exercise. There’s a group of six of us who frequently go to Altitude in Kanata, and sometimes dinner afterwards.”

3. BOULDERING IS INCONVENIENT AND EXPENSIVE

“The flexibility of the gym times is great,” says McMann. “Altitude is open super late. For equipment you really just need shoes, and you can just rent.”

Carleton computer science student Esti Tweg sums up the differences: “Altitude is bigger and more corporate. They have a lot of wall space. Coyote has more of a homey rustic old school feel.”

“I love that you can go to the same gym week after week and there’s always new problems,” says Mather. A “problem” is a route of matching colour holds a climber must take when scaling a wall.

“The staff do frequent resets so you’re never bored. There’s a huge range of skill level within our climbing group, and everyone is able to find suitable problems.”

All three gyms are open all seasons, making bouldering a great way to stay active and have fun in the winter months.

4. ALL CLIMBING IS DANGEROUS AND YOU WILL DIE INSTANTLY

“I remember one time at Vertical Reality, I was goofing off,” recalls Gibson, “and I missed a [move]. I put a big jump in it and my hand missed the hold and I fell on my back. I winded myself, and some people who had been watching me ran over, asking “Are you O.K.?” I was fine.”

Going up the wall without a harness certainly sounds risky… 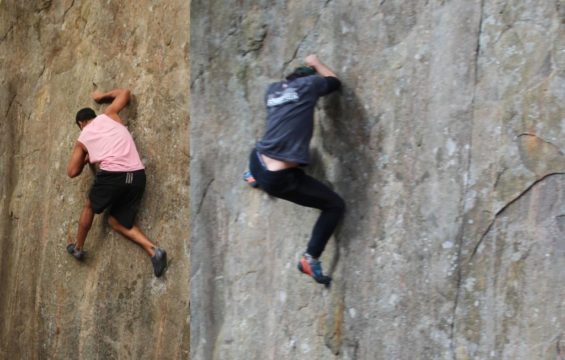 …but unlike other forms of climbing, bouldering is done at low height and over a soft floor, or over mattress-like “crash pads” when climbing outdoors. 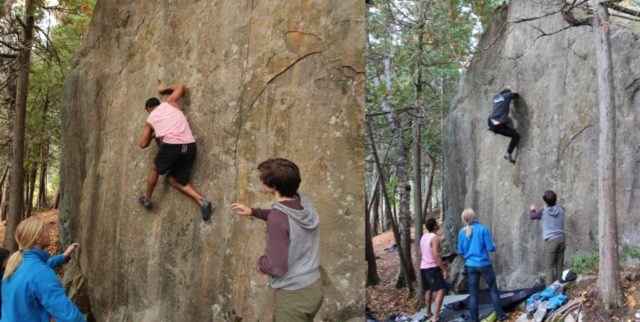 The activity puts emphasis on making smart, conservative choices in order to scale difficult surfaces unsupported, and skills developed that way translate into roped climbing at any altitude.

That’s not to say there is no pain to be had, as new boulderers will soon realize.

“After my first time I thought I could get up the next day and go climbing,” says Gibson, laughing. “I woke up and my hands were just… yeah. I definitely pushed myself. I still do; I climb too much. It’s important to take time off.”

Another reason bouldering is perfectly safe, even outdoors, is that it’s done with people who look out for each other.

Recalling his falling incident again, Gibson says, “It was really nice to have a community of people who give you support like that. Not just in climbing, but in life. That’s what got me. The Vertical Reality community started it for me.”

5. CLIMBING IS DIFFICULT AND TAKES AGES TO LEARN

Like with other activities, the entry barrier to climbing is in the mind and can be conquered by doing rather than thinking. Climbing is a natural inclination for humans, but it’s easy to forget how simple it is and how rewarding improving can be.

“The hardest part was probably coming out of my comfort zone to try harder problems. I eventually realized there’s so many different skill levels at the gym and everyone is too focused to care what you’re doing. People fall and look silly all the time, so don’t worry about that,” Mather says.

“The first time I managed to do a green-leveled problem was a huge accomplishment and I felt really proud I was able to get it.”

“Nowadays people say you can’t get as good as competitive climbers [who started early],” Tweg says, noting that pessimism can be a problem even for experienced climbers.

“[I started climbing] because I was trying to get an award in summer camp, and I couldn’t climb. I decided to practice and I definitely wasn’t great at the beginning. You hang out, you’re solving a puzzle, you fall and try again. It’s about dedication… and having a good day when it counts.”

Tweg has been climbing for over 11 years and has competed internationally. She is the president of the Carleton Climbing Club.

Sarah: I would suggest renting climbing shoes, then buying your own once you get into it. They can be expensive but finding a good pair makes a difference. Keep track of your chalk bag too – it’s so easy to lose in the gym when everyone is climbing.

Luka: The best way to get better is to stick to a schedule, maybe climb once a week, but consistency is key to any commitment you take on. Also, climb with your arms straight, it will save a lot of energy.

Brydon: Make friends with people who are good. That definitely helped me. People who see you climbing might be a bit scared to tell you you’re doing something wrong, but if you make friends they will watch you and climb with you and tell you what you can do improve. And take your days off for sure.

Thomas: My two tips are stretching and patience. Stretch your wrists, forearms and shoulders. When you see a route, you don’t want to go right at it, you want to look at it. Watch people for the first part, see how they grip certain holds, see their technique, then go for it.

Esti: It gets better. The more you do it the less it will hurt and it gets more fun. It’s important to climb with people who make it fun for you.

All photography courtesy of the UOttawa Rock Climbing Club