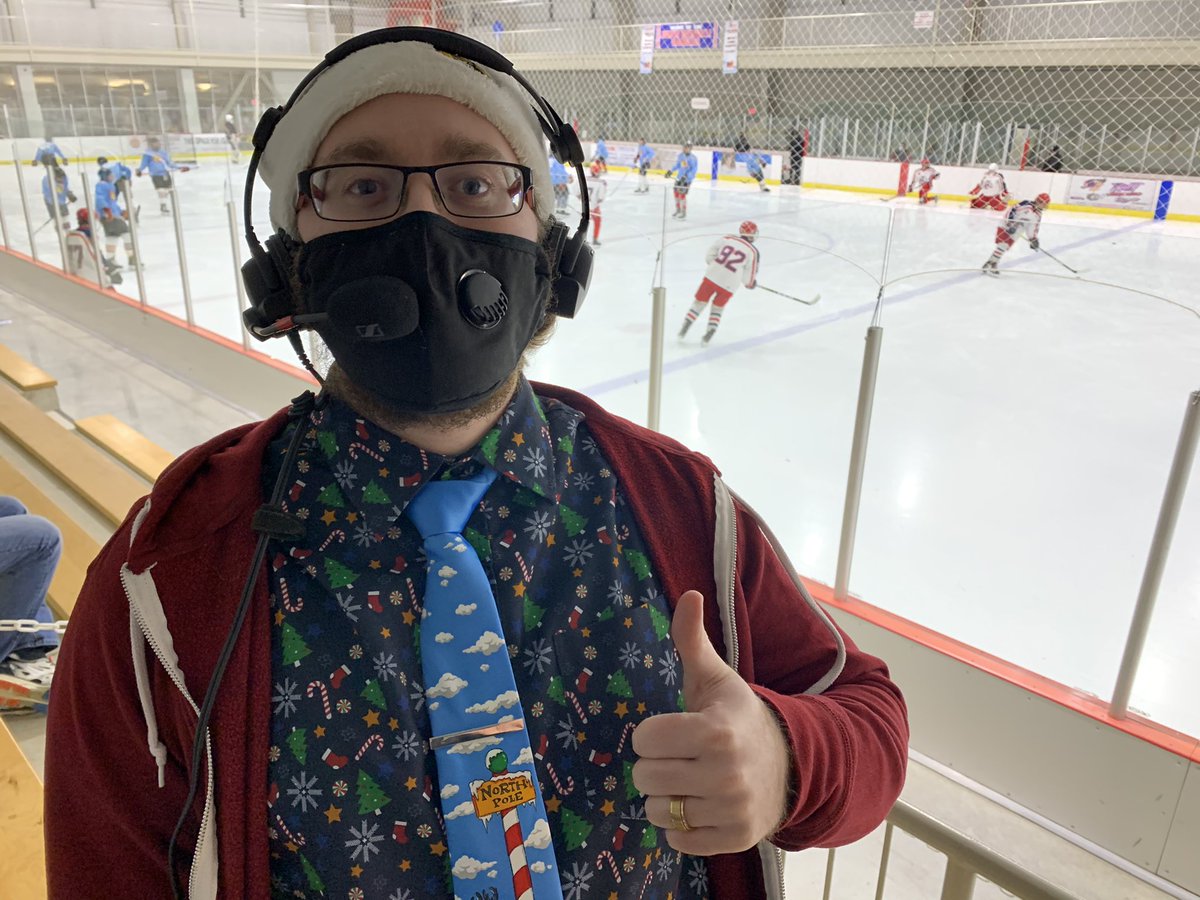 Ryan Woods at the Ingredion Centre in Cardinal, Ont. where the Brockville Braves and Cornwall Colts of the CCHL are taking warmups behind him.
Photo by: Ryan Woods

It was during his high school years that Ryan Woods finally decided what he wanted to do after walking off stage with his diploma: radio broadcasting.

Woods, 22, will be walking off the Zoom stage in just two months from now, after graduating from the radio broadcasting program at Algonquin College.

It was the work of TSN personalities Jay Onrait and Dan O’Toole that inspired Woods to trek the path he’s currently on.

“It’s always been important to me that I would be able to make a difference in other people’s lives,” says Woods. “The people that always inspired me were Jay Onrait and Dan O’Toole. They really created an impact on my life when I was in high school.”

Right now, Woods is on a 14-week placement with the Brockville Braves of the CCHL (Central Canada Hockey League), working with Braves play-by-play announcer Whit Prophet for a project Prophet has called “Trending in Sports.”

While interning, he’s had the chance of interviewing a few notable names in the world of sports.

While he enjoys his placement and the work it entails, his vision of where he’d be interning when he first walked into the program was different.

“I was hoping to do my placement at TSN 1200 or one of the sport radio stations,” explains Woods. “I was either considering going to Toronto if the Fan590 (Toronto sports radio station) was an option. But, unfortunately, Bell and Rogers radio stations aren’t doing any placements right now because of the lockdown.”

Along with his placement work, Woods keeps himself busy with a weekly Sens podcast called the Unparalleled Success Podcast.

“After I graduate, I’m going to continue the podcast,” he explains. “I really enjoy talking with other Sens fans. But, whenever things start to open back up, I’m going to apply for a placement with TSN 1200.”

When it comes to the online learning it seems almost all of us have had to go through, Woods wasn’t someone to complain about the virtual learning settings.

“I enjoyed being able to sleep in for that extra half hour,” says Woods. “I definitely miss seeing many of the people in my program. I think that’s one of the most underrated parts of the college experience. It’s that you get to meet people and build relationships that are going to last you for the rest of your life, and you end up working with many of the people you go to school with.”

Woods is particularly proud of improving his interviewing skills throughout his tenure in the program.

“Before, I would just come up with questions and I would really have a strict idea of where I was going with everything,” he explains. “As I progressed, everybody seemed to give the same advice. It’s just ‘listen to what the people you’re interviewing have to say and build off of that. Don’t be afraid to let them determine the course of the interview and go with what they have to say.’ and I think I took that into consideration.”

Now, Woods sees himself honing his interview skills during and after his internship placement, all with the diploma he dreamed of in high school ready for him in two months.