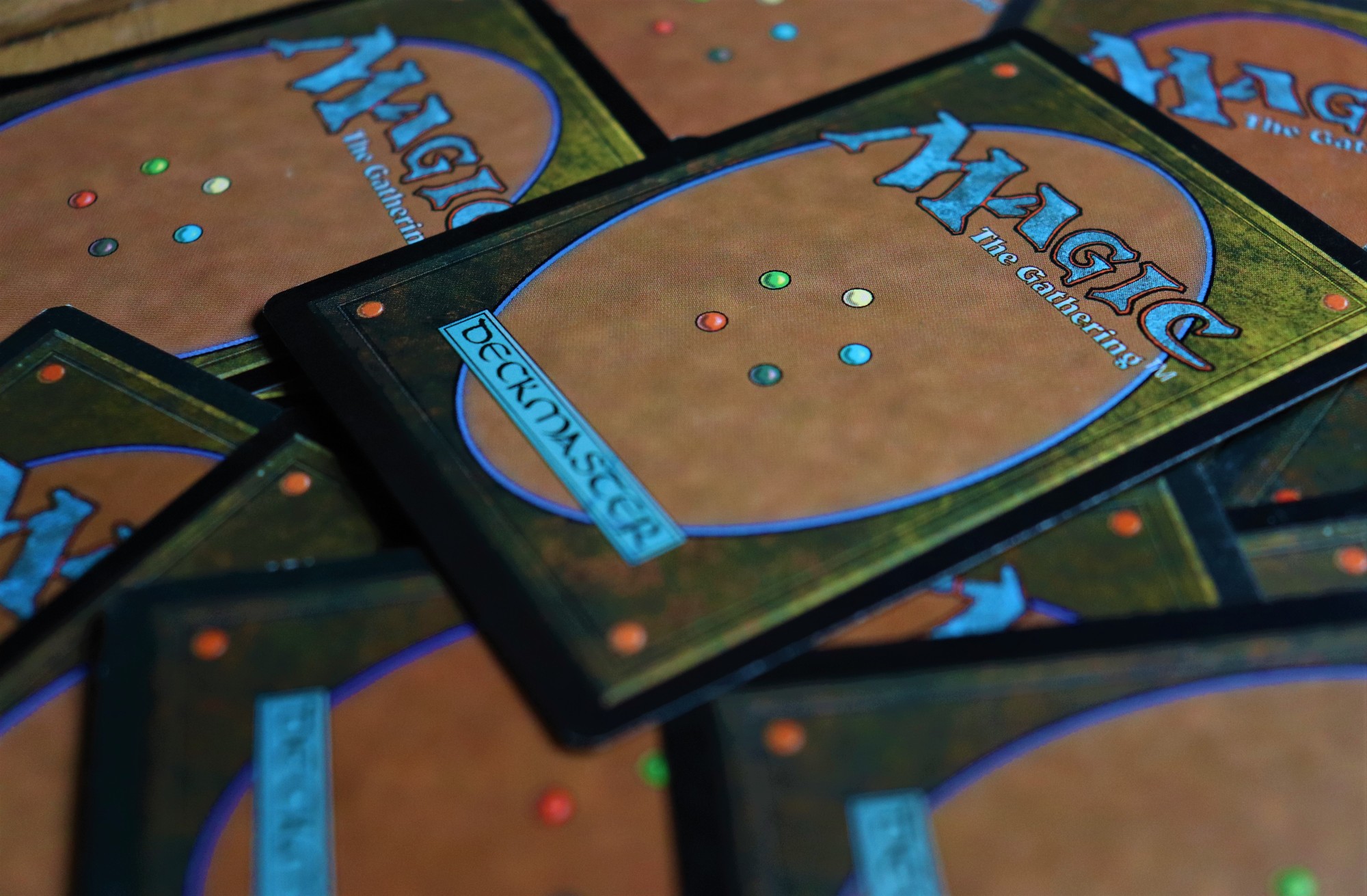 Magic: The Gathering cards have been played, traded and treasured since 1993.
Photo by: Douglas Boyle

Weekends have always been the time to let loose, grab your friends and hit the town, leaving nothing but a trail of red paint and empty bottles in your wake. Not many of us think of competing in a tournament or going on an epic fantasy adventure.

For millions of people across the globe, however, that is their reality. Despite what their weeks look like, from students to career professionals, when the weekend hits, shit gets serious.

I am talking of course about tabletop games. You know the ones – Dungeons and Dragons, Warhammer and my personal favourite, Magic: The Gathering.

There are people who would scoff at the idea of playing role-playing games on Friday night instead of hitting a bar or club. As if it is an admission that you have no life and are insulted in an ’80s style rhetoric where the words nerd or geek are used as an insult rather than the mantle of a mainstream culture.

I assure you how these “geeks” would feel walking into a crowded nightclub is exactly how the un-initiated would feel walking into your local game shop in the throes of a magic tournament or the chaos of a D&D night. We all feel lost when we walk through the door of a venue alone, but eventually, you get a feel for the climate and find your niche.

I have not personally played Magic: The Gathering or D&D since 2012. Somewhere along the way, these hobbies just fell by the wayside for me. Now, looking back at those raucous nights of strategy and competition through the lens of COVID-19, I miss them.

Across the world, there are an estimated 70 million Magic players, and D&D is a cultural phenomenon and has been since the early 1970s. It is hard to fathom or quantify how many people enjoy tabletop gaming as their hobby.

Thanks to a pandemic, the likes of which our time has never seen, we have all lost touch with our communities. Of course, we think of restaurant owners on the brink of collapse, the social butterflies who no longer have social circles to grace and flutter away from, and the religious, whose hymns have fallen silent in holy places.

It is understandable that gamers do not come to mind right away, but for the first time in 20 years, there are no Friday Night Magic tournaments. With Ontario asking citizens to refrain from visiting households and non-essential businesses, the environment for D&D is now restricted. In only a couple months, millions of people lost their community.

Friday Night Magic is always a fun time. With individual game shops deciding which rules or formats to use based on the preference of the customer. You could stroll in, meet new people and bond over the theme of the night – Magic Cards. It didn’t matter if you won or lost, at the end of the game you shake your opponent’s hand and thank them for the game.

Magic tournaments at your local game shop are always casual, until pro season rolled around. With the prospect of traveling the world to compete under the banner of your country’s flag on the line, a tension fills the air.

The Magic Pro Tour is a place where players have a chance to compete with the latest released card sets. As if sitting close to a stranger and shaking their hand is not foreign enough these days, the Pro Tour gathers the best players from around the world for an invite only tournament of the best-of-the-best in a chosen host city.

Participating in pro is the dream of many competitive players. An international competition might feel like it is a world away and only for the best, but the gatekeeper to that staggering $50,000 prize pot is your local game shop.

Every year there are qualifier tournaments held across the world and local game shops became a battleground for those top spots. Sanctioned judges mediate conflicts of rules, and the shop owners would register players on an official server.

I have experienced seeing my name paired against others on a big flat screen TV. I have entered these tournaments with big dreams of wearing my country’s flag on the world stage. I have also had those dreams dashed.

I do not doubt for a second that when the COVID-19 pandemic takes its place in history alongside the Spanish flu and smallpox, this little community will come roaring back into the limelight of tabletop gaming. Tournaments will resume, and game shops will once again be a place for gathering and losing track of your weekend hours.

I did not feel this way until I spoke with Brandon Carkner, a library and information technician student at Algonquin College. As the leader of Algonquin’s tabletop RPG club, he and the co-leader have been running games of Dungeons & Dragons since August over Zoom. The Students’ Association has supported their club by supplying them with a subscription to Zoom.

It might not be gathering around the table for a Saturday night of gaming, but Algonquin’s D&D players did not miss a beat when it came to pivoting to an online format. “During the summer semester we had a slow and constant drip of members coming into the club,” says Carkner. “When the fall semester rolled around, we did get a quick burst of members leading up to October but that has slowed as of now.”

Not only are our local tabletop players continuing to enjoy the games they love, students are continuing to join their club. Carkner has made efforts to build bridges between Algonquin’s and other campuses, to increase the player pool for the groups to draw from.

“In the last couple of weeks I have reached out to other university and college clubs that are of the same type as our club, TTRPG and similar clubs, in the hopes of introducing various clubs together so that members could possibly organize more activity between themselves,” says Carkner.

Speaking with Brandon makes me question why I’m so pessimistic. It is reasonable that during a trying time, our thoughts can be influenced by negativity, but under the looming shadow of COVID-19, life is not stopping.

The TTRPG club at Algonquin College has been the recipient of the Wizards of the Coast digital support program. The creators of these varied tabletop games supply codes for online resources like rulebooks for Dungeons & Dragons and digital cards for the newly released Magic: the Gathering Arena.

Dungeons & Dragons players have valuable resources online like Discord and Zoom for communication, Roll20 to help visualize the game table and email for scheduling.

With the release of their online game Magic: The Gathering Arena, there is now a modern and virtual substitute for the card game. The publisher of Magic, Wizards of the Coast, are still releasing their sets of physical Magic cards.

I see now that Magic: The Gathering and all the other tabletops from prolific to indie are not dead because of the pandemic. These are giants in our culture, and giants always wake up from their naps.

This community is ready to fill hallowed halls once more. The sound of dice clattering against tables is a memory right now, but it will not be for long. We are waiting to talk, trade and battle.

If every action has an equal and opposite reaction, when the game shops open their doors to us once more, I believe we will see a resurgence unlike any other in gaming.

That flakey friend will show up to your D&D campaign, the saltiest of players will be happy to lose a match or two of Warhammer and the sound of Magic cards being shuffled will signal the start of tournaments. I have a feeling the retired and cynical players of the old guard will show their hands again.

I will be there. Will you?