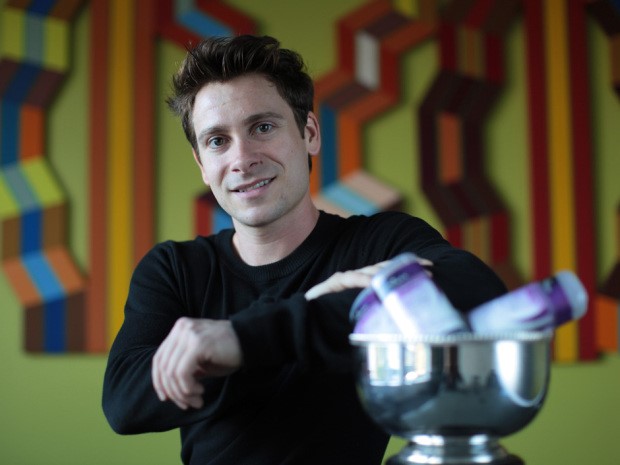 Nick May, founder of REMAY. The company makes shaving gel, which is inspired by May's early idea.
Photo by: Nick May

While shaving for the first time at 14, Nick May came up with an idea to create a type of gel that works like shaving foam as he found the foam inconvenient to use.

“The foam smelled like it had too much chemicals,” said May. “It was thick and it clogged the blades. I couldn’t see where I was shaving, the aerosol can was rusting the bathtub.

“I figured you don’t need all the foam, you just need something clean and thin, like a slippery layer, to protect the skin.”

May kept the idea at the back of his mind, and eventually turned it into an innovative product.

The shaving gel that May created has made him a successful entrepreneur at the age of 32.

May, is the founder and owner of REMAY, an Ottawa-based company that is dedicated to the manufacture and sales of the shaving gel bar. Founded in 2011, REMAY has expanded quickly over the years, with a total revenue of about $800,000. It went from a network of 67 retail locations on campus and in pharmacies to over 1000 locations, including superstore chains like Loblaws.

May said his goal is to help customers make shaving less of a hassle. He believes that the shaving gel will replace shaving foam in the future.

“People will soon realize how outdated the foam is and how silly it even looks,” said May.

To make his earlier conception an actual product, May integrated his interest in science into his business idea during his attendance at a local adult high school, where he took chemistry and biology courses.

“I was fascinated by all of it,” said May. “I wanted to apply what I was learning into real life, for the fun of it. I remembered the idea I had for a better shaving cream when I was younger, so I wanted to make it.”

May drove around town finding supplies, meeting pharmacists and asking them where to find what he needed to build the prototype. He started making samples in his home kitchen.

“I would bring samples back to my teachers at school and show them,” said May. “I was having fun with it.”

Right before going into the chemistry program at Carleton University, May happened to learn from a friend that Carleton was offering $5,000 and business mentorship to students who would like to pitch their business idea to the university.

“I couldn’t believe how cool that was so I jumped on it,” said May. “After selling my motorcycle for $5,000, I figured I would give it a shot. I ended up winning and everything snowballed from there.”

Through the project, Carleton helped May to connect with business students. The connection went beyond Carleton and extended to University of Ottawa and Algonquin College. May even used the campus bookstore at Algonquin College as his first retail location when he took English Business Communications at the college.

Chris Castillo, a professor at Algonquin’s business management and entrepreneurship program, said that post-secondary institutions play a crucial role in facilitating the success of young entrepreneurs.

“Universities and colleges always have the interest in supporting the entrepreneurs,” said Castillo. “They provide education, connections and the ecosystem that supports what entrepreneurs are trying to do in business.”

Castillo added that the post-secondary institutions also offer opportunities for people to exchange their business idea.

“Career fairs and events on campus are very helpful,” said Castillo. “They allow students to pitch their idea and meet with potential investors.”

For May, the biggest challenge at the beginning of his business was to overcome the technical flaws and the financial obstacles that followed.

Making something from scratch when it did not exist was difficult for him. It involved lots of trial and error. From formulation to packaging, marketing and cost-efficiency, they all had to come together as one.

May had to figure out how to eliminate defects in the prototype. It was time-consuming and expensive to make improvements and every small issue could take its toll. It took years to test and finalize the prototype.

“At first I was getting 50 per cent of defects,” said May. “Half of everything I was making had to be inspected and discarded. It was very frustrating, but I kept at it. We had meetings, made changes, made more runs still with many defects where parts would not hold together.”

It has been a real struggle for May and his team to finalize the prototype. They went from 25 per cent to 10, five and one per cent of defects. It then rose again to 25 per cent.

May realized something went wrong. With assistance from his friend, they dissected the mould and found out that it was a structural problem. After May did a final change to the prototype, it was ready to go.

Today, REMAY’s range of business has gone beyond Canada and spread out to entire North America. According to May, the company was well-known in the U.S. because of the REMAY Shave Bar Club, where consumers can experience the product and order monthly supply of it.

“The future is customers wanting to connect to brands they love with automatic delivery on items they will need,” said May.