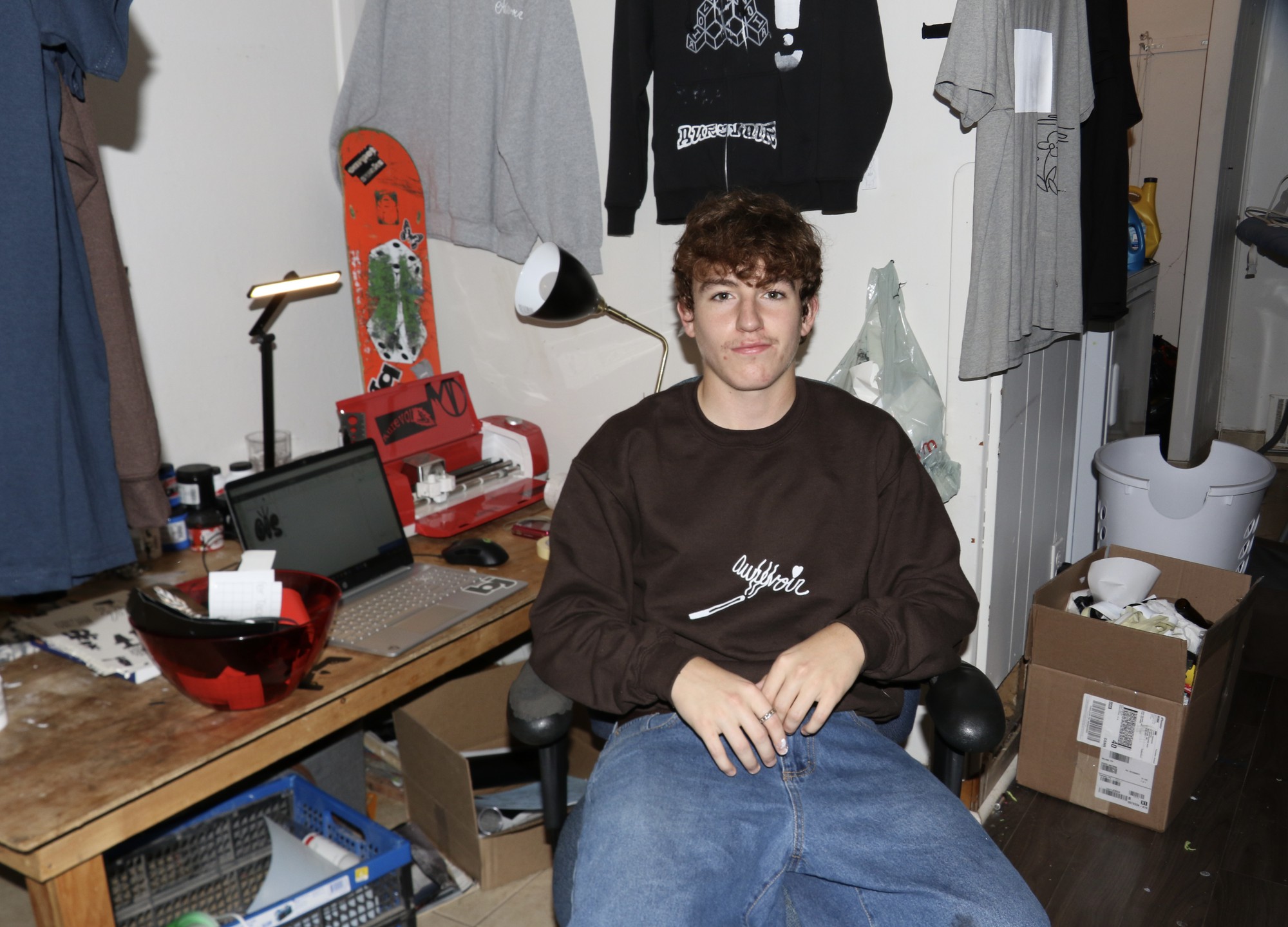 Lucas Brassard, Business and Entrepreneurship student at Algonquin College works passionately from his basement on his clothing brand Aurevoir.
Photo by: Sophia Adams

Upon entering a home just minutes away from Algonquin College, I follow a staircase down into a dim basement, where a single strand of lights strung between ceiling beams is the primary source of light. More clothes are hanging on racks than I have ever seen in one room. Lucas Brassard is in the middle working on his next design for his brand, Aurevoir.

The space is in every way the “ideal” hangout spot or, in this case, the perfect production space: This is a basement that screams “art in the making.” With skateboards hung up on the walls for decoration, racks full of clothing, more racks in the process of being made and a table set up where the magic happens, Lucas Brassard’s basement has been transformed into the heart and backbone of his brand.

Brassard is dressed in one of his own designs, a brown sweater that has Aurevoir written in white cursive letters on the front, emphasizing the subtle yet chic look intended for the skateboarding crowd.

“Without skateboarding, Aurevoir would not be what it is,” says Brassard, a 19-year-old second-year business and entrepreneurship student at Algonquin College who has found his passion. Spending his time outside of school skateboarding and working on his clothing brand, Brassard, who moved to Ottawa over a year ago from Belleville, is ready to make his mark in the fashion industry in a way that is personal to him.

With a tough demeanour, a stare that you know means business and a warm smile, Brassard is an outgoing and optimistic young entrepreneur with big hopes for his clothing brand.

Having the occasional help with sewing from his good friend, Bryan Do, Brassard sees his roadblocks and successes as chances to improve. “If we mess up, we do it again. If we get it perfect, we do it again,” Brassard says.

Aurevoir is considered “streetwear” clothing. A brand for skateboarders made by a skateboarder; important to the image Aurevoir wants to portray, it “will stay that way for the rest of its lifespan,” says Brassard.

With the use of neutral colours such as brown, white and black and overlaid with distinguishable patterns, Brassard is focused on producing fashionable, high-quality clothing for his customers.

Do, who met Brassard in Belleville, describes him as “a very ambitious and passionate individual who puts his full effort and time into the things and the people he loves.”

When Brassard was growing up, he looked up to his brother in terms of fashion. “He refused to fall into ‘trendy’ cycles like most people do with clothing,” Brassard says. He dressed with “creativity and individualism” that people admired. Brassard strives to achieve the same effect for people who wear his clothing. Enthusiastic to achieve the same for himself, Brassard jumpstarted his love for design at just 17 years old.

Aurevoir has since developed into the brand that it is today. Brassard starts with clothing acquired through thrifting or wholesale “blanks” ordered in bulk online. Working around his schedule as a student, some days he manages to make 10 shirts. Other days he makes none at all. The process is a multi-step, multi-hour operation that is as exciting to watch as it is to see finished. Once Brassard has the clothing, he will draw up the design that he wants to transfer onto it, either on paper or using Adobe Illustrator. Once the design is complete, it is then printed onto blank vinyl to be transferred to a silk screen for screen printing.

“The screen-printing process is more authentic than other methods of printing because of the difficulty and precision it takes for more detailed and coloured prints,” Brassard says.

Offering a variety of clothes and currently working towards its release of tees and full-zip sweaters, Aurevoir is intricate yet simple in design.

Brassard sells his clothing online @aurevoir.ca and @itsooks, charging $25 to $35 for tees and $60 for hoodies.

Since Aurevoir is a relatively new brand, Brassard has much more that he is eager to bring to the table, including sweaters, beanies, pants and shorts, as well as printing on skateboard decks.

“As Aurevoir is a very new company we still have much in store for our future,” Brassard says.

Well on way to achieving his own form of “creativity and individualism,” Brassard dreams of opening his own shop someday.