It takes motivation and dedication to start your own business and make it successful. Equally, it takes hard work and talent to become a professional athlete. What does it take to do both at the same time? Well, it takes someone like Nate Behar.

Football was always key for London, Ontario native Behar. Scouts around Canada knew what they could be getting their hands on as he headed towards Canadian university football, but many were stunned by his decision. He committed to the Carleton Ravens shortly after the program was scheduled to come back after a lengthy hiatus.

“It was the start of something new and, in hindsight, that’s kinda funny now because I started a business,” said Behar. “The Carleton direction was crazy because I was in Western [University’s] backyard and they had been recruiting me since I was 14 or 15 years old. It was just an opportunity to start something new, it was exciting.”

“It was also just the coaching staff,” he explained. “Having about eight full-time coaches and they were just so bright and had that fire and energy in them.”

Although the move may have been questionable in the minds of many, it paid off for Behar. In four seasons with the Ravens, he finished his career with 178 receptions, 2,577 yards, 21 touchdowns, and an unforgettable catch at the end of the 2014 Panda Game to secure a victory for the Ravens.

“It was wild, it was a bizarre feeling,” said Behar of the touchdown catch in the 2014 Panda Game. “They had it on repeat on T.V.s and stuff like that, and in the library, all six T.V.s behind the check-out counter were playing it. It was a cool moment for sure.” 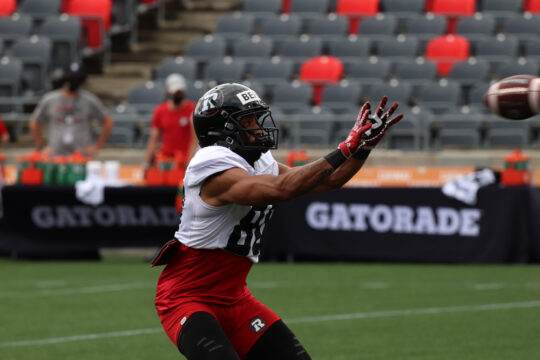 Through these milestones and more, Behar had plenty of interest from teams in the Canadian Football League. In the 2017 CFL Draft, Behar was selected fifth overall by the Edmonton Elks where he played his first two seasons in the league. Before the 2019 season, Behar made the move to come back to the city he called home for four years while at Carleton, signing with the Ottawa Redblacks.

“It was very natural,” Behar said. “Jeremy [Snieder] and I had a conversation before the draft but Ottawa didn’t pick until ninth and we knew that I wasn’t going to be there. It sucked because we knew it was a match made in heaven. When I had the opportunity [to come back] and things didn’t go super well in Edmonton, it was like we were going to make it happen.”

On the football field, Behar returned for the 2021 season where he solidified himself as a valuable receiver on the Redblacks offence. He was promptly rewarded with a brand new contract for the 2022 season. Off the field, he is striving to hit new limits with his brand, The FireWork App.

The FireWork App is a platform built to connect athletes with brands (and vice versa) to allow them to create partnerships with one another. Behar created the app to help athletes who have less reach than players inside the major four sports in North America find brand partners and earn some extra money that they may not otherwise get.

“People outside of the core four or five sports where money is a bit of an issue see million-dollar shoe deals going on and realize there are athletes who are marketable,” said Behar. “They all want deals, and it’s complicated to get them.” 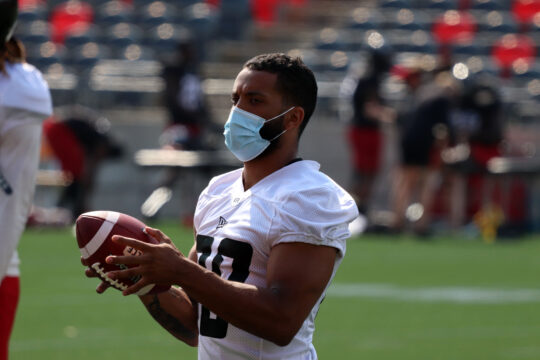 There are a couple of ways that brands can find athletes they hope to work with, Behar explained. The manual way to do it is by posting something, similar to a job posting that you would find on other job search websites. The other way is through an algorithm that matches brands and athletes together based on common interests.

“It’s been less than half of a year in the market,” Behar said. “We’ve seen some awesome stuff. We actually just had Nic Demski work with a company doing an athlete pro tip of the day, and that paid a good amount. We’re seeing some great stuff going on.”

“The appetite is just massive,” he said.

Of course, being the owner of a company and a professional athlete can be a monumental task. Both demand much of your time, and having good time management skills is critical.

For now, FireWork is still small, and Behar is okay with that, but growth is in the plans.

“Just continue to bring in more and more deals,” he said. “We’re finalizing some pretty cool tech stuff and continuing to grow.”