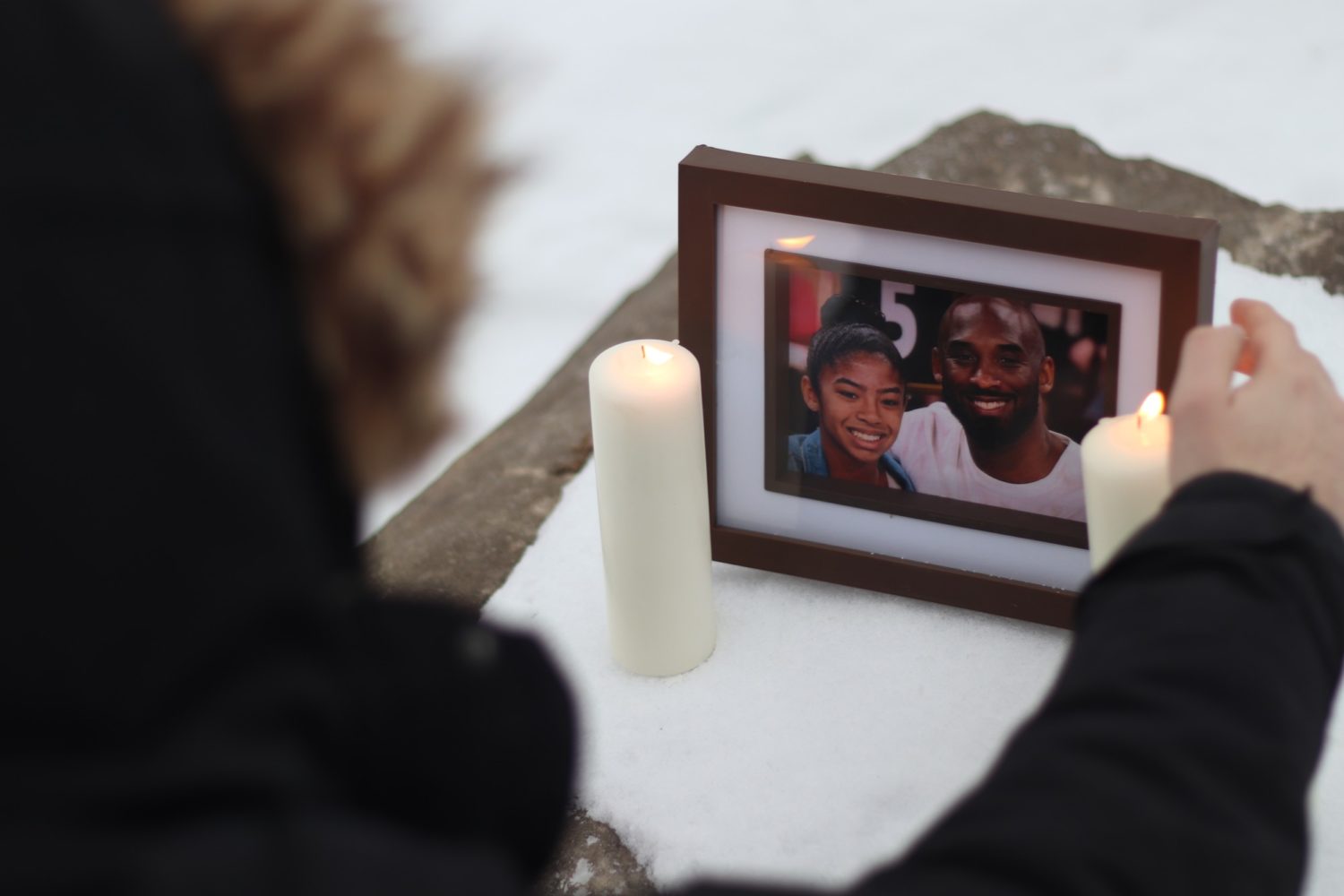 After the tragic helicopter crash, students in Algonquin College mourn the loss of Kobe Byrant and his daughter.
Photo by: Joseph Wang

Kobe Bryant, a legendary NBA player at Los Angeles Lakers, passed away at the age of 41 after a helicopter crash in Calabasas, Calif. on Sunday, Jan. 26, 2020.

The tragedy has left family, friends and fans in shock.

Students in Ottawa grieved for Bryant. They recalled how he inspired them to take up basketball.

When Andrew Yan To, an Ophthalmic Medical Technology student at University of Ottawa, heard about the fatal accident, his face went numb.

“When I first saw the news, I thought it was a hoax,” said Yan To. “When I realized that it was real, I was lost for words.”

“Someone you see on TV, someone you admire, was just gone like that. It wasn’t easy to accept.”

The fact that Bryant’s daughter and other young kids also died in the crash made him feel even sadder.

Yan To felt like he was carrying Bryant’s spirit with him when he put on Bryant’s jersey.

Aston J. West, an Algonquin Thunder event staff, is one of many who have seen their own potential through Bryant, especially through his work ethic.

“He wasn’t the tallest or the most gifted player, but he worked really hard to get what he had,” said West. “He just showed that you don’t have to be the tallest, fastest or the strongest to get yourself to the top.”

West said even when Bryant reached the top, he never paused in exploring his potential. No matter how good or how old he got, he always wanted to keep learning.

“He was always asking the coach ‘what can I do to become better?’,” said West. “He was Kobe Bryant, what couldn’t he do?”

In fact, Bryant’s influence on West has extended beyond basketball.

He said Bryant has motivated him to do better in every pursuit and not to let anyone tell him what he can’t do.

West learned about the crash when two of his friends texted him and mentioned that something happened to Bryant.

“I was really sad and heartbroken,” said West. “Then I found out that his daughter also passed away, and nine others as well. It’s just the way it happens, it’s really hard to take in.”

Gabe Boswell, a student at the Recreation and Leisure Services program at Algonquin College, could still remember watching Bryant’s game against Denver Nuggets when he was about five.

“He was doing his outrageous moves like crazy,” said Boswell. “He was doing windmill dunks. He was beating everyone to the post.”

Not only did Boswell see Bryant as a fast and versatile player, he also saw Bryant’s personality shine on the basketball court.

“You could see how nice he was,” said Boswell. “He would embrace his teammates and encourage them. He was a motivator, and even at a young age of 22 or 23, he was a born leader.”

Boswell believes that Bryant was one of the greatest NBA players, not just in the century, but all the time.

Bryant’s last game, in which he scored 60 points, was remembered by many.

Matthew Hinoporos, a Carleton student taking the Bachelor of Commerce, is one of them. Although he has not watched a lot of Bryant’s games, he was impressed by Bryant’s finale.

“The Lakers were not going to make it into the playoffs that year,” said Hinoporos. “Yet he showed everyone that he could still compete. He put up such an incredible performance.”

Hinoporos was influenced much by Bryant outside of the basketball court.

“He never backed down and always gave it his all, and he expected everyone else (in his team) to do the same thing,” said Hinoporos. “His spirit and resolve are always so inspiring.

“That doesn’t pass away no matter what.”