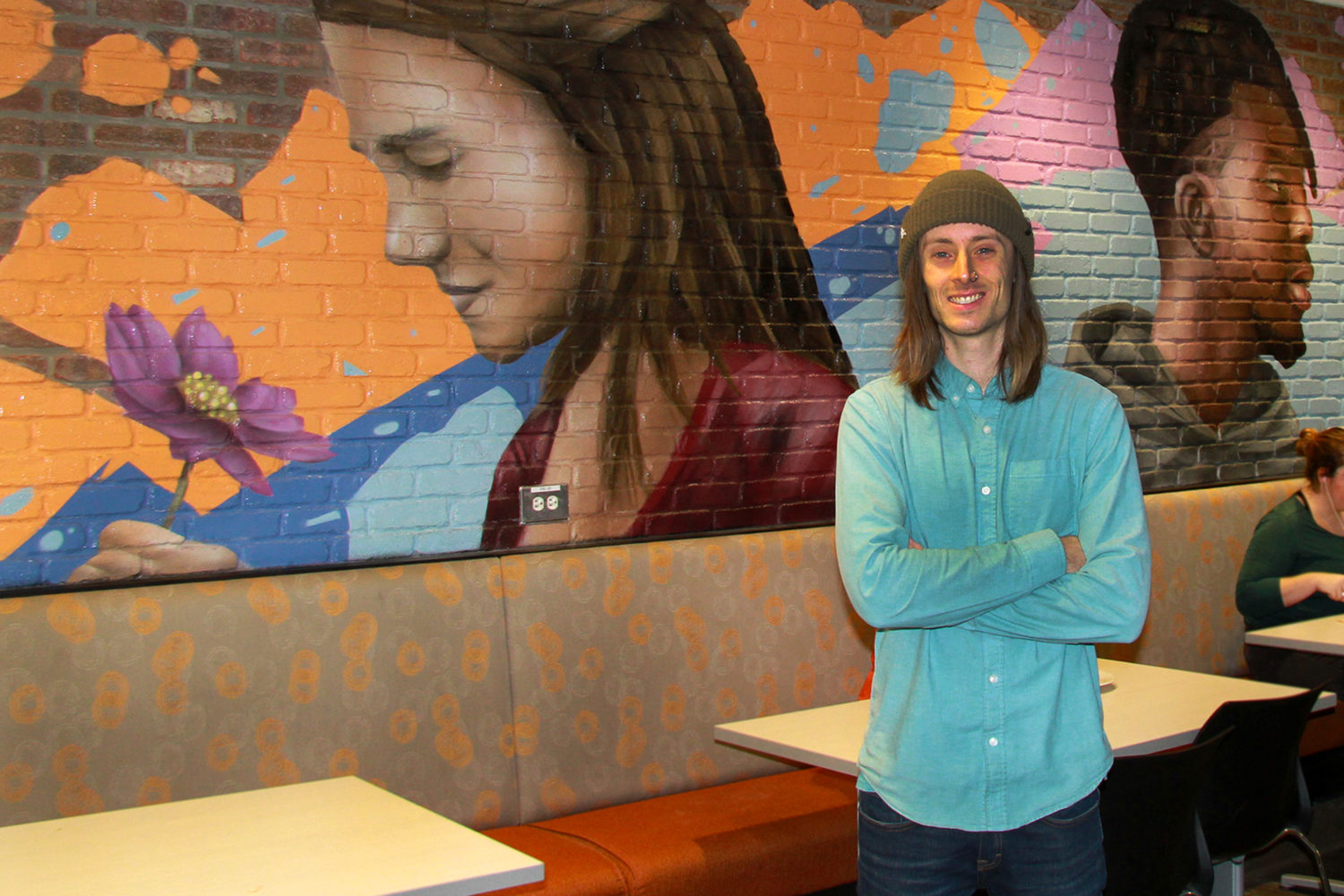 Ryan Smeeton stands in front of his mural, "A Place to Grow." The artwork was completed last summer as part of a commission project for uOttawa.
Photo by: Dana Simpson

When students at the University of Ottawa returned to class after their summer breaks this year, they were greeted by some new colour on campus.

A Place to Grow, a work of art by muralist Ryan Smeeton, brings together his two different worlds of art in a harmonious expression of growth and experience on an exposed brick wall in the university dining hall.

Smeeton, who is himself a University of Ottawa fine arts alumnus, has been working as a professional muralist and street artist on a full-time basis since 2015.

But it wasn’t in Ottawa where Smeeton began paving his road to large-scale success.

Following a job as an in-house carpenter and display artist for a downtown Ottawa retailer, Smeeton and his wife left their jobs and travelled across Europe on a long-term holiday.

“We did three months in Europe,” said Smeeton in an interview on the uOttawa campus. “One month of that was a residency in Spain, in this really rural area where there were a lot of abandoned walls, so it was really the first opportunity I had to play around with painting murals on a big scale.”

Smeeton credits this experience abroad in La Cueva, Spain to the beginning of his career in Ottawa, reflecting that if it weren’t for the murals in that small, Spanish town, he would not have been able to make the portfolio he needed to secure further opportunities at home.

“There’s a Catch-22,” said Smeeton. “No one is going to award you a big mural if you don’t have any big murals to show for it.”

And while it was tricky to enter into the world of large-scale public art, Smeeton says his BFA helped him to prepare for the technical side of becoming a professional artist.

“It definitely provided a good basis for how I think about art and approach art,” said Smeeton. “Whatever kind of work you’re producing at the time, [the professors] will nurture that and provide feedback and critiques which is great, and it gets you to talk about your work.”

So when the University of Ottawa reached out to Smeeton to inform him of an open call to paint a mural in the dining hall, Smeeton felt well prepared. And rightly so, considering his vision and experience won him the job.

Smeeton says his inspiration for this piece was, quite simply, growth.

“When I think about my time here, it’s just such formative years,” he said. “When you’re here at the university you do so much growth. Academic growth, but also – and maybe more importantly – personal growth.”

Smeeton illustrates his vision, in part, through floral imagery – a recurring theme across many of his murals.

“I feel like the purple flower represents something bad, and the white one, a revelation,” said Miléna Sokolwski, second-year student of mathematics with a minor in music at uOttawa upon reflection of Smeeton’s piece. “I also enjoy the integration of the light of the ceiling in the painting – just above the white flower.”

“The figures look away from each other as if both have sunken into their thoughts,” said van den Enden when asked about A Place to Grow. “It resonates with the individualist society we live in today, in which our generation is being told everything is about the individual. If only we would turn around to face each other.”

“To me, this is a reversal of street art, playing with a sense of irony that could either diminish or strengthen the piece as an artwork,” said van den Enden. “[It’s] a subtle form of protest against the social status of what it means to label something ‘art.’”

“Painting on a wall doesn’t make it street art,” said Tkachenko Luckman. “If something is inside a building and was a commissioned piece, it automatically becomes a mural and not street art.”

Regardless of the different views held by these uOttawa students, A Place to Grow appears to be living up to its intended purpose.

“I like to leave my pieces open to interpretation a little bit, so I hope it speaks to people in different ways,” said Smeeton. “I guess overall I just hope they find it interesting and engaging but whatever they take from it, however they interact with it, whatever conclusions they draw from it, as long as it prompts thinking or questioning in some way then that’s the goal for me.”