Every day hundreds of Ottawans meet Dominique Boisvenue’s abstract and colourfully-geometric art on walls all over the city. Her latest project has her working with the Youth Services Bureau on a graffiti-inspired spray piece reflecting their unique space, including a native pride symbol, flowers, faces and many swirls of colour.

At 28, Mique – as she’s known in the local art scene – already has her work displayed all over the city. Boisvenue has accomplished what many young artists have been striving to do- find a way to bridge the gap between un-commissioned street art, and funded public instillations.

Over the last few years the streets of Ottawa have been getting noticeably more colourful.  The public art movement has picked up and more buildings and businesses are supporting local artists in their attempts to beautify, diversify and display their work. These installations are going up all over this city.

Public art was always seen as being monumental things plopped into plazas and open spaces, but by definition they have evolved into functional and community art done on a smaller scale. Their intent: making the areas they inhabit more interesting and appreciated.

However, these pieces, had hardly been student-centric.

In attempts to change that, the Ottawa School of Art, where Boisvenue attends, started a program interlinked with the Chinatown BIA where students learned how to navigate commission works. “Me being a graffiti artist I jumped on that right away,” said Boisvenue.

The result was an initiative called Chinatown Blossoms, that has gotten city-wide acknowledgement.

“I wish more people would take note, in every little corner of the city to bring more colour in… It really beautified the whole area. And the pride, look at how that community grew. That’s why blossoms was the perfect name for it,” said Boisvenue.

The community appreciated what her and fellow artists achieved, so much that Boisvenue was able to turn it into a summer gig, painting more murals in the area. She’s still being approached but there isn’t a lot of light left this year, so she’s found herself Google-ing sunrise times to go finish pieces before the winter dark hits. 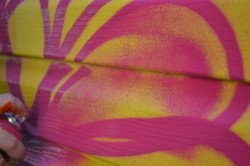 “If you’re going to get off your ass and go look there are opportunities. I am definitely not the best artist but I’m very loud so I guess I’m determined enough to go find those opportunities,” said Boisvenue. “I think the door has been broken, right now between everything that’s going on.”

Boisvenue is an example of the kind of student-artist the City of Ottawa would like to see more of. Through her work with Crimestoppers and MascOnline, she encourages more young people to try their hand at the commission process. Citing having more space than currently available at the legal walls to be able to turn a blank space into something dynamic.

“It’s fun to see people approaching us not knowing at all if this is legal, illegal, if something they can have done on their walls, and how they would go about it,” she said. She thinks that murals are something that should happen more, and feels like there are currently a lot of missed opportunities because of the inability for spontaneous work due to the levels of bureaucracy in getting approval.

Right now Ottawa can’t compare to it’s nearby counterparts like Montreal or Toronto, who are much older cities when it comes to their acceptance of art always being in the cityscape. An easy way to bring Ottawa closer Boisvenue thinks, is through clarifying clearly the difference between graffiti tagging and graffiti murals, to build acceptance so murals will last and people will go throughout the year to appreciate them because they know they will still be there.

“There would be a lot more respect and a lot more quality in the work and then we’d be able to compare ourselves,” she says. “We don’t see that here and it’s sad because there’s so much tension between the City and artists because, ‘oh artists are vandals!’”

Boisvenue feels that the more open dialogue between the City and artists will benefit everyone. Only two of the murals in Chinatown have been tagged, whereas before the murals went up, it was a high-tagging area.

The City of Ottawa has become to take note to the impact this project and similar others have had.

“When you go to different cities you look for the public art and Ottawa as a G8 capital we need to do that,” said Julie Dupont, portfolio manager of the public art program.

Having public art makes for safe and inviting environments, as well as giving a really cool vibe to a city in making it a destination point, she said.

“It’s the idea of place-making, public art is a really lovely way to engage a community but also have it reflect back what that community is,” said Dupont. “It really is a symbiotic relationship in that sense. The artist needs the community but the community gets reflected back, in what the artists does for them.”

Dupont feels the City has to seed these opportunities, but then get out of the way.

“We are trying to make bureaucracy that is heavy, as nimble as possible to really give artists opportunities to make Ottawa a cool place.”

Dupont and her team are currently exploring ways for younger artists to get their feet wet in the public art world, through smaller projects. There aren’t as many engaged as they would like and Dupont attributes this to the daunting budget and timeline of most public art commissions.

“We’re hoping to create smaller opportunities where we bring in more seasoned artists to work with a young emerging artists to work on these projects so they have someone to mentor and guide them through the process, because you need constant flow of new crop of artists,” she said.

Students are a constantly shifting and evolving demographic, but they are that generation of innovation. They think about things in a very different way and their perspective is valuable, says Dupont. 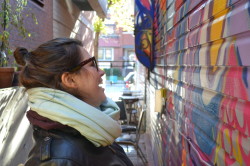 It’s a very exciting time to be an artist looking to get into urban art because with every new capital development, or any new construction, one percent of the budget for each project is allocated for site-specific art. So, The more the city builds the more there will be opportunities for art.

In the coming year there are millions of dollars being allocated to new public art projects. The development of the O-train is bringing art to both Carleton and University of Ottawa’s rail stations that are hoped to engage students. Both campuses are also looking themselves at campus-centric public art programs.

Although Dupont hasn’t seen much happen at Algonquin yet, she is certain someone has to be thinking about the campuses unique potential to get in on youthful art the students can interact with on a daily basis.

“We have to evolve as artists and art administrators to look at art and how art is consumed and how it is shown to people and students are a really good way when you tap into that to figure out how its done,” said Dupont.

In addition to these new campus projects, the cities public art program has been in the process of renewing its policy to reevaluate how they can engage communities. It is set to be released in November.

“I think Ottawa is poised right now to become a way cooler city than it has been the past,” said Dupont.

Boisvenue definitely feels there are a group of young people working to insure this happens, to bridge the disconnect between the artist community and city officials.

Bringing people together who would not normally interact, over art is a powerful way to build the local community. The interest in this is certainly growing, just check out any Instagram account, or any variation of the urban/art/Ottawa hashtag… they help to share the experience of art in the city.