Worried uOttawa students took to Facebook and Reddit to share their concerns about the Citizens Commission on Human Rights being on their campus on Tuesday, Jan. 28.

According to the CCHR website, the organization was founded by the Church of Scientology and a professor of psychiatry. Their website says that they act as a mental health “watchdog”. They take a stance against the biological/drug model of disease which is providing medication to people, that is “promoted by psychiatric and pharmaceutical groups as a way to sell drugs”. 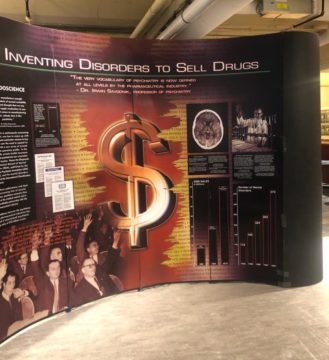 A photo of the installation by CCHR. Photo credit: Tim Gulliver

“It made me very upset, very angry,” says Gulliver. “It destroyed the kind of positive culture that we have to build on university campuses.”

CCHR’s pop-up exhibit had posters, slides and other graphic installations to present their organization’s beliefs.

“It’s very prominent and it’s very graphic,” says Gulliver. “There are pictures of dead bodies of the holocaust…and graphic imagery. People shouldn’t have to be exposed to that on campus.” 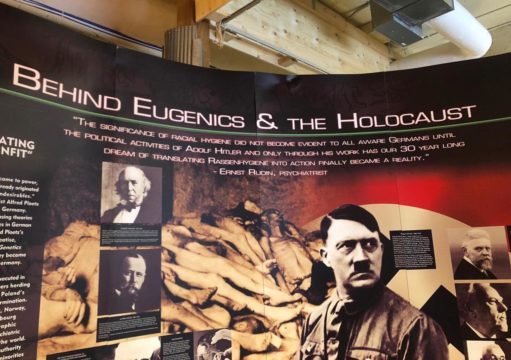 A photo of the installation by CCHR. Photo credit: Tim Gulliver

Gulliver shared that there were a few protestors on campus today and the number might grow in the next few days because there are students such as himself who do not support CCHR or Scientologists.

Later during the day, the organization came to the attention of uOttawa’s president, Jacques Fremont, who made his way down to the Jock Turcot University Centre.

“The president of the university came down and said that he completely disagreed, and that the university did not know this was happening,” says Guliver.

Students such as a Gulliver are concerned this is not the environment that should be created on a university’s campus. Rather than promoting a supportive and positive atmosphere, he feels it is the opposite.

“Especially with the pressures of life, as an adult, as university students, we need support, we need funding, we need to be able to grow and succeed, and this goes against all of that,” says Gulliver. “It goes against everything that the university should be standing for.”

Gulliver along with other students at uOttawa organized a peaceful protest yesterday from 1 to 7 p.m. to express their concerns.

“Please drop by in between classes and make yourself heard – it will be less scary fighting them alone, and will send a powerful signal to students that this kind of anti-mental health rhetoric does not have its place at uOttawa!” Gulliver stated in a recent Facebook post.