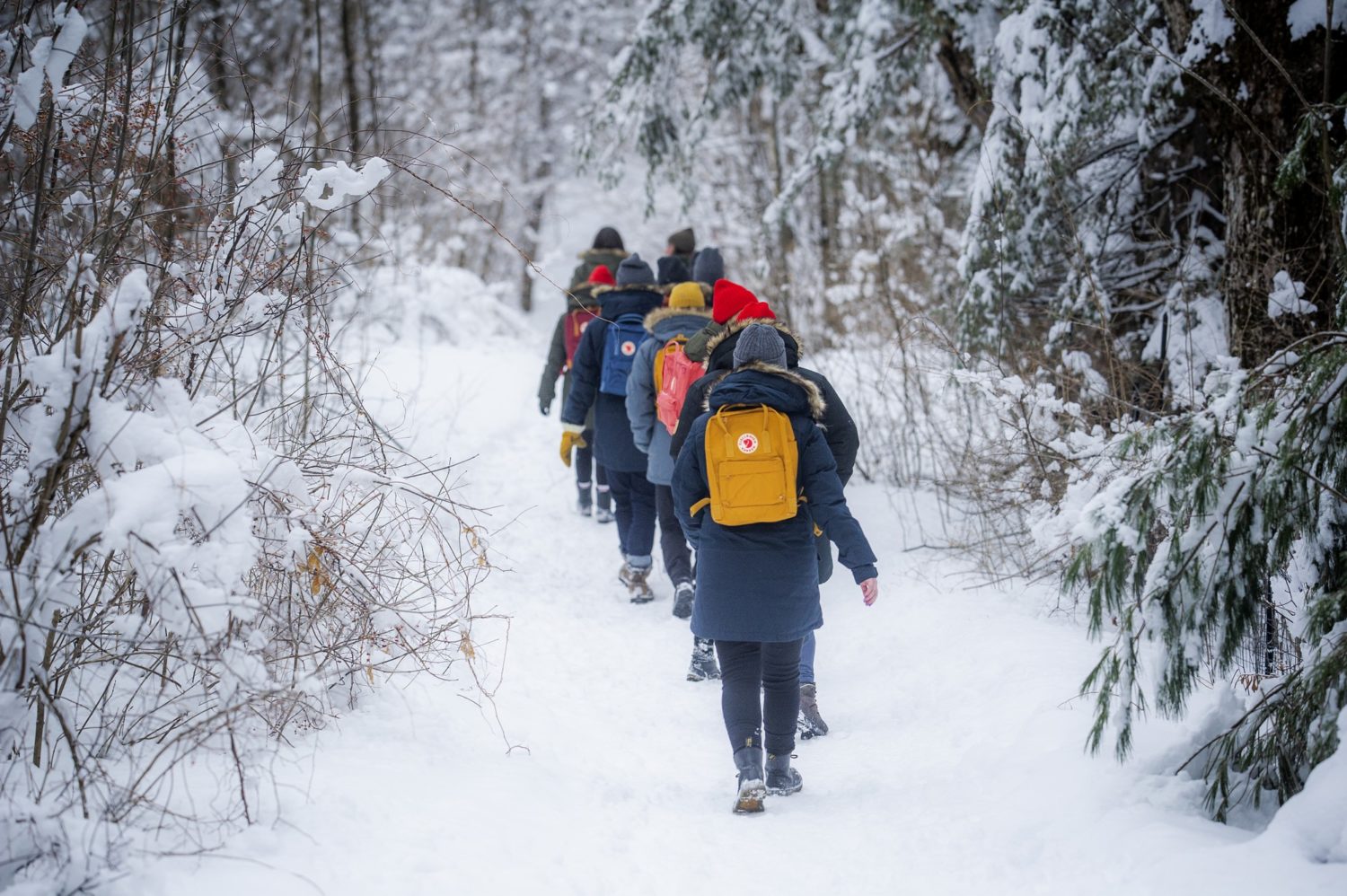 The 12 hikers walking through the path of Mackenzie King Estate. The event was to embrace the cold with the new Westboro Fjallraven store's parkas.
Photo by:

The snow crunched under my feet as I trekked through the snowy hills of Mackenzie King Estate. Normally on a January morning it would be cold, but sun rays and a navy blue Singi Down Jacket kept me warm throughout the hike.

The day began in Fjällräven’s Westboro store. It started with a light breakfast of fresh fruit and hot coffee and a product knowledge seminar on their parkas and outerwear care. It was their parka launch, so they decked out the hikers in their Fjällräven gear and then went for a photoshoot in the snowy Gatineau hills which included Ottawa influencers such a Andrew Szeto, Katie Hession, Dr. Mary M and Roland Bast.

Fjällräven and Rock-It Promotions came together to let the nature lovers use the parkas in the Canadian cold on a hike while getting some cool hiking tips along the way. 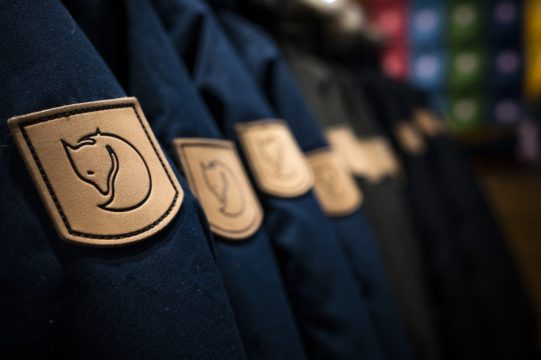 Photographs from the Fj�llr�ven Parka Hike Tuesday, Jan. 28, 2020 starting at the Ottawa Fj�llr�ven store followed with a hike in Gatineau Park.

The Westboro store is the first in Ottawa and opened in the beginning of July 2019. The company, though, has been around for exactly 60 years and was launched in Sweden by Åke Nordin.

You can find their fox logo on all of their products, since Fjällräven means “Arctic fox” in Swedish.

Nordin started making his products after he was disappointed with how uncomfortable the backpacks were – so he designed his own. The Kånken backpacks became their best-selling product and increased in popularity last summer when the Kånken became the unofficial “VSCO girl backpack”. 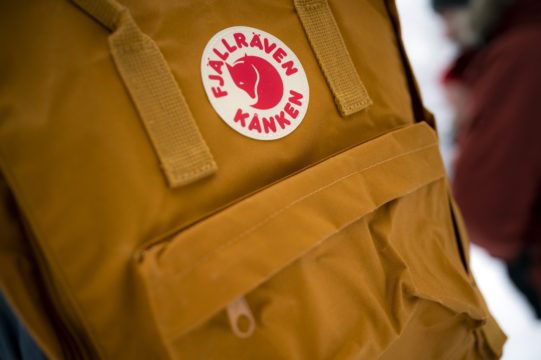 Fjällräven’s most popular Kanken backpack. This was made to help Swedish schoolchildren’s back problems

Not only is Fjällräven known for their Kånken bags, they are also well known for their parkas. The insulation selection of the parkas varies from synthetic to natural. For synthetic they sell Nuuk and for natural they have Wool Padded Parka, which is one that some people picked to wear for the hike.

“It’s a wool with a cornstarch synthetic insulation inside of it. Pretty much the whole parka is recyclable at the end of its life,” explained Tara Hamilton, manager of Fjällräven Westboro, about the Wool Padded Parka. 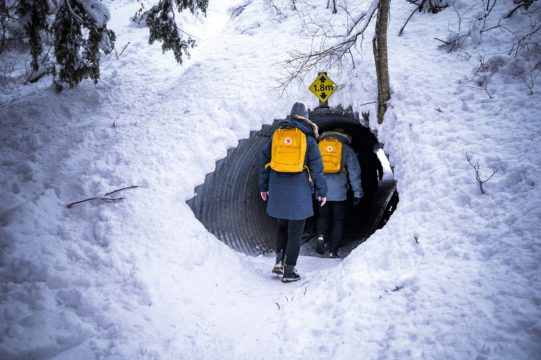 Fjällräven bags spotted while through the hike. The tunnel leads to a steep hill towards the waterfall.

Their jackets are made out of G-1000 (a material that is 65 per cent polyester and 35 per cent cotton) which allows for great ventilation and water resistance. The hikers were allowed to have their choice of jacket, the one that most people picked was the Singi Down Jacket W that includes 600 fill goose down.

There was also a demonstration for how to keep your jacket long-lasting. Bees wax should be put on the shoulders, hood and bottom part of the parka. The wax increases the durability of the garment and also makes it more resistant to rain and wind.

“If you actually have a jacket that’s going to keep you warm, that’s comfortable, that inspires you to get outside because you want to have it on, then I think that’s a big part of it [a good jacket],” says Hamilton.

The snowy hike was led by local hiking experts, Mary Anne Ivison and Vicky Castledine, who run the account HikeAddicts.

They guided everyone throughout the Mackenzie King Estate trail and stopped to talk about key points, such as the cottage-museums that open during the summertime and the ghost tours during the fall. 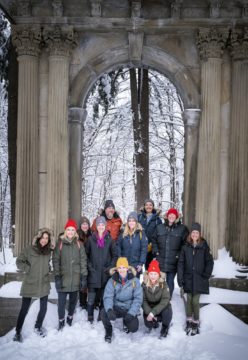 Everyone posed together in front of the arches. The group consisted of photographers, bloggers and influencers.

“[Primer Minister William Lyon] Mackenzie King actually did seances with his dead mother on this property,” says Ivison. “He was very into the supernatural by the way.”

She also explained that the ruins were built by Mackenzie King from different pieces he collected from the Canadian Parliament Buildings, when it burnt down in 1916, and from the British Houses of Parliament, when they were renovated.

“He somehow got them over here and built the beautiful ruins so we’re gonna go see those,” Ivison says. “But he built all of this for Canadian citizens to enjoy and he was a really big component of beautifying nature and bringing it together and wanting people to enjoy it for generations.”

The entire hike took around two hours, with the occasional stop to take photos. Someone who enjoyed the experience was avid hiker and social media influencer, Joey Kidney.

“I think just learning more about the company was kinda cool,” he says. “It wasn’t just like read facts. It’s like, ‘Okay this is how you’re gonna treat your jacket,’ and it was shown and explained as to why you need to do it and when you need to do it which is really cool. And then actually going to test it out was I think the best part.” 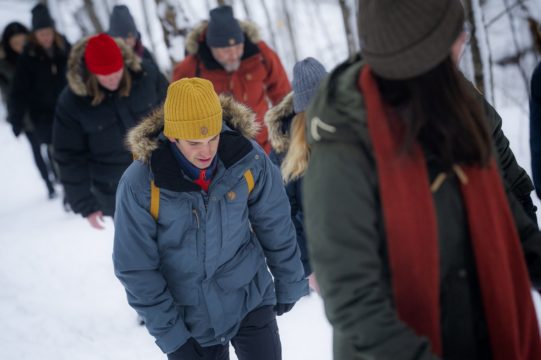 The group trekking the hills. The camera is focused on Youtuber, Joey Kidney.

Hiking in the wintertime has different rules than summer. It’s more dangerous because it’s slippery and it becomes darker earlier. Ivison says that being prepared is her best winter hiking tip.

Castledine says her best tip is to wear layers and lots of them.

“As soon as you start feeling warm – peel back a layer. Don’t wait until you’re sweaty and super uncomfortable because then it’s too late and you’re gonna get a chill. So as soon as you feel like your body is warming up – layer down.”