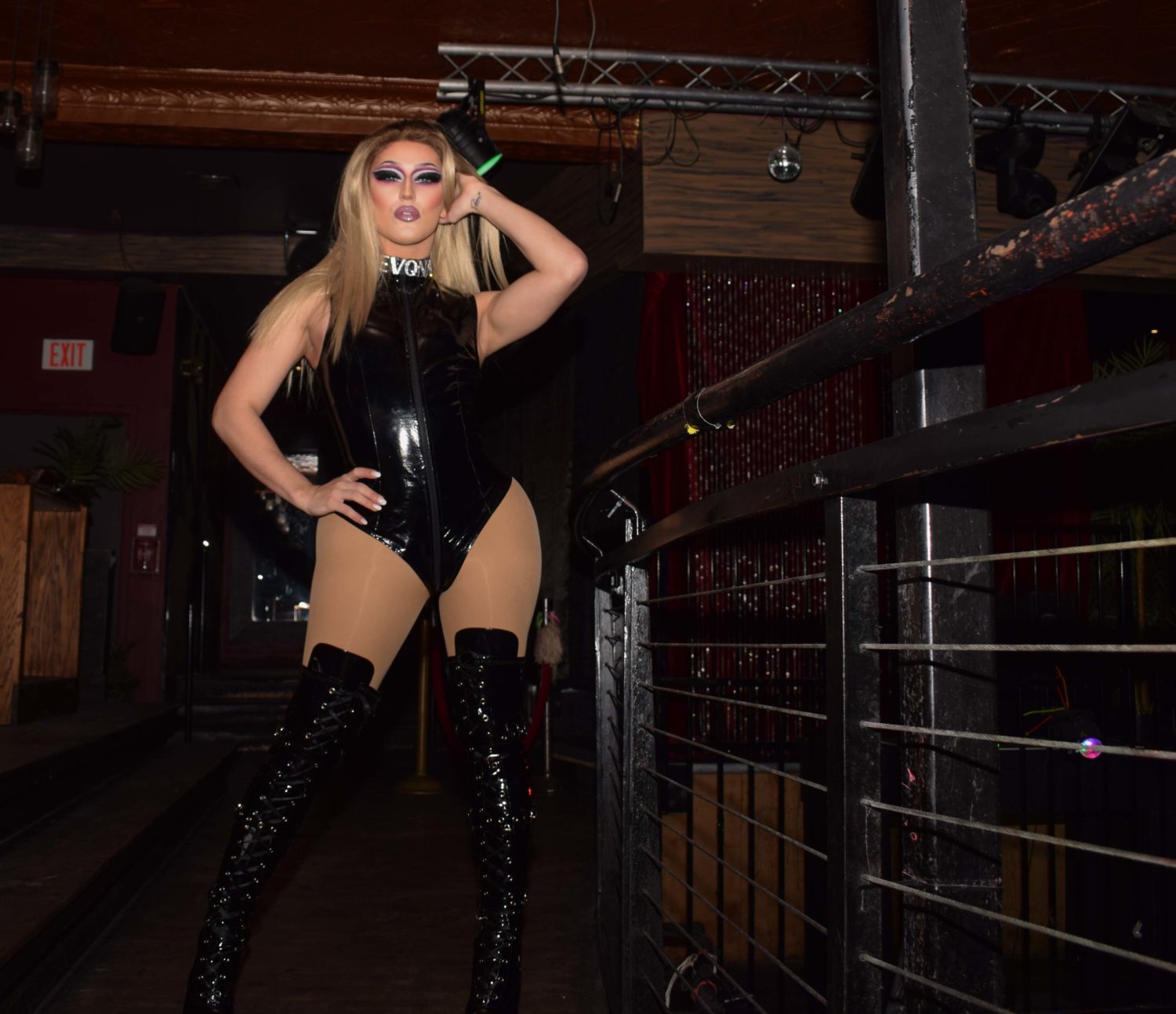 On a blue tray, her collection of makeup lies in little storage containers. She sits upright and looks into the face mirror that rests on her table. She grabs her thick brown dreadlocks and pulls them behind her head in preparation for her first step: setting the foundation to transform into a performer with charisma, nerve and talent.

Once the transformation is complete, Ace Aspie the drag king is ready to lip sync on stage for the audience.

When people think of the aesthetics of drag, RuPaul’s Drag Race might be the first thing that comes to mind.

If you’re a drag queen or drag king in Ottawa, a small stage with a dance-track backdrop and a supportive audience is all you need.

Now, add in the aspects of being a student: the constant reminders of financial struggles like paying bills on time, along with assignments, deadlines and bedtimes.

The life of an Ottawa drag queen is a job that requires time and energy, which consists of piecing together outfits as well as sacrificing time to perform at late hours of the nights. Some drag queens and kings have the ability to successfully balance their school life with drag, while others dip in and out, struggling to find a way to perform drag on a dime.

November 2017 was when Devona Coe first set foot on stage as a drag queen. She had never performed drag nor touched makeup before. Two years later, she is the host of Bourbon Room in downtown Ottawa and the drag queen that many look up to in the local drag community.

Coe is a 22-year-old advertising student at Algonquin College. She is one of the drag queens who is able to balance her schedule by using the fundamentals of her program to keep her drag and student life organized.

Aside from the Bourbon Room, she is also a host of the Vanitea Room in Centretown, preparing drag brunches and dinners for multiple occasions.

Her view of drag is different from the way other queens may perceive it.

“I look at drag as an art form and a business,” says Coe. “Whenever I organize an event, I look at all of those things as businesses in themselves. So, I use skills that I’ve learned in advertising to directly impact those aspects of [my] life.”

Celebrating her two-year anniversary of being a drag queen in Ottawa, she says the process wasn’t easy, but that the feedback she’s gotten from audiences has made it all worth it.

“That’s partly why I do drag now is because I see a difference in what I do,” says Coe. “I see teenagers following me and thanking me for making a difference in their lives and making them feel included.”

The drag performance spaces in Ottawa weren’t always so popular, however, according to Coe.

“When I started doing Bourbon Room, it was originally a straight club, and I brought up the idea of [it] becoming a gay club,” says Coe. “When we first started, there were like, 20 people in the club.”

The turnout for her weekly event now attracts about 60 people. The only other problem was creating a space for drag kings.

The difference between drag kings and drag queens is that kings appear in a variety of men’s clothing portraying different scales of masculinity. Whereas drag queens are typically men who exaggerate feminine qualities through makeup and costuming.

Drag queens already had a growing reputation but, according to Coe, drag kings were not always welcomed.

“Drag kings have existed for a long time and it’s just that you don’t see them as often because we’re not the ones that are going to be put on TV,” says Cameron Rose, a human rights and social justice student. “You’re not going to see a drag king unfortunately on RuPaul’s Drag Race and if that’s their only idea of what drag is, then [they’re] not going to understand what it means to be a king.”

Rose, who performs as Boy Vey, is a drag king who started performing in September 2019. After considering performing drag six months prior, she decided it was finally time to try it out.

“I’ve really just been enjoying myself, I just keep trying to take on new opportunities so that I can be a well-known performer in the community,” says Rose.

Though performing drag serves as a creative outlet for Rose, late-night shows are something that she has to work around.

“My first show that I ever did was at Swizzles Bar and the show didn’t start until 10:30 at night, which is ridiculous,” says Vey. “I’m lucky that I didn’t have class the next morning.”

Another student who works hard to transform into a drag king is 21-year-old University of Ottawa criminology student, Ace Aspie.

Aspie started doing drag in April 2019 and has a set idea of what she wants people to take away from her act.

“I want people to watch my drag and think, ‘Hey, this is somebody who’s doing male drag, but who isn’t necessarily conforming to a gender binary,’” says Aspie.

Because she’s a student and performs drag twice a month, money is always an issue. Finding ways to reuse makeup or invest in reusable costumes are ways she becomes cost-effective. Some makeup she says has been with her for a long time, such as her Kylie Jenner eye shadow collection.

“I’ve definitely been using most of this makeup since high school because my mom bought it for me when I was going to prom,” says Aspie. Reusing makeup is the best option since buying new makeup is so costly.

She says that drag kings are not held to the same standards as drag queens.

Aspie said if criticism toward drag kings is not directed at their clothing, it’s directed at their aesthetics. Though she is new to the drag community and still trying to find her style, the main critique directed at her so far has been her makeup.

“I always get critiqued on my harsh contour and people can go fuck themselves because that’s the point,” she says.

She decided that she would do her own thing rather than being turned off by the pre-conceived idea of what a drag king actually is. She doesn’t care what people think of her style.

Scheduling drag with school and work can be a conflict for Aspie as she often envies other drag queens who have fewer time restraints.

When Aspie is not in drag, she works at the Writing Centre at uOttawa and volunteers at the Pre-Law Society, all while working with Innocence Ottawa (where they review wrongful convictions). So trying to perform for the 11 p.m. shows at drag venues is sometimes a struggle.

Regardless, she knows that performing as a drag king is a way to show audiences that not all drag kings are the same.

Aspie, along with the other drag performers, hopes that with the increase of inclusive spaces, there will be more incentive to join the drag community in Ottawa.

“I’ve always promoted inclusivity and tried to bring drag kings into my shows and making sure that I’m making a space for everyone,” says Coe.