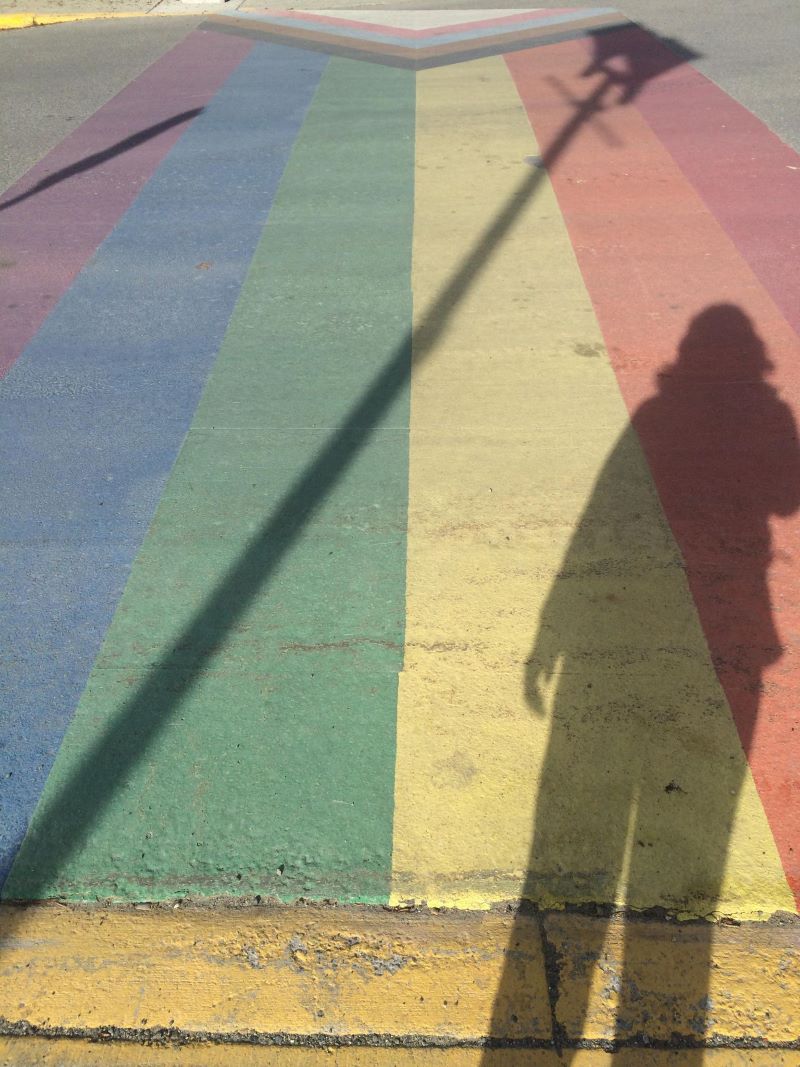 A silhouette of Magan Carty in summer 2022, happy and healthy at a Pride crosswalk in Whitehorse, YT.
Photo by: Magan Carty

I am 18 when I say goodbye to my family and dog to fly across the country and live on my own for the first time. I’ve been accepted into one of Canada’s top theatre schools.

It’s January 2011 and Vancouver is gray, wet and making me feel like anything is possible. The mountains have yet to make an appearance from beneath the thick misty clouds, but I already love it here. I am 4,727 km away from home and ready to do whatever it takes to “make it” as an actor.

Drinking age in B.C. is 19. Most of my classmates are already well into their 20s. I am the baby of the group – the only one who needs a fake ID to go out.

I use the old driver’s licence of a girl in my program. It’s expired, but she tells me it doesn’t matter. We’re both from Ontario. I study her birthday and parents’ address in case I’m ever tested. At school, I am 18 and my name is Megan Carty. But out in the world, I am 27 and my name is Stephanie Izsak. Pretending to be someone else comes more naturally to me than being myself. Performing is what I do, and acting is why I am here.

I present this ID to a bouncer for the first time at 917 Main St. while entering a venue known as The Cobalt. Rae, my closest friend from school, and I are attending Vancouver’s popular monthly drag-king show known as Man-Up.

In addition to dragging me to queer events all over the city, Rae introduces me to a new language. For the first time, I hear words like “cisgender” and “non-binary.” My vocabulary expands. I start to understand myself and the world around me a little better.

Language is such an important and powerful tool. It can completely shape one’s personal identity. It’s extremely challenging to understand who you are or what you are going through without the words or phrases to describe it.

I’d been called a “young lady” before, a “tomboy,” a “girly girl,” a “tank,” a “woman,” and a “girlfriend,” but I never felt like any of those things. I wish terms like “genderqueer,” “gender variant” or “gender fluid” appeared in textbooks at school or in conversations at home.

Growing up and stumbling through puberty, I was never given the language I needed to explain my experience, so I couldn’t comprehend what I was going through. It didn’t exist in mainstream culture. I had never even heard of a gay person until Finding Nemo came out in 2003 and my mom and aunt were talking about how the character Dory was voiced by a “lesbian.” I was 12. It was the first time I heard of a same-sex relationship.

The same goes for gender. The World Health Organization (WHO) describes sex as characteristics that are biologically defined, whereas gender is based on socially constructed features. I always understood “sex” and “gender” to be interchangeable, but they are completely different concepts. Sex is biological. It’s a label that goes on your birth certificate–male or female–assigned by a doctor based on the genitals and chromosomes you’re born with. Gender, however, is much more complex.

My birth certificate says “female.” Because of this, I am expected to act in a certain way that aligns with society’s definition of a “girl.”

Rae is the first person to explain the concept of gender identity to me.

There are other ways to address someone than she/her and he/him I learn as well. Some people, like Rae, use they/them pronouns. Until now, I never knew gender-neutral was something you were allowed to be.

“Gender isn’t real,” they tell me. “It’s a performance of who society tells us to be based on what’s in our pants.”

This makes so much sense to me. I feel seen.

Ever since puberty, I didn’t feel right but I didn’t know why. I was different and I didn’t like it. I coped with the sudden onset of breasts and a period by starving them away. I didn’t want to be a “boy,” but I wasn’t comfortable as a “woman.”

Before I met Rae, I assumed there was something fundamentally wrong with me. They help me realize I’m not broken; I’m just different. I am not cisgender in a world that wants me to be. Neither are they. And knowing I’m not alone makes my experience valid and real.

Rae orders me my first chest compression binder and we both test it out in the bathroom at a party. It’s a super-tight black undershirt that makes my chest flat and androgynous. I immediately feel more comfortable. I wear it every day, even though it gives me back cramps and makes my breathing shallow.

I try on a different set of pronouns and ask people at school to call me Morgan instead of Megan. I cut off most of my hair and start shopping in the men’s section.

I feel more awake, alive and myself than I have since I was a kid.

Act III: “I need to know what you are”

A harsh lesson awaits me: Just because I am ready to embrace my genderqueer identity, doesn’t mean the people who hold power in my life are.

It’s December 2011 and the end of my “B-term” at theatre school. The then artistic director sits me down in her office for a “talk.” I did not pass acting, she tells me. I am being asked to take a term off from the program because I’m having an identity crisis and she “doesn’t know how to cast me.”

I feel bludgeoned. I want to scream but instead say nothing.

I feel like I am going to throw up. I can’t even think.

Ivan Coyote–trans activist and author of my bible, Gender Failure–said it better than I knew how to at that moment: “I am not trapped in the wrong body; I am trapped in a world that makes very little space for bodies like mine.”

Something breaks in me. As I exit the artistic director’s office, crippled by debilitating shame, everything around me turns foggy and slow motion. The blatant transphobia of the woman I’ve been conditioned to idolize pierces so deep I vow to suppress my truth from then on.

Degraded and humiliated, I move back home with my parents in Ottawa. I take back my old name and work hard to forget about the person inside I found in Vancouver. I want to be an actor more than anything and if this means performing a gender I am not, then so be it. I will never share my truth again, not even with myself.

I am 19 now, so I don’t need a fake ID anymore. Still, my real ID doesn’t feel right. I am playing the role of someone else, keeping the best parts of myself hidden and making my truth invisible for the sake of my career. I envy those who can wear their queerness on their sleeve and be seen as who they really are.

I get acting work though. Lots of it. I perform out of every Canadian province, always portraying the lives of cisgender and straight girls and women. I fool them all, even myself. But stretching the distance between who I am and how others perceive me is making me sick.

People who don’t feel like themselves or comfortable in their own skin might rely on suicide to get out of their circumstances. I never tried to kill myself, but spent many years in and out of hospital for the treatment of anorexia nervosa. I stopped eating to achieve the flat-chested, androgynous look I desired, and it took 13 years for my diagnosis and treatment plan to shift from body dysmorphia to dysphoria. 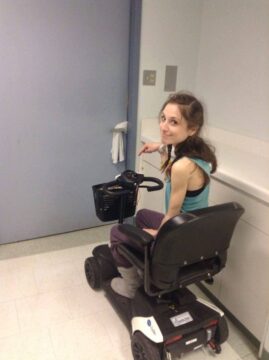 At age 27 (for real this time), my act catches up with me. I can’t stand the thought of continuing to perform my life for other people. I stop hiding from myself–finally–and seek the resources I need to pursue gender-confirmation treatment. My therapist refers me to the 2SLGBTQIA+ & Trans Health Program at the Centretown Community Health Centre.

It takes a long time. You don’t think about this when you make the commitment to stop performing and transition. Getting treatment from medically qualified professionals can take months, or even years for some services, even though gender-affirming interventions are defined as medically necessary by the World Professional Organization for Transgender Health (WPATH).

Medically assisted gender confirmation has the power to significantly improve the quality of life for people experiencing discomfort or distress with their sex. Funding is scarce and waitlists are long, but treatment can be lifesaving.

Living inside a body I want to hide from means there are certain services I need, including:

It is tough to ask for what you need as a non-binary person whose biological sex doesn’t match their gender identity, and even tougher to access it. A lot of people don’t understand. But in January 2020, I finally come out (for real this time) and start running towards the life I want for myself. I don’t ask for anyone’s permission.

It’s Aug. 23, 2021, and I have just turned 29 when I change the spelling of my name on all social media and add my pronouns (they/them) to every email signature. I am Magan now (or Mag for short). It’s only a one-letter difference, but if anyone in my family or circle of friends has a problem with this, they can’t say anything because it’s my birthday.

It feels important to mark my commitment to change in a significant way. By letting go of Megan, I am letting go of the fear and self-loathing that came with staying in the closet for so long just to keep others comfortable. I am allowing myself to surrender to a change I know is good for me.

Transitioning can be extremely confusing and disorienting sometimes. I don’t have very many non-binary transgender role models to look up to or ask questions. And I’m afraid to talk about it too much because I don’t want anyone to try talking me out of it.

All I know is if I don’t let myself transition, I’ll always be hiding from who I am meant to be. I’ll never feel like I am in the right place. I’ll sit next to the ones I love, feeling restless because they don’t know me. I’ll only feel myself when I’m alone, and that’s not okay. I am only human, so no more performing.

There is only the truth. And the truth is: I am tired of hiding and lying by omission. I deserve to feel more comfortable and at home in my body. I know what I need to do to recover from an 18-year battle with gender dysphoria.

Medically transitioning female to non-binary is a gift I am giving my future self so I can feel still and quiet, deep inside.

I am finally catching up to the human I am supposed to be. And they don’t want to act anymore. Or pretend to be someone they’re not.

They want to write.

And focus on being their own kind of person. 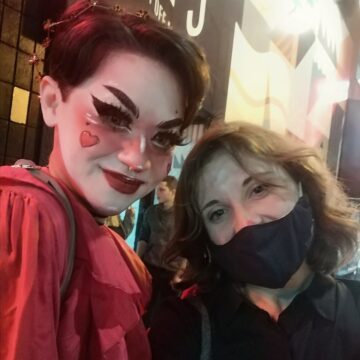 Rae and I 10 years post-theatre school. This selfie was taken after one of their drag performances in summer 2021. Photo credit: Magan Carty