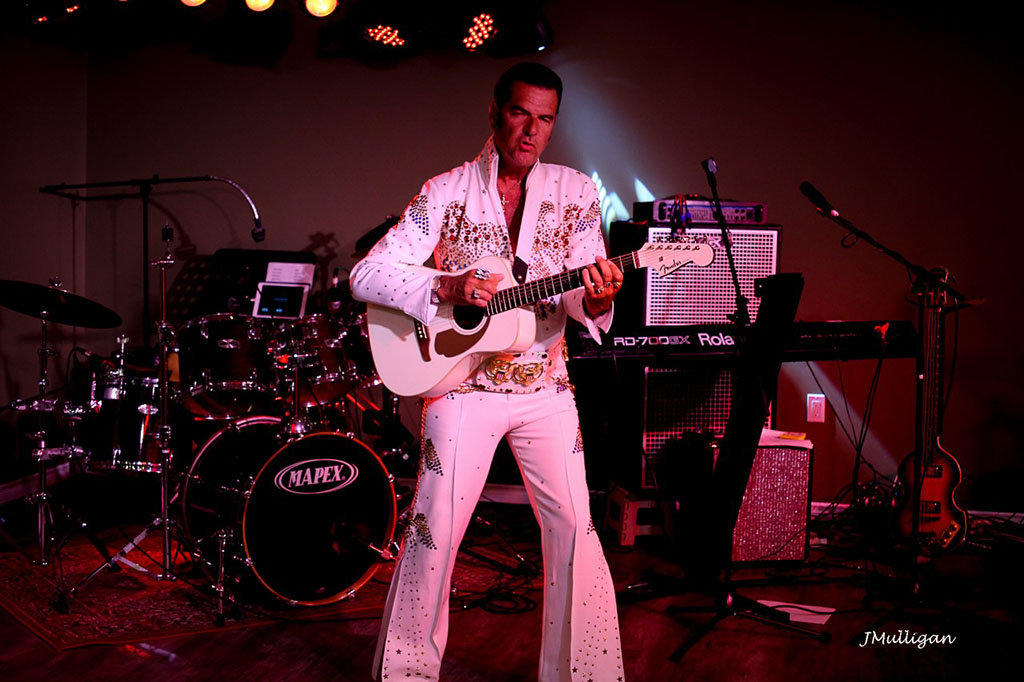 “It wasn’t at all planned,” Paul Anthony told me as he looked steadily across the table of the bustling Ottawa diner where we had scheduled to meet. With a sly, infectious smile, and jet-black hair cresting into a pair of grandiose sideburns, he certainly looked as though he was destined to impersonate one of the world’s most culturally ubiquitous figures. And yet, through his humble mannerisms and warm sociability, Anthony insisted his current career as an Elvis impersonator was strictly coincidental.

“I grew up when new wave and punk rock was coming in,” Anthony, now 58, recalled with a smile. A teenager growing up in North London, U.K., with a wide range of musical tastes and an ever-burgeoning lexicon of musical genres to enjoy, Anthony was nonetheless drawn to the high-octane rock and roll that his mother and older family friends loved. Among the cornucopia of musical acts Anthony embraced from the ’50s and ’60s, Elvis was always one of his favourites.

Appreciating music to the extent he did, he soon started singing and put a band together to perform at school. While he dabbled with various instruments throughout his youth – notably piano and guitar – singing was always his musical passion and the primary means through which he reveled in performing for an audience.

This love of performing would follow him through to adulthood. Alongside a successful career in tech, Anthony spent much of his time singing in a show band that played throughout his home country of the U.K. Entertaining audiences with musical staples from the 50s and 60s, Anthony was an engaged performer until he immigrated to Canada in 1998. He now lives in Ottawa.

The diner’s server approached the table and asked us how our meals were. “Lovely, thank you,” Anthony reported with his characteristic smile and smooth, slightly Canadianized British accent. We both agreed to more strong diner coffee, and Anthony described the circumstances that had led him down the impersonation path he now finds himself on. Driving home from work one night, he spotted karaoke being advertised at a local bar. His wife was out of town, and, missing the thrill of performing he had once enjoyed, he decided he’d make his way to the bar and sing a few songs.

At the end of the night, the woman who ran the karaoke approached him. Perhaps sensing his zeal for entertaining, she asked him if he would be interested in hosting a karaoke out of another Ottawa bar as the regular host had recently quit. Reluctantly, he agreed to take the reins for a month or so until she was able to find someone else. “I ended up doing it for 18 months because I enjoyed it so much,” Anthony beamed.

“Occasionally while people are arriving,” Anthony explained, “you have to get up and start it off.” As a longtime Elvis fan, he would occasionally perform one of Elvis’s songs to break the ice and get the crowd into it. On one occasion, an older couple who happened to be huge Elvis fans themselves approached him at the end of the set. Seeing an adept performer with reverence for the source material, they suggested he put on an Elvis show. “I just kind of shrugged my shoulders,” he said. “We have a friend who makes genuine Elvis costumes, and she lives right around the corner.”

Soon Anthony was fully outfitted with a swanky, bedazzled handmade costume and en route to his first Elvis performance. The word-of-mouth nature of the for-hire impersonator business means that anyone with skill will quickly get noticed and be steadily booked. Such was the case with Anthony. After a few short years in the impersonating trenches, he retired from his tech job and had devoted himself to the craft of Elvis impersonation. Consistently booked for an average of three shows per week, Anthony is able to make a comfortable living when pairing this income with his previous tech job pension.

Those who know Anthony aren’t surprised at how popular his act is. “He just sounds exactly like him,” Dai Bassett, a long-time friend and fellow musician of Anthony told me. He’s not lying – the resemblance is uncanny. Able to seamlessly embody Elvis’s passionate baritone deliveries with his unmistakable cadence, Anthony delivers an impersonation that is enlivening to witness. No matter the era in Elvis’s discography, Anthony’s command of vocal nuances is remarkable.

For those who can personify the individual they are impersonating, reactions from the audience can be humbling. “I’ve had occasions where someone will be enjoying it and smiling through all the songs and suddenly will be in tears. Only later will you find out that the song you were singing was a special one for them and their husband, and their husband passed away last year.”

Anthony explained how the idiosyncrasies of paying tribute to an established performer demand that you do not take the same liberties as someone performing a cover might. “I don’t take it as far as some guys do,” he emphasized, making the distinction between himself and those who watch every one of Elvis’s concerts and attempt to replicate his every body movement. “I’m trying to pay tribute – not to completely imitate him in that way.”

The growth in his performance craft that he is most proud of is his showmanship. Elvis’s enduring cult of personality was not built solely on his voice. His penchant for grabbing a crowd’s attention and holding it was as much a factor in his lasting predominance in popular culture as his singing ability. “You can sing really well, but if you don’t move or do something interesting, you’re going to be boring to a lot of people,” said Anthony.

While Anthony says the majority of his impersonator gigs are within the Greater Ottawa area, he also frequently travels to Montreal, Kingston and other towns and villages in the region. As is expected, the primary age range he performs for are those between 60 and 70 – people who grew up with Elvis’s music. Surprisingly however, the gigs he is booked for are by no means exclusive to this demographic. It is not unheard of for him to perform at a wedding for a couple in their 30s or a birthday party for someone in their 90s. Young or old, urban or rural, lifelong rock and roll fan or not, people from all walks of life seemingly relish the chance to experience cultural figures from bygone era’s being reincarnated before their eyes.

Having finished our meals, I thanked him for his time and returned to my car. Driving home along the maze of intermittent one-way streets that make up Ottawa’s downtown core, I found myself ruminating on the sheer number of gigs Anthony was being booked for weekly. I was amazed by such a high demand for impersonation of a culture figure who died over 40 years ago, and found myself pondering Elvis’s lasting popular culture relevance.

To this day, Elvis is omnipresent in contemporary popular culture. Even those who would be unable to name a single song of his would likely recognize his flamboyant imagery. Many of the contemporary tropes we as a society associate with the “rockstar lifestyle” can be traced back in some capacity to Elvis. His enduring legacy as an iconic 20th-century musician is undeniable.

The reasons for Elvis’s persistent cultural prevalence are unclear and hotly debated: Was it his association with early 20th-century youth culture? His co-option and introduction of African American music into the societal mainstream? His outstanding singing voice paired with his classic good looks? It’s difficult to say. What is clear however is that, as Paul Anthony himself suggests, “the people doing the impersonations have, to a certain extent, helped keep it alive.” Anthony continues to do his part in honouring “the King” and keeping his (and Anthony’s) many fans happy.