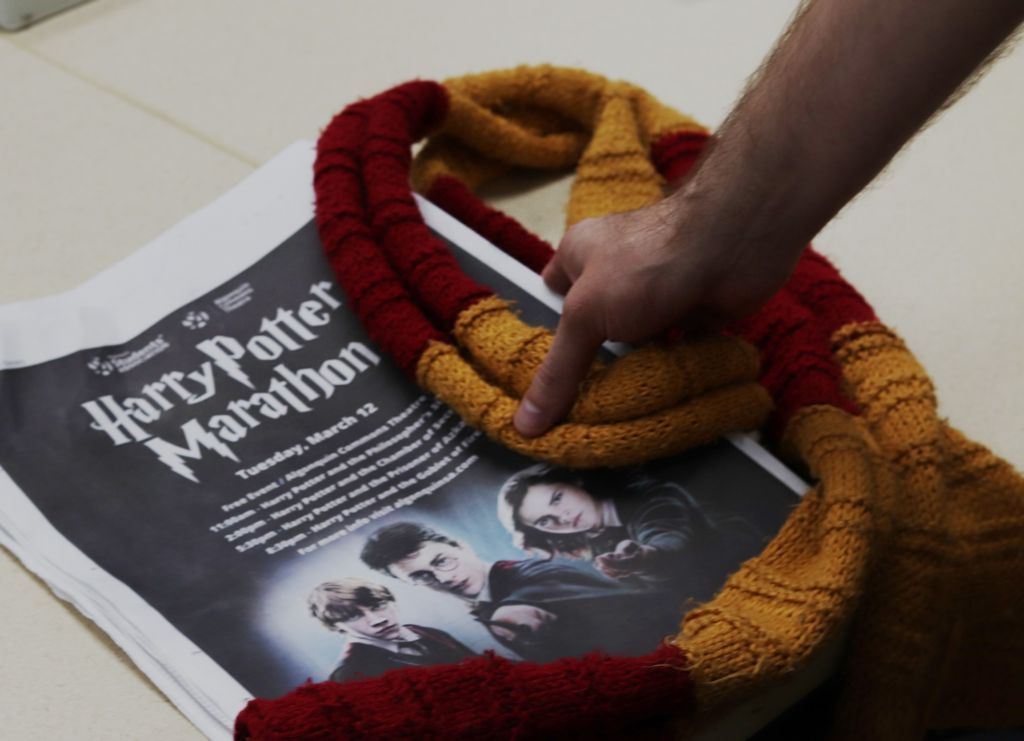 On March 14, Algonquin College’s Student Commons Theatre gave Harry Potter fans an ultimate fix of their favourite franchise by hosting a movie marathon. Some may say, it was a magical evening.

Although it’s been 18 years since The Philosophers Stone first hit theatres, the movie and the series that followed is a multi-million-dollar franchise that is still relevant to this day. Fans of this franchise are more than willing to give up an entire day to binge watch all of the Harry Potter movies.

So why did some students spend between 10 a.m. to 11 p.m – with exception to bathroom breaks – committed to the story of”the boy who lived”?

Charlie Prieto Ledesma, 26, second-year general arts and science student, has been a fan of the films his entire life. Despite living a large portion of his life in Mexico City, he is still very well-versed with the franchise. He considers himself a true fan.

“I believe it’s still relevant because the fanbase the franchise possessed a huge fan base before the films were released,” says Prieto. “For one, those books captivated an entire generation, so from that, you have a massive amount of people who still get that feeling of nostalgia when they watch it.”

While Prieto believes it stems from the desire already being there, he also believes that it is the fault of the author for continuing to feed the desires of her fans.

“The writer insists on continuing the stories in way of other character development, which ultimately results in the depth we see in the characters and situations they are put through,” says Prieto.

Julian Llieda, 30, first-year medical radiation technology student at Algonquin College, believes that there is an element of childhood attachment to the characters.

“Honestly, I think it’s because of the medium they’re delivered in. Because there are people who aren’t necessarily interested in reading the books can instead enjoy the films,” says Llieda. “It’s especially nostalgic for people who grew up with the books. Each book came out a year after the previous so fans felt like they were growing up with the characters.”

First-year office administration student, Amanda Moore, 28, believes that the film franchise offers something more to those people who struggle with reading lengthy books.

“I think the movies are still relevant because it appeals to those people who either have difficulties reading or suffer from dyslexia,” says Moore. “My sister has dyslexia, but she is a huge Harry Potter fan. She wasn’t able to read them as a kid but because of the movies she could still take in the concepts and lore that exist in the universe of Harry Potter.”