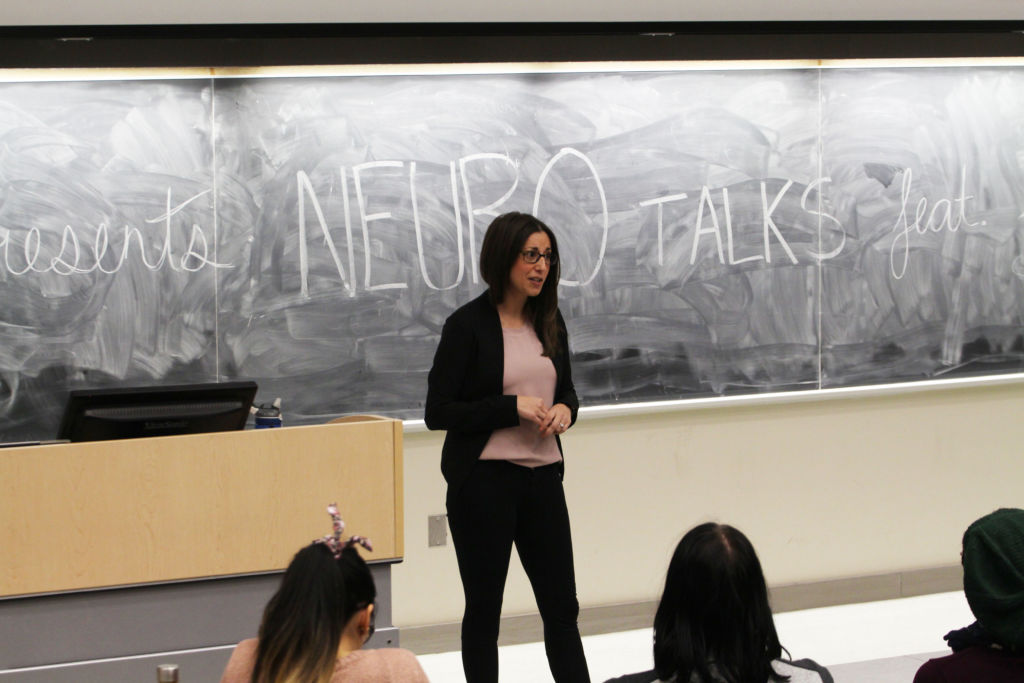 Over 20 young women gathered in the Azrieli Theatre at Carleton University on Feb. 7 to listen to Dr. Brianne Patterson, who completed her PhD in Neuroscience at Carleton, discuss her career path and experience as a woman in science.

Over the past 15 years, many women around the world have made continuous efforts in fighting for equality, inspiring, encouraging and engaging women and girls in science.

Some believe that personal biases and gender stereotypes have been steering girls and women away from science-related fields. So on Dec. 22, 2015, the General Assembly established Feb. 11 as International Day of Women and Girls in Science to recognize the important role women and girls play in science and technology.

“Medicine is amazing,” says Dr. Patterson. “It’s one of those fields where you get to interact with people, but you also get to do research, you get to be a part of people’s lives, you get to save lives. I couldn’t imagine doing anything else.”

Patterson is in her fifth year of the joint MD-MBA program at McGill University.

“I think it’s very important as women and as men to support women in these fields,” she says. “I think as women we have a responsibility to one another to power and encourage each other.”

She explains that to help empower and encourage women, she and some of her medical school colleagues at McGill had started a chapter for the Association for Women Surgeons (AWS).

“AWS is this international organization that focuses on empowering, encouraging and providing mentorship for females in medicine with an emphasis on those pursuing surgical disciplines,” she explains. “We are in our third year now [of the initiative] and I guess over the course of the last three years we have had maybe 15 female surgeons come in and give talks.”

During her discussion, Patterson brings up three important points every student should know before entering medical school and hopes it will inform and encourage students to participate in the field despite some negatives.

“Med school is expensive and that may sound super obvious but there are a lot of kind of hidden expenses you don’t really find out about until you’re in the program,” she says. “On average med school tuition across Canada is roughly $16,000 to $17,000 a year.”

Patterson says that not only is tuition expensive but students still need to purchase tools such as a stethoscope, reflex hammer, white coat, books, and anatomy supplies.

2. You don’t really have control over your schedule:

Patterson says that on average students can be working two out of four weekends as well as doing late shifts during the week during their core rotations.

“You don’t really have any control over this which makes it difficult to make plans, attend events and it can be hard to have a social life [but you] just have to accept that it is the way it is,” she says.

3. You don’t necessarily get to be the kind of doctor you want to be:

“A lot of people start medical school and they want to be a cardiac surgeon or a neurosurgeon and that’s great and if that’s what you want to do you gotta go for it but residency is an application process,” she explains. “There are more applicants than there are positions.”

Patterson explains she loves medicine and the purpose of her discussion is to let students know about the reality of it.