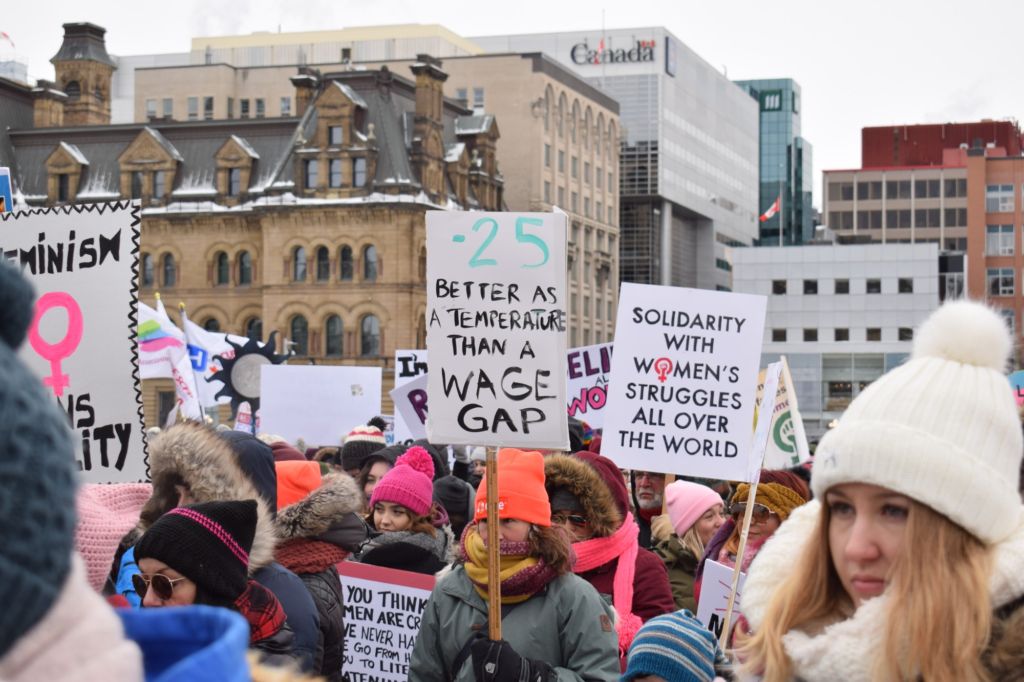 It was by far the coldest day of winter — below -25 with the windchill pushing it past -30. When I arrived on Parliament Hill I was taken aback by how many people were already gathered. Some were near the eternal flame staying warm but most had moved closer to the speakers who were just atop the steps in front of the Peace Tower. What struck me immediately was the sense of community and the eager smiles between participants. Each and every participant was motivated.

After the opening speeches had been completed, it was time for the march to leave Parliament Hill and head to Lansdowne Park and the Aberdeen Pavilion.

Their drums like a heartbeat, a group of Indigenous women led the way. The protest consisted of hundreds of marchers was predominantly women, but there were many proud men who joined them. Some were fathers who carried signs supporting their daughters and wives. Others were far younger and embraced these injustices as their own.

When you read through the signs and listened to the women marching there was a long list of concerns identified. Some quite obviously addressing the pay gap between men and women. Others left me feeling a small bit of shame as I was unaware – or perhaps just ignorant – of the obvious injustice they came to speak out against. In this case, it was a sign that pointed out the abuse encountered by nurses on a daily basis, a fact that seemed painfully obvious when the words registered.

“Equality is my right, I should not have to fight!”

From the moment they left the hill, supporters either joined the march or cheered their support. Jeff Leiper, councillor for Kitchissippi ward, was seen along the first few blocks of the march waving to marchers.

“The people, united, will never be defeated!”

As organizers prepared for marches across Canada and the U.S. over the weekend, a major storyline was out of New York City. There were two separate marches planned. Ideological divides among organizers led to a split that dominated discussions in major publications like the New York Times. In Ottawa, that didn’t seem to be a problem. There were calls to support Muslim women, the wage gap, nurses and Palestinians.

As cold as it was the weather seemed not to bother anyone, this was a focused and driven group of united individuals. As some women left the march others asked to carry their signs, a symbolic show of support for their fellow protesters.

As the discussion continues and the march is over the question becomes, ‘what do we do next?’ For women, they keep living their lives looking for solutions to their injustices. Their fight is not over.

So how can men participate now that the march is over? Can men have an impact in their daily lives? The answer is yes.

Men can help in their daily lives in many different ways. The most common response to the question was simple:

Women want an equal opportunity to be heard. Giving space to all voices is critical. Once that space is given and ideas are shared you need to engage responsibly. That can manifest as a simple discussion that can lead to an obvious solution, often leaving everyone feeling fulfilled and proud that they can make a difference.

It can be far more complicated and there may be no easy solution. But if you engage in these discussions and accept that what works for one individual may not work for another you can begin to build toward a solution. It may require changes that are an inconvenience to you, but by engaging and accepting changes you may be making a huge difference in someone’s life.

Listening will not solve all of these problems, but there can be no solutions without engagement and discussion; far too often these problems feel like they exist elsewhere. That these are the problems faced by women, other women, not the ones that I know. That’s just not true, injustice within society reaches far beyond its initial victims.

Its hard to understand how anyone in Canada could stand against equality or refuse to engage meaningfully to understand it. So with that, I leave you with this: