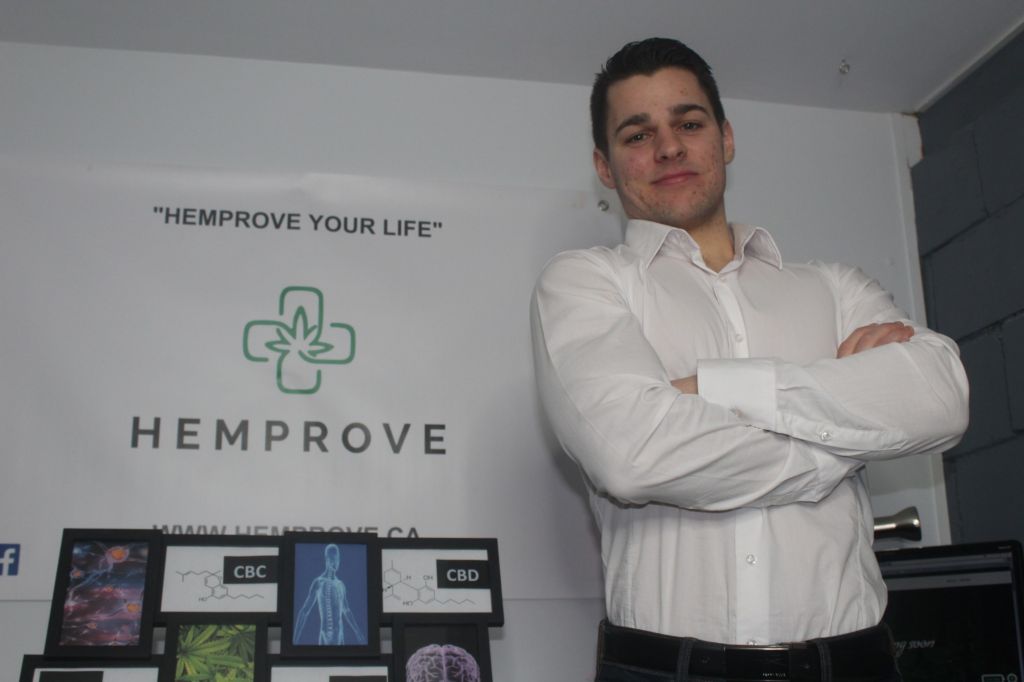 When people think of Cannabis, the things that come to mind are usually hippies, Rasta culture, Bob Marley tunes and teenage stoners with bloodshot eyes. But for former architectural technician and entrepreneur William Fiset, getting into the hemp business was motivated by something different.

Despite looking happy on the outside, Fiset has struggled with a condition ever since him mid-teens – acne. Admittedly he’s found difficulty in simply looking in the mirror to brush his teeth in the morning.

He did everything to find a solution, routinely making appointments with dermatologists. What started with a few different ointments, shampoos or pills eventually extended itself to a litany of highly expensive products that would likely put his health at risk if he used them. That’s when he decided he’d had enough.

After doing research via books, documentaries, articles and podcasts to educate himself on the plant, Fiset finally came to a conclusion that he was committed on leaving his mark on the Cannabis industry.

To know where it started, for Fiset as an entrepreneur, we must go back over a decade, to his days spent scrounging for cans around unfinished construction sites in Aylmer, Que.

Growing up, his father encouraged him to roam on his bike to fill garbage bags with as many cans as he could.

While many children resent mowing the lawn, the 12-year-old Fiset saw it as a privilege. Despite living on a large property and himself being barely half the size of the mower, he still found it joyful.

One sunny day in the Spring, coming home from school, he saw what he claims to be one of the most beautiful things ever. On a flat-bed trailer, on his driveway, stood a black and red Toro TimeCutter Z380 riding lawn-mower, his father bought him as a gift for his work.

After trying it the first time, he was obsessed, mowing the lawn every time the opportunity presented itself. But, that wasn’t enough.

He drafted a letter, presenting himself as an outgoing entrepreneur with an expertise in cutting grass, and handed it door to door, hoping someone would hire him.

Years later, with his client-base growing, he decided it was time for the business to grow itself.

The company called Groupe WIP, an acronym for “William Innovation Professional” debuted in 2016 picking up contracts for residences throughout the Ottawa/Gatineau region. Then, it expanded to a maintenance and real-estate department. But it wasn’t all easy.

But, in the end, he was living a dream – he had a business, employees, an office and all the equipment he needed. Hardships aside, life was good. Despite that, Fiset was looking for something bigger than money and freedom.

Priding himself on finding solutions, Fiset rarely complains when things don’t go his way. Having experienced countless ups and downs, he knows the entrepreneurial life is one that faces failure, embarrassment and ridicule, all of which he has faced.

But, ironically, the only thing he complained about was his face. With an acne condition that only got worse as time went by, Fiset felt like he had to take action.

“I got to a point where I got so much acne that my face was like, not in a good shape,” said Fiset.

After extensive research, he now claims to have found the cure: cannabis. More specifically CBD – a non-psychoactive compound in the plant, proven to benefit health and treat serious diseases.

“I went on every article that talked about CBD,” said Fiset. “I found that it was so good for your skin.”

In November of 2017, he began consuming CBD. Squeezing drops of oil underneath his tongue twice per day – once in the morning then in the evening. Since then, he hasn’t seen a white pimple sprout on his skin.

Then, he came up with Hemprove, which loosely translates to improving life with hemp.

For now, Hemprove is still in its infancy. Although products aren’t yet available for purchase, the plan for Hemprove is to sell CBD oil-droppers by the end of May. Further projects involve adding CBD capsules to the mix.

In addition, Fiset has large aspirations. He wants to dedicate his profits towards rebuilding Puerto-Rico and other struggling countries around the world. It’s not about money.