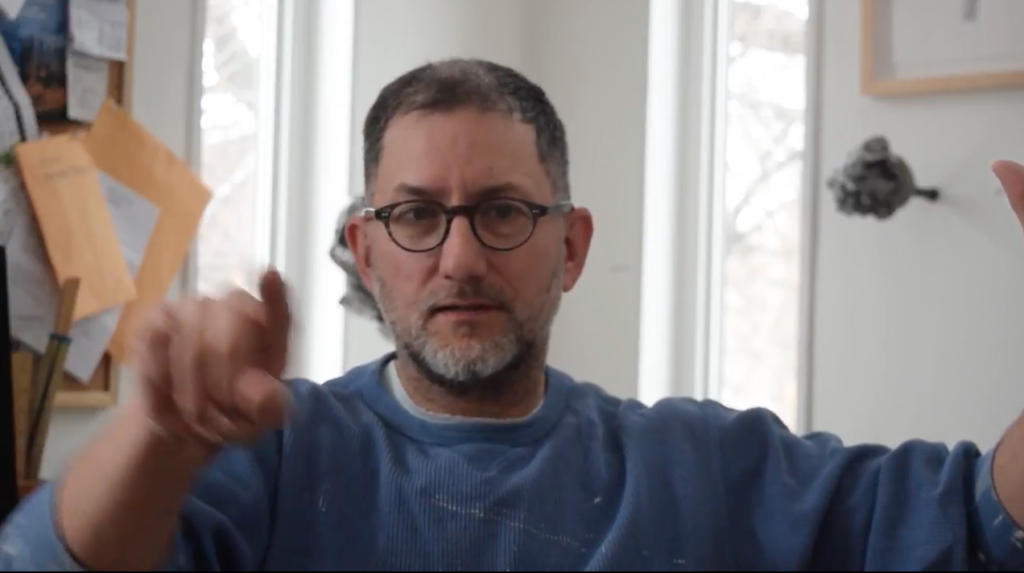 At age 53, Adrian Gollner could be considered a veteran of the public art world. Since graduating from Queen’s University with a bachelor of fine arts in 1987, he has created dozens of pieces for public art displays in cities across Canada and internationally.

Now, he is contributing to the flourishing arts scene in Ottawa. Gollner is helping shape the future image of transit, with a piece titled “As The Crow Flies” for the new Bayview LRT station in its final stages of production.

He received that commission in the fall of 2013, a year before enrolling in University of Ottawa’s masters of fine arts program in 2014. Despite adopting a baby with his wife around the same time, Gollner excelled in the program by virtue of his 30 years’ experience, graduating in 2016. He credits going back to university with keeping him creating during a hectic time in his personal life.

“It just sort of came up, maybe as a way of giving myself a kick in the pants. I thought okay, yeah, I’ll do this. This will be fun. I didn’t know if I would be like a grumpy old man going back into an MFA program but I didn’t care,” he says of the decision to go back to school as an accomplished artist. “Without the MFA program my production would have ground to a halt.”

Gollner’s LRT work is what’s known as an “integrated art work,” which means it serves a function within the station. In this case, it’s a part of the intertrack barrier which separates the east and west lines. The piece has a fencing element depicting the horizon of the area and surrounding architecture, including some of the parliament skyline. Running over the fencing sits a steel line silhouette comprised of a wavy line, representing the flight path of a crow.

“As you’re on the train and you’re looking out the window, you’ll see these rhythms skating by outside the window,” he says. “It’s a daily way of piquing one’s interest, reminding one where one is and marking that station.” He believes this is one of the central roles of public art: an immediate reminder of where you are within your day. “You’re on your way home, you’re nodding off…that public art identifies the station.”

He says the commission process for the LRT project was atypical in that artists were invited to submit their credentials and portfolios rather than pitching a specific idea for the project. From there, the few selected were associated with a specific train station based on their ideas, style and how they would approach the project.

Gollner was paired with Bayview Station, he thinks, because it is (in some sense) a “pique of the LRT,” where it crosses the existing O-Train. His work is largely inspired by “exchanges of energy and emotion,” as well as “transcribing elements of sound and time into the visual world,” he says.

The inclusion of local artists in projects on the scale of LRT is an indication of the overall health of the arts community in Ottawa. The scene has grown continually over the last few decades, building towards what Gollner calls a “critical mass” of accomplished artists; a prospect that excites him. The future of the capital region’s art community has never been brighter, with the highly anticipated grand opening of the Ottawa Art Gallery coming on April 28, 2018. Gollner thinks this may be the result of the masters of fine arts program at uOttawa attracting mature, accomplished artists to the city.

“It’s a municipal gallery that will really mark Ottawa,” Gollner says. “There’s more opportunities for people to exhibit, but there are also many more artists as well.”

This is another indicator of the health of Ottawa’s art community. There are now enough artists to support multiple galleries, with over 2,700 artworks created by over 745 artists in the Ottawa’s municipal collection alone. The key to this success is in the strength of Ottawa’s public art policy, which was updated in 2015 at the call of local artists, including Gollner.

“The way people engage with art in Ottawa had fundamentally changed since the 1980s and the old public art policy,” he says. “The city’s role is vital, and we have an excellent public art program here.”

The role he’s referring to is the commissioning of public art works with municipal money. There are other agencies that give out grants for artists, but the demand outstrips the supply when it comes to those funds. Gollner estimates he makes about 70 per cent of his income through public commissions. Under the new policy, any infrastructure project being funded by the city must have public art incorporated into it, where applicable. Gollner says that having a mayor who appreciates the value of and supports the arts is also instrumental in the health of a community’s art scene.