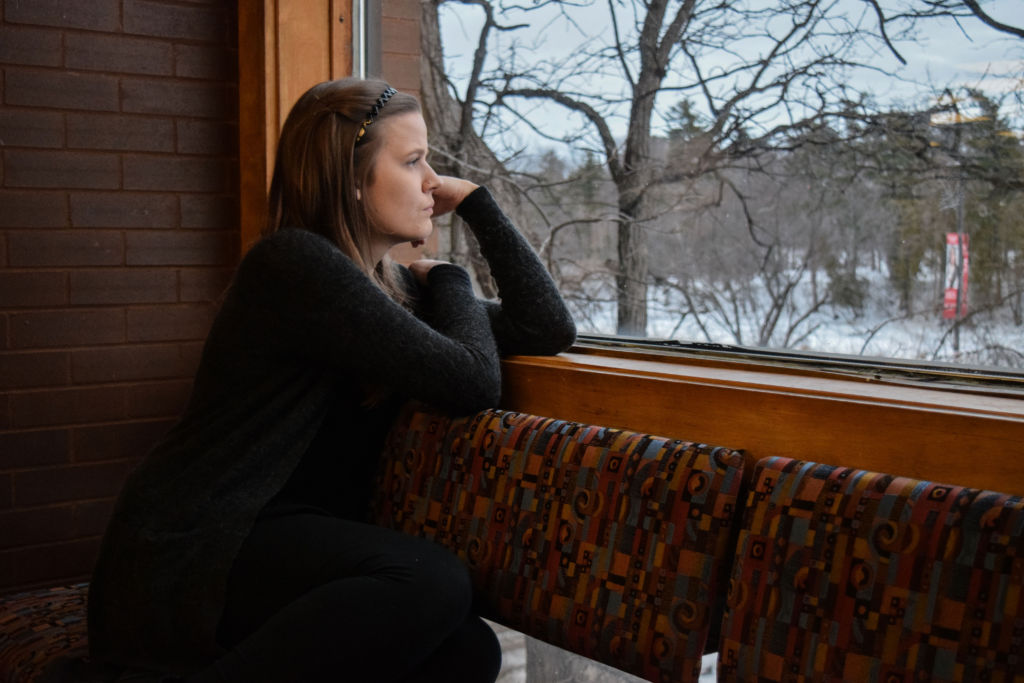 Winter’s at its peak and not too many people are happy about it. For some, the snowy season hits a lot harder than others. Seasonal Affective Disorder, or SAD, is a short-term malady that manifests through depressive symptoms during certain times of the year, namely winter. As we live in one of the coldest and darkest capitals in the world, the winter blues are putting some folks on a slippery slope.

The symptoms of the disorder are similar to depression, such as ebbs and flows of exhaustion and disinterest. It’s easy to fall in to a downward spiral of negativity. For Carleton University student, Andrew Gudgeon, the rhythm of school exacerbates his struggles with SAD.

“It’s easy to go day by day through the emotions,” says Gudgeon. “Show up to class, take notes and listen for hours, then go home and sleep.”

Gudgeon says the disorder really takes its toll in the morning and at night. When the sun goes down he spends more time thinking about his mood while he rests.

“I have a hard time getting up in the morning,” says Gudgeon.

Alex Beeby-Washington once studied broadcasting at Algonquin College, but his case of season affective disorder wrecked his school career. The disorder drained his motivation and consequently robbed him of any desire to catch the fleeting sunlight we get this time of year.

“I couldn’t be bothered to get to class on time or do the work,” says Beeby-Washington. He says he had issues with the administration that ran the program, who weren’t sensitive to his depression. There was one teacher in particular who Beeby-Washington and his class thought of as a bully on a power trip. Eventually, he dropped out of school because of conflicts with inflexible administration and their negative attitude towards his depression.

“The bastard we all complained about flunked me out of one course prematurely so I was kind of just done,” says Washington-Beeby. “I moved to Toronto and haven’t gone to post-secondary since.”

He trained himself to use every scrap of energy to work but this combining his efforts like this causes to crash entirely when he gets home. Beeby-Washington is passionate about scriptwriting, yet there are periods where he can’t write a single word because of his fight with SAD.

“It’s been hell for my productivity.”

February seems to be the worst time of year people suffering from the disorder. University of Ottawa graduate, Phil Guiver, says that it hits him hard right around sunset.

“Leaving for work while it’s dark, and coming home from work after the sun has already set makes it feel like I don’t have any time to enjoy the day,” says Guiver.

Guiver’s is a self-employed roofer, making his work more or less seasonal and complicating his issues with SAD. This predicament is worsened by the stress of finding contract work since he can’t spend his days on a roof with the sun washing over him. In the end, he’s left with a lower income until spring.

On top of the personal weight of seasonal affective disorder, it also puts its pressures on relationships. Gudgeon is grateful for his supportive girlfriend, but notes that at times he becomes distant and easily irritable. Introversion takes over and he loses enthusiasm for all the fun he’d normally have with his partner.

Guiver, on the other hand, has a partner who is also sometimes affected by SAD. So his symptoms stick to his girlfriend at times. She’s supportive of the issues he faces but at times feels helpless in her efforts to comfort him, which can strain their relationship to a degree.

“Sometimes, we’re both having bad day, which magnifies the problem,” says Guiver. “In those moments we find it difficult to help each other.”

Given that the sun is often absent during the winter months, people afflicted with SAD find ways of shining more light into their lives. Guiver’s prone to cabin fever so he tries to get out as often as he can when the sun’s out. If it’s too chilly, he commits to his hobbies while sitting by a window so he can relax and soak up some vitamin D.

Gudgeon’s doctor recommended that he try light therapy, which involves a lamp that can simulate the luminescence of the sun.

“It’s supposed to shine the full wrath of the sun onto me as I wake up, which will hopefully make me wake up naturally and feel refreshed,” says Gudgeon. He also exercises and discusses his feelings with girlfriend in order to gain a bit of perspective.

Washington-Beeby keeps the blinds open and tries to go out and feel the sun on his face as often as he can. He also recommends escaping the confines of Ottawa.

“Save money and go to the Turks and Caicos every February,” says Washington-Beeby.