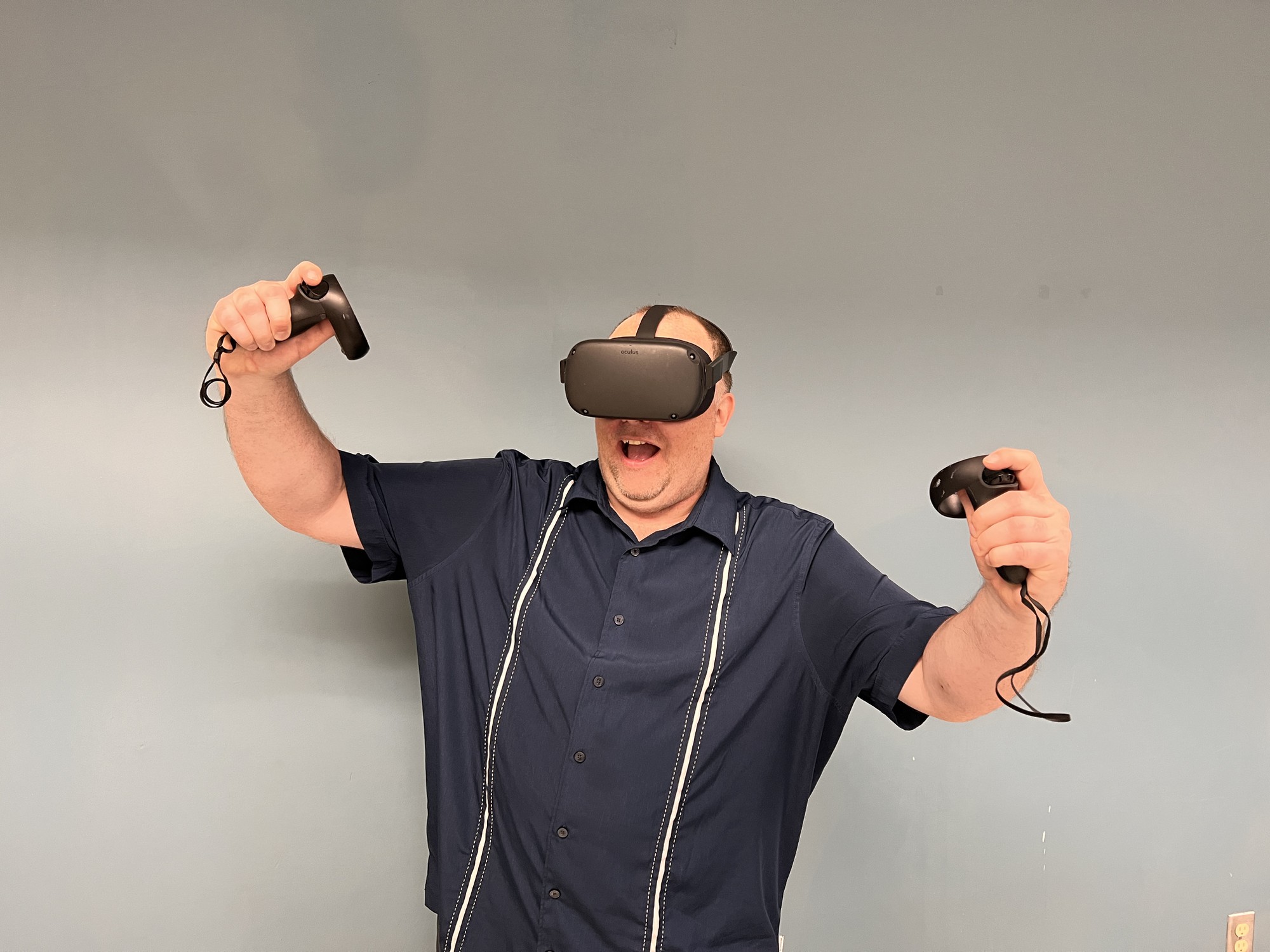 It was my first time in this particular office, and I was more impressed by the view of the mountains out the windows than the Zoom screen with the Hollywood Squares of my classmates’ faces floating on the wall. Compared to everything else in the room, those mountains looked real.

They were not real. Everything I was seeing was being projected to my eyeballs through an Oculus Quest 2 headset (I got it before Facebook changed everything to Meta). This bulky contraption had been more curiosity than tool up until that day.

But then I learned about all the developers trying to woo office workers to VR through productivity apps. Even Mark Zuckerberg was in on it, showing off Horizon Workrooms in an interview with reporters from CNN and CNET. Here was an immersive digital office space where people could sit and work. It even had whiteboards and computer monitors.

My journalism program at Algonquin College was still fully online, so I had a brilliant idea. Why not combine my online schooling with my otherwise-useless VR headset?

That first day was a disaster. My classmates had no idea they were floating heads on a wall. They were blurry, and sometimes the Zoom application dropped completely, forcing me to restart the entire headset. Plus, I couldn’t show my own face. There was supposed to be a way for me to talk, but I could not figure it out.

Still, most of it worked. Thanks to the Quest 2’s forward-facing tracking, I could bring my wireless keyboard into the meeting. My desktop was linked to the headset via wi-fi and the Oculus app, so I was able to see everything on my computer. Two disjointed cartoony hands floated in front of me. It took me a few moments before I realized those were mine.

I became so enthralled with the possibilities of virtual reality that I chose to replace my desktop gaming PC with my Quest 2 for a week. I was young and stupid back then, in 2021.

To do this, I needed some help. While the Quest 2 uses technology called AirLink to stream from desktop to device, it’s glitchy and images are often low quality.

Instead, I spent $15 and purchased Virtual Desktop, the most popular app on the Oculus app store. It allowed me to turn my headset into a virtual computer. Not only could I diligently work and study from the comfort of my La-Z-Boy, but I could also play all those Steam games I had installed on my PC.

But problems began on day one of my experiment. For starters, Zoom refused to play nicely, even when passed through Virtual Desktop. Sound issues persisted, and there was no way to show my face to the other attendees.

Then keyboard lag became a real problem. You can imagine the amount of typing required in a journalism program. I had a fairly comfortable Logitech Bluetooth keyboard that had never given me any problems, until I attempted to bring it into virtual reality.

It began innocently enough, with the odd keystroke missed here and there. But the longer I typed, the more diluted the wireless signal became. Keystrokes experienced lags that started to impede my ability to write anything coherently. Soon, any key I pressed had a 22-second delay between my finger hitting it and the letter appearing on the Word document I was looking at in VR. Imagine writing an 800-word article and having to wait 22 seconds for each letter to appear.

It only got worse.

Battery life on the Quest 2 was horrendous. Fair enough. It needed to power a 90 Hz LCD screen and a Snapdragon XR2 processor running Android 10. It needed to keep four 1000 Hz tracking cameras going all the time, and don’t even mention powering both Bluetooth 5.0 and wi-fi 6 at the same time.

I splurged and got a third-party strap with a battery pack, but even that wasn’t enough for long periods of workload, such as running a Zoom meeting while taking notes with OneNote at the same time. Two-hour classes were toast.

There were many days when I would rip the VR headset off my face in frustration and power my PC back on. But even when powered off, the Quest 2 held my mouse and keyboard captive. I would have to wait for it to turn back on and then disconnect them manually from the settings menu. Forget it if it ran out of power. First, I would need to charge it up for an hour. Only then could I free my poor keyboard.

It turned out not to matter, because a month after I gave up on VR we were back on campus for journalism classes. While there are no mountains outside the windows of Algonquin College’s Woodroffe campus, it certainly was nice to see my classmates in full, rather than as just a bunch of floating heads on a cartoon wall.