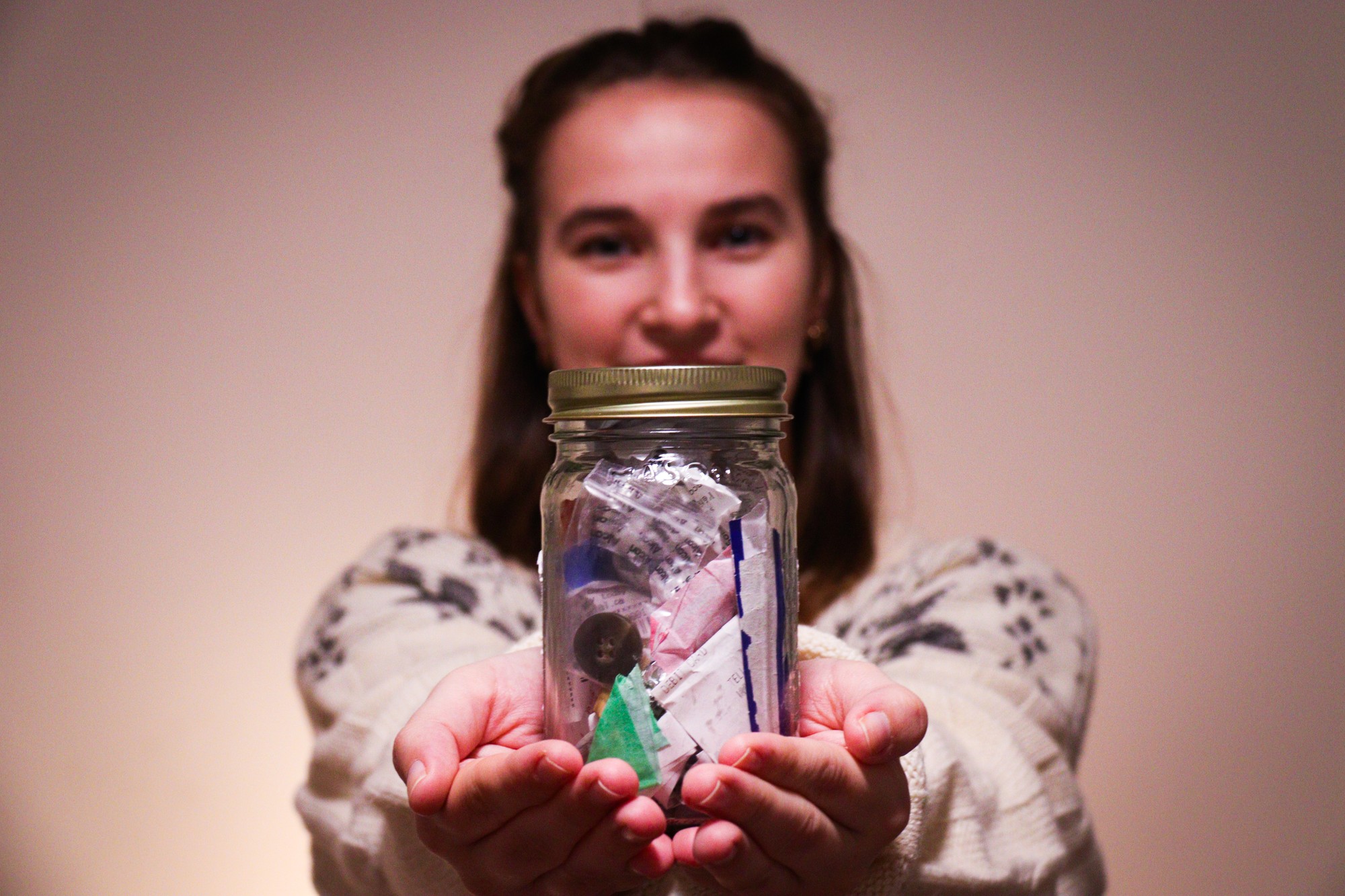 The average Canadian produces 2.7kg of garbage every day. Those who follow the Zero Waste movement often try to fit the small amount of garbage they produce annually into one jar.
Photo by: Maggie van Lith

While scrolling through Instagram a few years ago I was intrigued by a photo of a woman holding up a small mason jar filled with what appeared to be garbage. The caption read something along the lines of “all the trash I have produced in the past three years.” I didn’t think that was possible. How could someone produce so little trash? Was she recycling everything else? What does she do on garbage day? This was my introduction to the zero-waste lifestyle and the start of a mindset shift that has impacted my life ever since.

If you have not already heard of the zero-waste movement, it is, according to the Zero Waste International Alliance, “the conservation of all resources by means of responsible production, consumption, reuse, and recovery of products, packaging, and materials without burning and with no discharges to land, water, or air that threaten the environment or human health.”

Those who follow this movement are often making their own toothpaste and deodorant, bringing their own coffee cups and utensils when they go out, using cloth totes, biking and shopping at farmers markets. It all sounded great to me, and I was eager to reduce the waste I produced and try to tackle my impact on the planet. I decided to take on the challenge to go fully zero-waste.

I quickly noticed how almost all the food I bought had some kind of packaging, the clothes I bought were not second-hand and the makeup products I used were not all cruelty-free and still came in plastic packaging. Going through every single product you have ever owned is tiring. I started with my toothbrush and switched to a compostable bamboo one. Next, toothpaste. I made my own out of coconut oil and baking soda with a recipe I found online. Then I started buying only fresh fruits and vegetables with as little packaging as possible. I sifted through the apples at the grocery store looking for the ones without little stickers.

Making all these changes for the environment felt good, and I thought I was really making an impact and doing my part. Like many other people in this world, we just want to feel like we’re doing something. That is how Boaz Aharony, 19, feels when he makes sustainable swaps in his everyday life.

Aharony is in his second year at Carleton University in the aerospace engineer program. To reduce his carbon footprint, he makes an effort to take public transportation to get around or uses his bike. He also tries to carry his own utensils and bring his own cup to campus to get his coffee, but since the onset of the pandemic, he has noticed some challenges.

“I don’t like how a lot of places have started using COVID as an excuse and not accepting reusable cups,” he says. He is also making an effort to buy from businesses that he knows are low waste. “I honestly think, and I know people don’t like when you say this, but I do think a lot of responsibility is on you because you can say it’s big corporations, and it is, but it’s also your decision to buy from them.”

While zero-waste may seem like a great solution, it is not entirely realistic for a lot of students. In Ottawa there is only one zero-waste store called Nu Grocery and although they do offer a delivery service, it would be a long commute for many students to go to their one location in Hintonburg. Then you have to consider the pollution from having your groceries delivered versus walking to your local grocery store. When comparing the costs of Nu Grocery and a non-zero-waste store such as Loblaws, there is only a marginal difference. For example, an avocado at Loblaws is typically $1.99 while at Nu Grocery it’s $2.49. On the other hand, a dozen free-run eggs at Loblaws costs $6.29 while at Nu Grocery you can find a dozen free roam eggs for only $5.75. In the fight against climate change, every decision is a huge consideration.

Visiting Professor at uOttawa and senior fellow at the Smart Prosperity Institute, David Runnells affirms the importance of college campuses creating their own policies to reduce waste and be more sustainable. Runnells has noticed more bike racks on the uOttawa campus for students but wants to go even further when it comes to encouraging students to take public transportation to get to school.

The climate change battle is largely being led by the younger generation, Runnels says. “You see it with all the climate change negotiations, for example, the noise is all being made by younger people and the delegates are now getting to the stage where they are starting to pay some attention.”

When reflecting on how the current situation has gotten so bad, he says, “it’s your future we’ve screwed all up, you’ve got to make a change and you’ve got to put a pressure on the political process to do something about this.”

Many people are unhappy with the climate crisis and are feeling angry at politicians, corporations and officials who are not listening to the seriousness of this crisis. This sparks the motivation behind making sustainable swaps and looking for environmentally conscious alternatives in everyday life. This is what was going through my head while trying to eliminate all that plastic and waste in my house. I was quickly noticing some of the common problems associated with the zero-waste movement, however.

Making your own toothpaste takes time and not being able to buy some of your favourite foods because they don’t come package-free is disheartening. I started to feel that if I could not reach 100 per cent zero-waste, then I shouldn’t be doing anything at all. I’ve now come to realize that every little bit counts and to not discount my own efforts.

Carleton student Victoria King, 22, has had her own experience after learning about the zero-waste movement through social media. Like me, she saw the mason jars full of trash and those boasting about how it was all they produced in many years. This sparked her to start thinking about her own waste.

Now, King runs her own small business selling handmade items. While conducting her business she is on the lookout for ways to keep her business green. She tries to find eco-friendly alternatives when it comes to packaging her products. She recycles cardboard for shipping and reuses packing. She has even found ways to incorporate sustainability into the care of her pet hamster by switching to a more sustainable bedding for his cage.

“I just like thinking about what I do before I’m doing it,” she says. “Things like making sure I know what can and can’t be recycled so you don’t clog up the facility by putting a soft plastic where it can’t go. That’s kind of where I’ve landed, I feel like I’m making a good impact and I don’t feel especially bad about my existence and how it impacts the planet.”

It’s been a few years since my attempt at going fully zero-waste and I can now see why it was unachievable for me. Being rooted in the notion of not bringing a single piece of waste into your life is huge and overwhelming. Instead, I’m now focusing on smaller ways I can make an impact. I bring a reusable cup or bottle when I can, I stay educated on the current crisis, I recycle and compost and I’m always on the lookout for a simple swap that is affordable as a student. Things like reusable beeswax wrap instead of plastic wrap in the kitchen and package-free shampoo bars. Caring about the future of our planet is not restricted to a handful of people living a perfect zero-waste lifestyle, instead, we need everyone to do the little things whenever they can to try and make a difference.