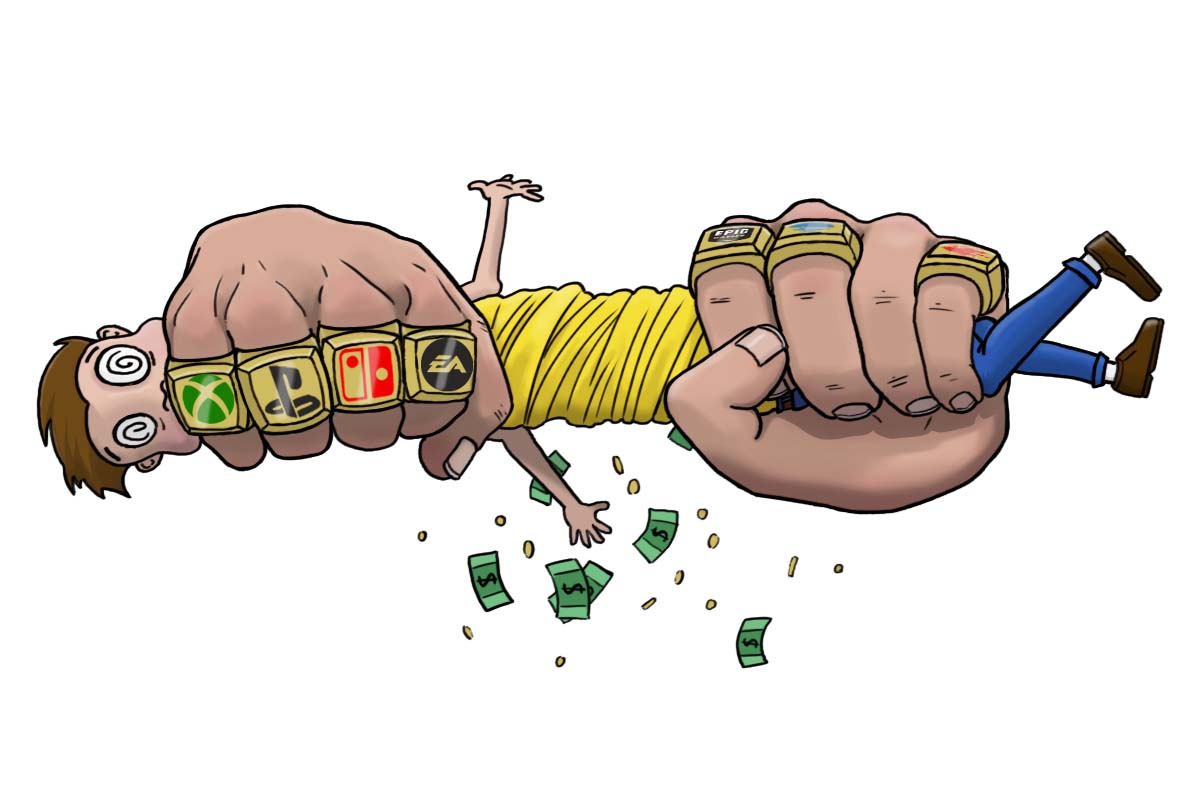 Since the Magnavox Odyssey was first released in 1966, video games have been a part of our lives. The gaming industry survived a crash in 1983 and has come back stronger than ever, projected to be worth $180 billion in 2021, according to Tech Jury.

I am guilty of supporting this industry, as I own a Nintendo Switch and an Xbox Series X. However, over time, my rose-coloured glasses have disappeared and I’ve begun to see the shady practices the gaming industry has used to make a quick buck off consumers, including post-secondary students.

This is how much?

Video games are becoming outrageously expensive. This is going to sound antiquated, but $89.99 plus tax for a standard version of a video game is too much. In the era of the N64, games cost around $10 less according to Business Insider. However, with the seventh generation of consoles (Xbox 360, Playstation 3, and Nintendo Wii,) they raised the price to $79.99, where it has sat until now. Now, Sony has announced games for the Playstation 5 have taken a $10 price jump to $89.99. Gamers are getting frustrated by these prices.

As if games are not expensive enough, some are filled to the brim with microtransactions, which are extra purchases made in a game you already paid for, to bleed consumers for all they are worth.

“I have had to deal with them quite a bit,” says Carter Dallaire, a first-year Game Design student at Algonquin College, about microtransactions in gaming. “I find them scummy, and feel they feed on addiction and the idea that ‘oh, it’s only one dollar.'”

In particular, publisher Electronic Arts is absolutely terrible for this. Madden Ultimate Team, FIFA Ultimate Team, and Hockey Ultimate Team – projects churned out by EA yearly, charge their consumers yearly for packs and other goodies. However, their biggest sin came with Star Wars Battlefront 2, which was a full-price game release, yet came with most characters behind level locks that you could pay money to bypass. The game also featured loot boxes to get upgrades for characters. It became pay-to-win, and gamers responded by leveling the game with review bombs. EA tried to explain themselves on Reddit, which led it to become the most disliked post on Reddit.

After Battlefront 2, some countries began banning loot boxes, equating them to gambling for children, according to Screen Rant. It is a dirty practice to keep bleeding more money from consumers.

Knock off the knockoffs

When one company benefits from a unique idea, the market quickly floods with knockoffs, which usually drive all parties involved to closure. Toys-to-life games quickly became saturated with titles like Skylanders, Disney Infinity, Amiibo, Lightseekers, Lego Dimensions, and Starlink: Battle For Atlus, all helping to crowd that market to the point that it became unsustainable, resulting in nearly all of their ends with the exception of Amiibo. Before toys-to-life, the craze was rhythm games. Guitar Hero, Rock Band, Rocksmith, BandFuse, and more all entered the market quickly, and all companies quickly met their end. Now the same thing is happening in the battle royale genre with titles like Fortnite, Player Unknown’s Battlegrounds, H1Z1, Call Of Duty Warzone, Apex Legends, and more are fighting over a market that is more filled than a jelly donut.

The newest underhanded practice that game developers have employed is releasing broken games and patching them into playability once the money has come in. The first real example of this came with Hello Games’ title No Man’s Sky. After promising the sun, the moon, and 18 quintillion procedurally generated planets (a real thing promised by Hello Games founder Sean Murray), what they provided at launch was a mess of programming, full of bugs and lacking any of the features that Murray told fans, at E3 and other press events, would be included.

After two years of work, they had patched No Man’s Sky into a critic’s dream game. Four years later, CD Projekt Red’s Cyberpunk 2077 was set to release and gamers were excited. The game was a passion project, and after eight years of development, it was released on December 10, 2020. The game was extremely buggy, and even rendered some players’ Playstation 4 and Xbox One consoles completely unusable. Sony had to create a returns system because of how bad the Cyberpunk glitches were. CD Projekt Red has been working on patches to fix the bugs, but over nine months later, the game is still buggy and has game-breaking glitches.

Multiple lawsuits have been filed since the game’s release, claiming that CD Projekt Red downplayed the severity of the technical issues with Cyberpunk before launch.

As games cost more and more, and wages do not increase in the same way, people have begun to get frustrated. Some gamers have even decided to learn game design to make changes.

Gacha-style games mimic a Gahapon, the Japanese word for a toy-vending machine. These games revolve around you paying to get a random in-game item or character, similar to the way a toy-vending machine will dispense a capsule at random. Gacha-style games are usually free to play, but littered with microtransactions. This genre includes games such as the wildly popular Genshin Impact, as well as Madden Ultimate Team.

Dallaire is among gamers happy to learn that Europe has banned these endless requests for more money within games.

“I have never been more thrilled. I believe that loot boxes and the premise of Gacha-style games are unreasonably against human nature. Don’t give me something to get addicted to.”

Even those who have been in the industry have strong words about some of these practices. Releasing unfinished games is the result of developers having a fixed timeframe and budget, and being funded by a third party, according to Jodi Tilley, who formerly worked in the industry and currently works as an instructor in the Algonquin College game design program. “That being said, if they release too soon and their game is not beta quality, they’re going to shoot themselves in the foot because people will complain and they will get bad press, they won’t get as much to dev, players won’t buy. So, the process is a very fine art. Yes, you’re going to release with bugs. But we don’t want to release them with what we call high priority bugs. We want our consumers to enjoy our games… You may release with a bug you didn’t catch, but that is different.”

Most gamers agree that something needs to be done about the industry. The banning of loot boxes, for instance, has begun around the world. However, the idea is a divisive topic among gamers.

The only time they should be banned is in games where you pay to play, and where the loot box gives physical advantages, such as in Star Wars Battlefront 2. Something like Blizzard’s hit game Overwatch, where the loot boxes give you cosmetic changes, voice lines, and items that do not affect in-game played should be allowed. However, a game like Genshin Impact, where you pay for a random chance to get characters, should absolutely be banned, because people will continue to put themselves in debt to acquire characters.

Developers of the 2020 hit game Hades, Supergiant Games, and ConcernedApe, the creator of the hit game Stardew Valley, show that you do not need underhanded tactics to succeed in the gaming industry. The hope that people quit buying video games in protest is unrealistic. Believing in people boycotting an industry that made 180 billion dollars is blind faith. However, the key may be in utilizing the internet.

When SEGA was shamed for their humanoid looking design of Sonic The Hedgehog for the blue blur’s movie, SEGA listened and altered his design to be less humanoid, and people turned out. When No Man’s Sky developers Hello Games got leveled by anybody with a microphone after the release of the game, they spent years fixing it, and now No Man’s Sky has won multiple awards.

Gamers have power. They just need to protest against the things they dislike and support developers who try to make a difference. Hopefully, by using the same tools they did against SEGA and Hello Games, gamers can help trim some of the decaying branches of the video game industry so the tree can grow larger for a very long time.