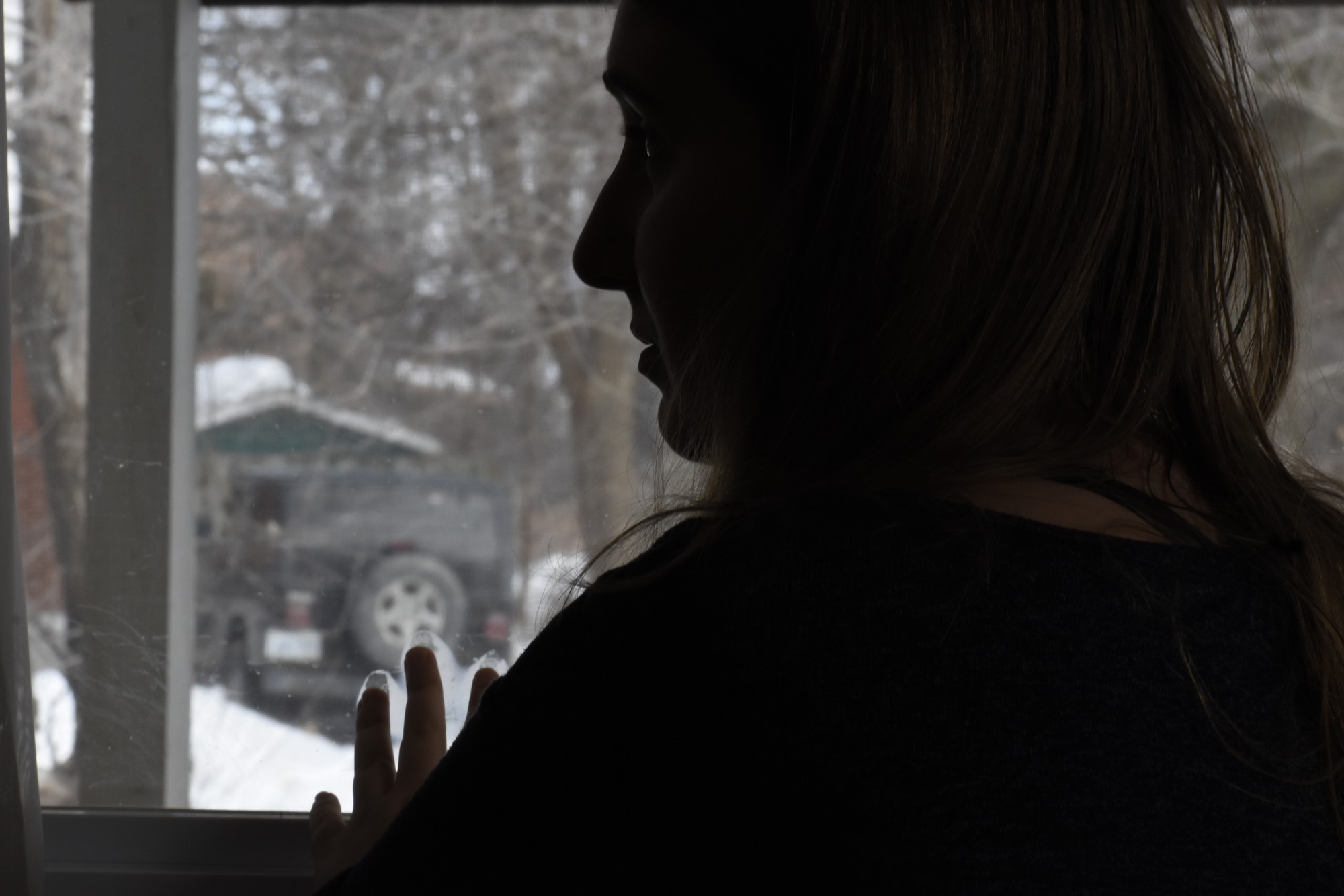 Since the implementation of pandemic restrictions in March 2020, survivors of domestic violence have had to look for new ways of getting help.
Photo by: Meara Belanger

Long before a pandemic was declared early last year and COVID-19 restrictions were introduced in Ottawa in March, 2020, a more insidious disease lurked in Canadian homes.

Domestic violence is typically associated with “broken families”, and has historically been contrasted with an idealized version of family life. However, domestic and family violence is statistically more common than one may think. Data from the Government of Canada reveals that in 2018, domestic violence accounted for approximately 30 per cent of reported violent crimes. In the same year, police data showed that 99,452 reported experiencing domestic violence, 79 per cent of whom identified as women. However, statistical evidence from a September 2020 report indicates that these existing problems have only been compounded by stay-at-home restrictions.

In the initial four months following the implementation of pandemic restrictions, 17 police services across Canada reported a 16 per cent overall decrease in reported crimes. However, of the 17 police services, only three were able to report on “calls for service”, where they saw increases in calls concerning domestic disturbances (12 per cent), welfare checks (12 per cent), mental health (11 per cent), and child welfare (19 per cent).

The data surrounding domestic violence reporting is murky, because most datasets from victim services and police services are conflicting. In July, StatsCan released a survey revealing varied experiences from victim services workers during the initial months of the pandemic. Between mid-March to July, 50 per cent of respondents saw no difference in the volume of clients they served. 31 per cent said the number of clients they served increased, while 19 per cent said they saw a decrease.

Some experts suggest the lack of reporting — and subsequently, the lack of data — could simply be due to the consequences of stay-at-home restrictions. Survivors, particularly women, may fear calling for services or leaving the home now that their abuser is not leaving for work or to attend other activities.

According to a study published by BMC Medicine in February, that’s exactly what researchers from the Ottawa Hospital fear is happening to women living in abusive homes. Researchers indicate a 50 per cent drop in reporting between March and May 2020, compared with that same period two years prior.

Until recently, many of the calls from survivors were answered by a diverse group of trained counsellors at the Ottawa Rape Crisis Centre. However, those seeking support from domestic violence had to find another option when ORCC closed and laid off most of their staff in November.

Sarah Crawford is the sexual assault prevention and harm reduction coordinator at Algonquin College. She has seen first-hand the impact that ORCC’s closure has had on Ottawa’s survivors, and the students at Algonquin.

“We had a partnership with ORCC to provide our clients a counsellor twice a week, providing specialized training for anyone who’s experienced sexual violence,” says Crawford. “The closure, it’s hard.”

Crawford explains that the relationship between the school and ORCC was tight before the closure. The organization attended all of Algonquin’s events free of service, and genuinely advocated on behalf of the school and its students.

Since its temporary closure in November, ORCC has taken steps to get up and running again. In December 2020, they announced a partnership with Sexual Assault Centre Kingston to host a 24/7 emergency phone line. In early January, they partnered with the Centre for Interpersonal Relationships, a private counselling service, to bring free remote counselling sessions to their clients.

Crawford is concerned about the clients – and staff – who have left the centre and may not want to return to such an unfamiliar environment. The lack of communication between ORCC and the college has left Crawford and her own clients in the lurch. She has been left to pick up the pieces.

“We’re just starting a new peer support program on campus,” says Crawford. “There’s trained student peers who are referring students to other services. We’re starting that in the next few weeks to fill in some of the gaps that ORCC leaving has left behind.”

Other organizations in the city are scrambling to fill the void as well. The Ottawa Coalition to End Violence Against Women (OCTEVAW) is an Ottawa-based organization that works to end gender-based violence. In partnership with Interval House of Ottawa, Crime Prevention Ottawa, Ottawa Victim Services, the Western Ottawa Resource Center, the Eastern Ottawa Resource Center, Kind Space and Lanark County, OCTEVAW provides an emergency text and chat service called Unsafe at Home.

The service allows survivors to chat with counsellors from their mobile device or computer without leaving the house. For someone who’s trapped at home with an abuser, this can provide huge relief.

Carina Maggiore is the project coordinator for Unsafe at Home. She says that although there is no organization in Ottawa quite like ORCC, Unsafe at Home is attempting to help survivors as best as they can.

“The ORCC had a very unique role, and there hasn’t been anything in place since the closure to take on that role,” says Maggiore. “Organizations have had to do patchwork in order to provide similar services, and just let survivors know that we’re still there for them.”

One of the things that makes Unsafe at Home unique is that their chat service is encrypted, so clients can be sure that their conversations are safe and secure. The most critical responsibility of the volunteers is to counsel clients in need of help, but the line also provides referrals and other services.

“We can really set them up to get everything that they need, as well as provide more support,” says Maggiore.

Maggiore says that one of the things that makes a service like Unsafe at Home so vital is the lack of respite for survivors from their abusers.

“Imagine that you’re a person at home who lives with abuse, but your abusive partner goes to work, or visits their friend, or has other obligations,” says Maggiore. “Now, during COVID, your abuser is always home, cannot go out, and you can’t go out. You don’t have access to any support, you can’t even get away from the abuser to make a phone call to the shelter.”

That’s where the idea for Unsafe at Home comes in. However, feelings of fear, anxiety, and isolation are still very prevalent for many, according to Maggiore. Even if survivors do reach out, they may not access the help they need, such as leaving their home to seek safety at a shelter.

Maggiore says she hears from many women who are afraid of accessing shelters because of the possibility of contracting COVID-19. She says she does her best to encourage them, saying that shelters are following public health standards and are a far better alternative to an abusive home.

“You may be afraid of contracting COVID, and that’s a possible fear, but the real danger of living with abuse is continuing, despite the presence or lack of COVID,” says Maggiore.

Sarah Davis is the executive director at Cornerstone Women’s Shelter. Although it isn’t a designated violence against women shelter, she says many women stay there – particularly now – to seek help from an abusive domestic situation.

Davis is aware that some survivors may be avoiding staying at the shelter due to COVID-19 anxieties.

“We have women that share space, but we have six feet between the beds and they have their own private space,” says Davis. “The common space is distanced in that there is one person per table. We have all the PPE available for all the women and cleaning services in the location, and we have sanitization stations available for women at all times.”

“We’ve had women show up at our home location looking for support and we’re not there, and that can be a fear of, ‘I know Cornerstone as this,’” says Davis.

Recently Davis has been counselling many women at the centre who are having a hard time dealing with the transition from the old building to the new location. She says many of the residents are confused and afraid of their new surroundings and anxious about meeting brand new staff.

Since the start of the pandemic, Cornerstone has been receiving clients from all walks of life – including women who have never lived in a shelter before. For some, the experience can be shocking, even terrifying. Particularly now, Cornerstone is unable to provide all the services they once could to their clients. That includes releasing them temporarily to other programs for detox treatments or various therapies, which can sometimes make helping survivors of abuse an even greater challenge.

“[Before the pandemic] we could address individual struggles – whether it be mental health or addiction or safety concerns,” says Davis. “That’s not true of what we can do anymore given that we can’t take a woman and place her in another program and have her return due to isolation. That’s just not available anymore given additional barriers.”

“There’s a number of different resources available,” says Davis. “All you have to do is call and help will be on the way.”

Davis has an inspiring story of her own to share with survivors looking for a way out. About seven years ago, she was trapped in an abusive domestic situation with an intimate partner.

“It’s why I say that there’s always help,” says Davis. “I was lucky enough that he went and I got out. If he hadn’t, I don’t know…”

Davis says that she had everything going for her when she found herself in a toxic relationship. She didn’t understand what was happening to her until she was in the midst of it.

Davis had already established a career as a frontline victim services worker at the time, so she had prior knowledge of the supports that were available to her. But without the encouragement from her loved ones, she says she may not have had the courage to take that first step.

“I felt very alone and very dark, but I had a moment of clarity,” says Davis. “I had [some time] on my own, and he was working. I sent out one email, and that’s all it took. It’s okay to not be ready to go, but when you are, even if you’re considering it, reach out.”

If you or someone you know needs help, here is a list of resources you can call. For more information about domestic violence, view OCTEVAW’s annual reports.