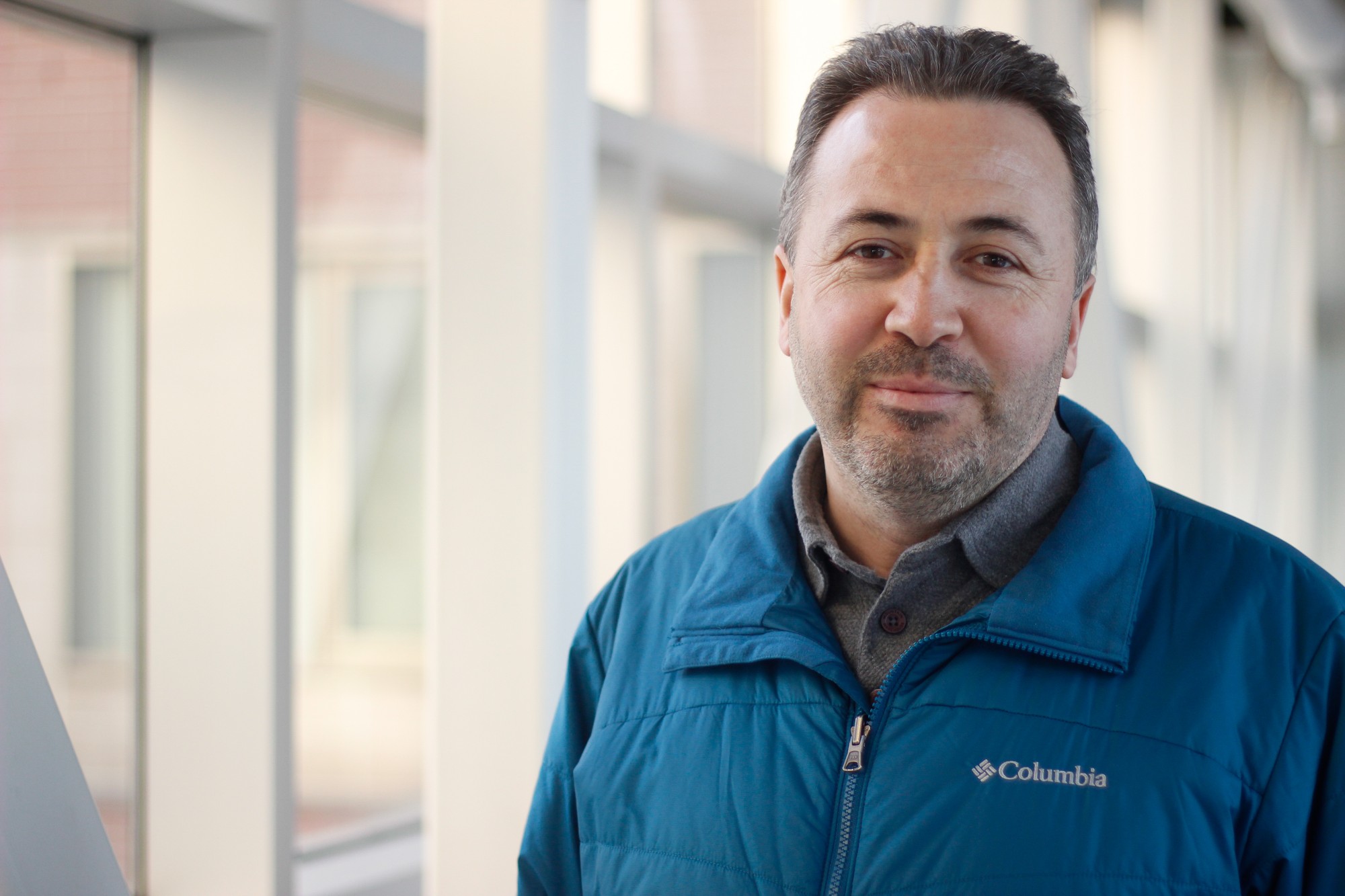 Seckin Ergun on the Algonquin campus before COVID-19
Photo by: Jorge Maria

On July 15, 2016, two missiles fired from F-16s slashed through the air and a second later, two buildings in Ankara’s Presidential palace complex burst into debris and smoke. It had already been several hours since a small military faction began its attempt to seize control of the Turkish government.

Sekin Ergun, a Turkish citizen, longtime journalist and civil servant, watched this unfold from the safety of Canada. Two weeks after the failed coup, Ergun’s wife, Betul, made a frantic call to her husband – the police had raided their home. They questioned her on Ergun’s whereabouts while his children looked on. She was afraid and didn’t know what to do.

Ergun’s decision to flee Turkey for Canada was not an easy one. It would take years before Ergun concluded he had no other option.

After receiving a Masters degree in public policy and administration from Gazi University, he began his career at Cihan News Agency – at the time one of the largest independent news agencies in the country.

In 2006, he started his first TV job with Samanyolu TV as a parliamentary affairs correspondent, traveling within Turkey and abroad, covering the government.

Of the 52 people implicated in the scandal, all of them were connected, in one way or another, to the ruling AKP party. The scandal involved a “gas for gold” scheme in which Turkey’s elite were using a loophole in U.S. government sanctions against Iran to buy fuel with gold bars.

Employees of the Ministry of Environment and Urban Planning – the ministry Ergun once worked for – were tied to the scandal.

“It was biggest corruption scandal in Turkish history,” says Ergun.

In the second half of December, news of a second wave of arrests was leaked to the press. The sons of then prime minister and current president Erdoğan were implicated.

But that second wave of arrests never happened. Hundreds of police officers working in financial crimes were fired. The prime minister implicated Fethullah Gülen, living in exile in the US, the inspiration for the Hizmet movement – the same man that would later be implicated in the failed coup of 2016.

An avalanche of stories on the scandal appeared in Turkey’s independent media. While Ergun was working in the government, he was still freelancing and was very vocal on Twitter about the corruption scandal.

The scandal created a divided nation. There were those, like him, who believed in the rule of law, in democracy and that corruption must be stopped at all costs. The other half of the country, media organizations and those close to the government, were on the other side. This was the beginning; journalists and others who didn’t follow the government line were persecuted, muzzled and arrested.

Secularism is embedded in the Turkish constitution. It has long maintained a free press, even under the early years of Erdoğan. Ergun thought he was well within his rights to express his opinions regarding the scandal on Twitter and elsewhere.

The scandal was in 2014 and Ergun’s tweets would soon get him in trouble. As it played out, there were wide-spread accusations of judicial manipulation on the part of the government. Ergun posted comments on Twitter implicating members of the AKP. In March of 2014, he was demoted, he says, because of his past affiliation with news organizations that were perceived to be critical of the government and his criticism on Twitter.

“I was reprimanded and threatened,” says Ergun. He was now working at an entry-level position at the same office.

While Ergun got demoted, major independent media outlets like Cihan News Agency and Samanyolu TV were shut down and their directors arrested. Government-affiliated news organizations publicly accused people like himself of being members of the Hizmet movement. Ergun continued to tweet.

He was reassigned again, this time to Adiyaman province, a nine-hour drive away from his wife and sons living in the capital of Ankara.

After six months, he returned and was threatened with firing again. Many of his colleagues had been arrested or disappeared completely at this time.

According to a 2018 report from Human Rights Watch, as of June of that year one fifth of the total prison population, 48,924 people “had been charged with or convicted with terrorism offences. Those prosecuted and convicted included journalists, civil servants, teachers, and politicians, as well as police officers and military personnel,” the report said.

A U.S., State Department report goes further and says the majority of detainees were accused of being affiliated with “the movement of cleric Fethullah Gulen, whom the government accuses of masterminding the coup attempt, and designated by the government as the leader of the “Fethullah Terrorist Organization” (“FETO”).”

This is the same group Sergun was accused of being a part of by government authorities prior to fleeing the country.

In Oct. 12, 2017, Human Rights Watch issued another report describing 11 cases of torture, a small fraction of other credible examples.

“Human Rights Watch heard accounts of detainees stripped naked, and in some cases of detainees being threatened with sexual assault, or being sexually assaulted. In many cases, the torture appeared to be aimed at extracting confessions or forcing detainees to implicate other individuals,” the report said in its summary.

By March of 2016, he decided he could no longer stay. The following month he applied for a visitor’s visa and by June, he was in Canada. The plan was to send for his wife and children within a few months, but the coup changed everything.

Within weeks of the coup, Erdoğan suspended the European Convention on Human Rights and declared a state of emergency.

Tens of thousands were fired in the government purge of the civil service. His wife was one of them. There was fear everywhere. His wife could not work and could not pay the rent. She feared arrest and that her children would be put in an orphanage. The family had to leave.

Ergun managed to get visas for his wife and children in those early days, but as the crackdown escalated, his wife’s visa was canceled. His two young children, five and nine years old at the time, would have to make the trip from Turkey to Canada on their own.

At nine and five, they boarded the plane for the approximately 16 hour flight to Ottawa. One month later it would be her turn.

Through his existing networks in Turkey, Ergun managed to find smugglers that could get his wife out of the country. With refugees from Syria, Afghanistan and now Turkey, they would cross the Maritsa river which separates Turkey from Greece.

It has been four years since the family made their escape. They are building a life for themselves in Canada now. Ergun’s youngest son, nine, is learning English and French — both official languages of Canada.

Most of their friends and family are still there in Turkey. Ergun is happy; he is in school at Algonquin College working on a multimedia degree and his wife Betul is taking English for Academic Purposes. But when he speaks about some of his colleagues who are still there, his tone changes. He becomes circumspect. He doesn’t want to say anything or name them because he is afraid they may be hurt as a result.

Sergun and his family have found community in Ottawa. They are safe and their children are getting a good education.

They continue to hear news from friends, family and the media about the evolving situation in Turkey. Months ago several young people died at the border while attempting to cross the Maritsa river. This deeply affected her, she could have easily been one of them.

COVID has made things difficult for them. Their extended family is still in Turkey. Ergun has applied multiple times for visitors Visas so that his in-laws can visit. He has been declined every time.

The isolation has also put a strain on the family. Over the last several years he has managed to make friends and find community, in school and elsewhere, but the COVID lockdowns ended that. The family goes on though, they are happy to be making a new life here in Canada.