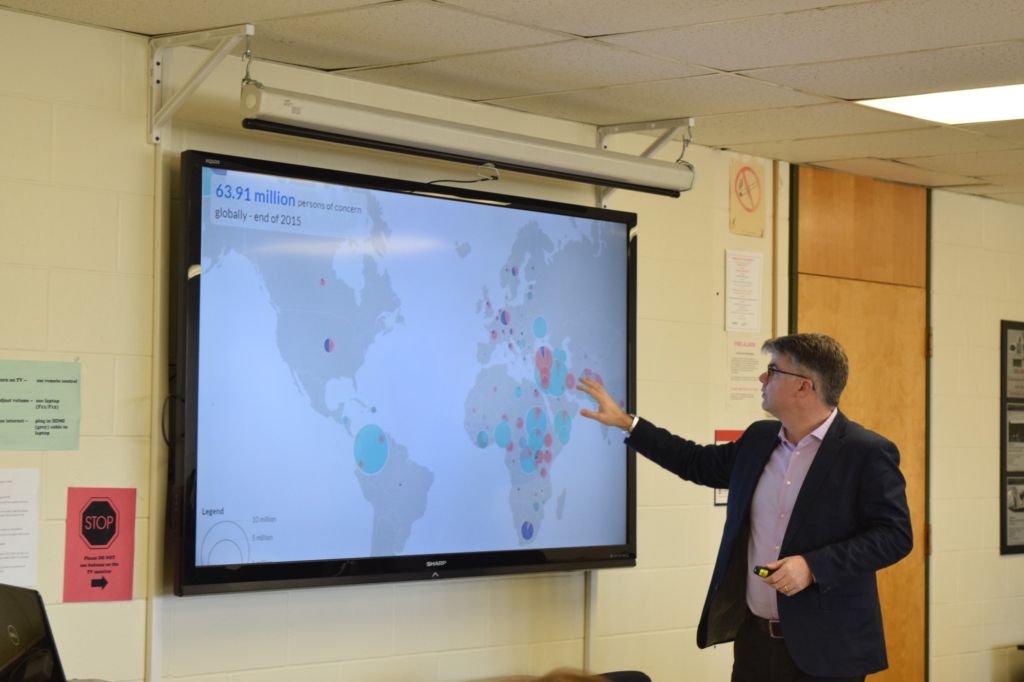 Instead of spending their lunch hour in the cafeteria, students and professors eagerly rushed into a classroom at Carleton University for James Milner’s seminar on the global refugee regime on Jan. 31.

Milner is the director of the Local Engagement Refugee Research Network (LERRN) project which was launched last October. It’s a seven-year partnership between Canada, Jordan, Kenya, Lebanon and Tanzania, to effectively promote the protection and solutions with and for refugees through research, policy and practice.

“A refugee is someone who can no longer rely on the protection of their sovereign, of their state,” explains Milner. “And needs to go to another political community to seek that substitute protection.”

At the end of World War II, 55 million people were displaced in Europe so the sovereign states decided to cooperate to find a solution for refugees. This led to the creation of the global refugee regime.

The United Nations High Commissioner for Refugees (UNHCR) and the refugee regime were created to provide international protection and to ensure solutions for refugees. But the UNHCR acts under the authority of the general assembly.

“Governments remain the gatekeeper in ensuring solutions for refugees,” says Milner. “UNHCR has identified some 1.4 million refugees in the world today that are in need of resettlement to a third country to find a solution but it’s reliant on states offering places for UNHCR to then fill. And with recent changes in the United States, the number of places available for refugee resettlement this year will be somewhere in the area of 60 thousand. There is a massive gap between 1.4 million and 60 thousand.”

Milner ended his seminar with thought-provoking questions in regards to international cooperation and then gave the audience the opportunity to ask their own questions. One man wanted to know about Canada’s role in all of this.

“The main ways that Canada has contributed to the global refugee regime has been through money and resettlement,” says Milner. “Canada gives over 100 million dollars to UNHCR every year. With changes to the United States, Canada is now the largest refugee resettlement country in the world.”

But Milner argues that Canada has more value than that. He believes that Canada has the ability to engage in conversation and create spaces, instead of just focusing on providing more money or resettling more refugees.

Students can do their part as well under the LERRN project. The project has partnered up with Carleton University, University of Ottawa, McGill University and York University, and it has funds to hire students to participate in planning activities, doing research, writing literature reviews and hosting seminars.

Students can also apply for research placements with LERRN’s partners in one of the four countries under the National Working Groups. In the future, there will be events in Ottawa, Montreal and Toronto to generate student interest in regards to these issues and ask them to propose ways of reaching the objective of this project.