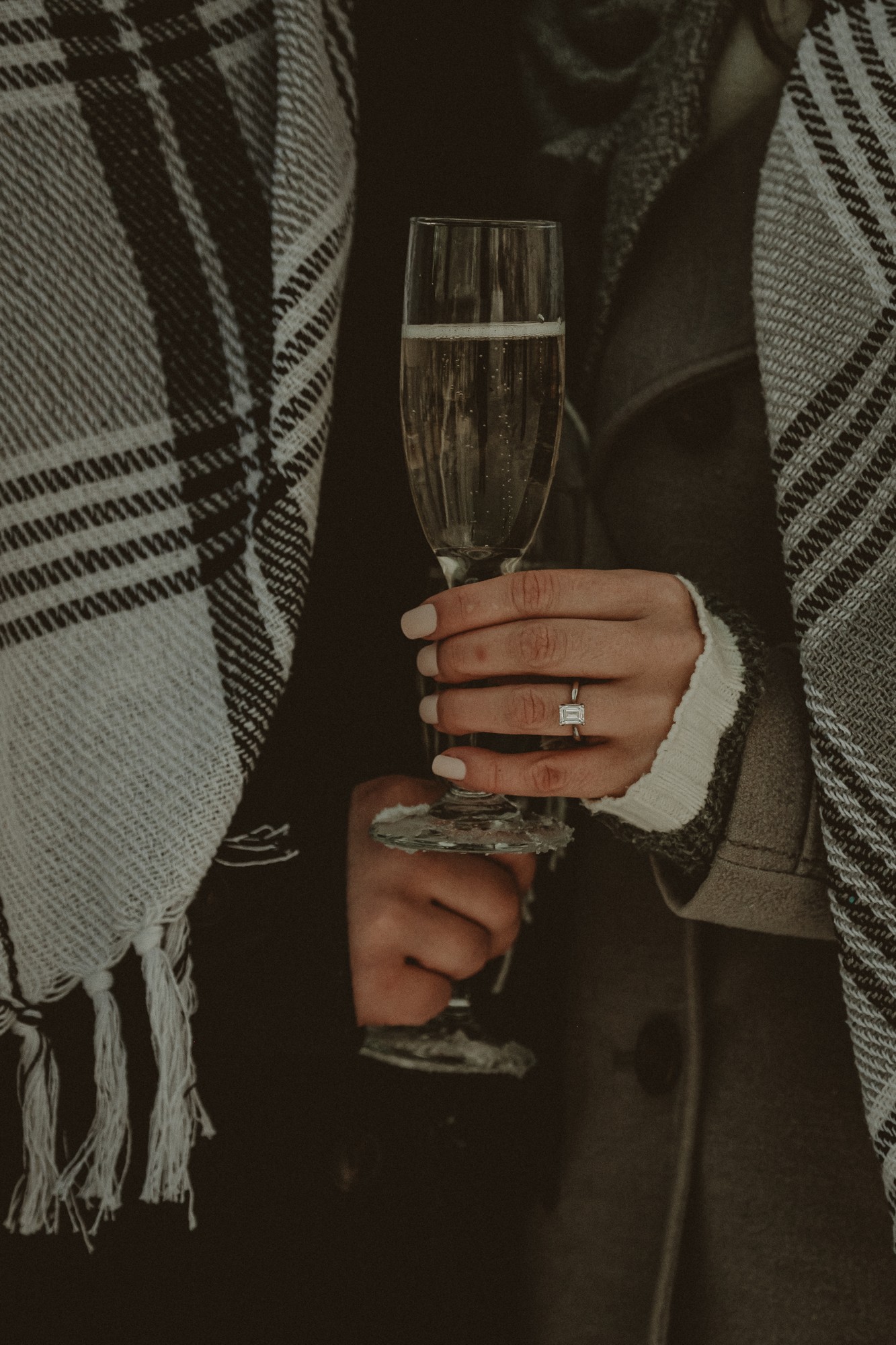 My red cheeks were numb from the cold, but it didn’t stop me from smiling ear-to-ear as I tied my new pair of ice skates, sitting on a bench in Sheffield Glen Park. On that freezing evening in January, I was excited about skating for the first time in 10 years – I had no idea I was about to get engaged.

Thankfully, despite the provincial government’s stay-at-home order, we were still allowed to go outside for exercise and physical activity. I had been looking forward to this moment since the first few days of winter. “This year, I’m going to start skating again,” I kept telling my boyfriend.

Skating around on an outdoor rink on the night of Jan. 20 felt like a glimpse of normalcy, although it took a good 30 minutes for muscle memory to kick in and my core to remember how to keep me stable on those thin blades. But being outdoors and enjoying an activity with my partner gave me hope that soon, we’d be going back to safe gatherings and fun times with those we cherish.

As I skated to the middle of the rink, lit up by white lights and a big, bright moon, my boyfriend got down on one knee and asked me to marry him. In that moment, I forgot all about the pandemic, and the ear-to-ear smile I had about picking up skating again turned into tears of joy as I promised the rest of my life to the best person I know.

Getting engaged during a pandemic does not take away from nor diminish the special moment. It does, however, leave many unanswered questions. “What year are you planning to get married?” “What season?” “Have you picked a venue?” “Do you want a big or small wedding?” “Indoors or outdoors?” “How many people?”

As the questions come pouring in from excited friends and family, we unfortunately have no answers to give them. How do you pick a date and start planning a wedding when you can’t even celebrate your engagement with your soon-to-be in-laws or a couple of close friends?

For Melissa Boutin, an Algonquin College alumna, that wasn’t an issue as her wedding was planned before the pandemic started and scheduled to happen on Sept. 19, 2020. Boutin and her soon-to-be husband, Andrew Pruysers, postponed their wedding to Aug. 14, 2021.

“It was pretty simple to reschedule with our venue, but they charged an extra 10 per cent if we postponed past April 2021, which we didn’t think was fair,” says Boutin. “If we would’ve canceled altogether, they would not have refunded any of our money.”

Ottawa’s COVID restrictions for Aug. 2021 are still unknown, making it hard for Boutin to plan accordingly. “We were lucky enough to be able to book all the same vendors again for the new date,” says Boutin. “But it’s still all up in the air with how the whole wedding will go. There will still most likely be restrictions and limits to guest list numbers, so it’s been very difficult to actually plan much.”

The venue asked Boutin and Pruysers to make two lists: people they absolutely need to have at the wedding and those they’d love to invite if numbers allow. As for catering, the couple does not get to choose the meals the same way they would have pre-pandemic. “Usually, we would go in and sample the meals, but we can’t now,” explains Boutin. “They were talking about possibly doing a take-out–style tasting, but I haven’t heard back yet.”

“This is causing added stress that’s already there with normal wedding planning,” explains the bride-to-be. “I want to get things done but it’s hard when we don’t know how the wedding will need to be.”

Since our engagement, my fiancé and I are focused on enjoying being newly engaged, as wedding planning is not something we feel is realistic right now while the province is in a second state of emergency.

Some couples went through with their wedding, but it looked far different than planned.

Giovanni Pisaturo married Emilia Mastrofrancesco on Oct. 10, 2020. The mortgage underwriter from Montreal proposed to his bride-to-be on July 28, 2018, during a fishing trip. The original wedding, scheduled for May 2020, was set to host nearly 250 guests. The wedding that took place a couple of months later had 20 people, including the bride and groom, in a Montreal church. The ceremony was followed by photos in Little Italy.

“It was just as magical and honestly, I wouldn’t change anything about how it all went down,” Pisaturo says. “Everything happens for a reason and this is just another one of those things. It couldn’t have happened any other way.”

Though the obvious disadvantage of this situation was not being able to share their wedding day with extended family and friends, Pisaturo and Mastrofrancesco focus on the positive.

“We definitely saved a lot of money,” Pisaturo says. “We were very lucky to not have put down any deposits that we could have lost. Everyone was very helpful and supportive, from vendors to family. And this actually helped me have much more fun on my wedding day. I can remember just about every detail of the day and didn’t feel like I was on the clock at any point.”

Like Pisaturo and Mastrofrancesco, couples all over the country have had to make difficult cuts to their guest list. Fancy seating charts for hundreds of people became a dozen important names on a yellow legal pad. Those in attendance rejoice in celebrating the newlyweds, but their smiles are hidden behind masks. Honeymoons are replaced with 14 days of fingers crossed hoping no one from the ceremony gets sick and the small gathering doesn’t make next week’s headlines.

“We were scared two people had infected our wedding party,” says Joseph Mathieu, an Algonquin College journalism professor, thinking back to two guests who discovered they may have come into contact with COVID-19 before attending his wedding to Karine Bertrand on Sept. 19, 2020.

Before Mathieu and Bertrand tied the knot, four attendees who were at higher risk were tested. About three days after the wedding, one guest working in a school was made aware of a positive case they had been in contact with and another guest’s daughter attended a daycare where the parent of another child tested positive.

Luckily, both guests tested negative. “It would have ruined the wedding,” explains Mathieu.

Bertrand and Mathieu’s original plan was to get married at a Rideau Lakes venue. “We were ready to host a three-day wedding that spread over a weekend,” says Mathieu. “The idea was for it to be like a summer camp: we would all have had little cabins, there would have been a lake with a dock and we would have gone kayaking and canoeing.”

But the location changed after the pandemic hit: an open field near Mathieu’s childhood home in the Merivale and Woodroffe area was cut and cleared for their big day. Mathieu got familiar with that field as a kid, walking the dogs and doing winter activities there. Little did he know, as a teenager exploring that field with friends – a couple of “up-to-no-good” kids, as he puts it – that he’d be marrying Bertrand in that same place, years later.

“We were 24 people at the ceremony and at the reception,” says Mathieu. The reception was held at The Whalesbone on Bank St. The couple had to cut more than 70 people from the guest list.

“It’s your day, your party, but you still care about your friends and cousins,” says Mathieu. “It was sad uninviting people but because of the pandemic, everyone was very understanding.”

Had it been the three-day summer bash they had originally envisioned, Mathieu and Bertrand would have been the hosts of the entire celebration. “With a smaller wedding, the focus was entirely on Karine and I,” Mathieu says.

The COVID-19 pandemic continues to have a major impact on the wedding industry. It forces brides-to-be to change their wedding plans, grooms-to-be to cut some of their friends off the guest list, couples to postpone their big day and hodophiles to wait until they can travel again.

But one thing all the pandemic proposals, down-sized weddings and postponed celebrations have taught us is that no matter the global crisis, nothing can stop love from happening.