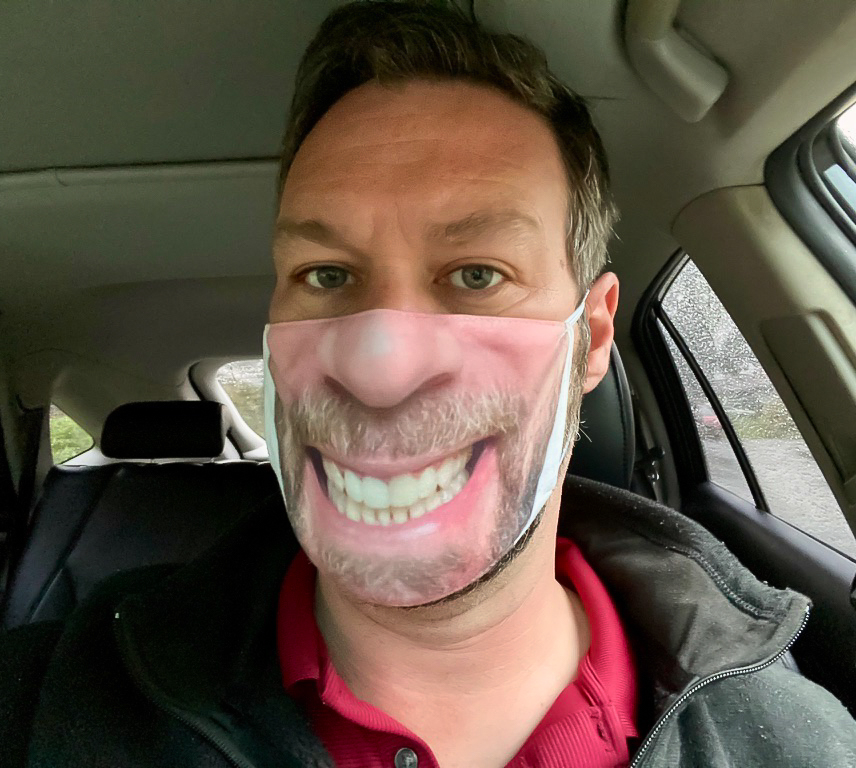 What can a standup comedian do when a global health crisis effectively shuts down the performing industry for months and upends people’s lives across the world?

If you’re Canadian comedy legend Jon Dore, you sit down and find humour in the absurdities of this new normal.

CBC’s Humour Resources is a comedic look at the strange ways lockdown measures have impacted our collective work-life balance and the standup comedy industry at large. It’s one of the first shows in Canada that was pitched, produced, and promoted entirely within the pandemic.

“This type of television show feels relevant,” says Dore, his friendly voice sounding clear and crisp over the Zoom call. “I feel very lucky to be doing the show we’re doing now.”

Known for his often zany, boundary-pushing comedy and The Jon Dore Television Show, Ottawa’s own Dore stars in the six-episode series as the new Human Resources Manager for the literal “business” of comedy, hosting virtual meetings with his real-life comedian friends and conducting a performance review of their time with the “company.”

The guests include comedy heavyweights like Sarah Silverman, Nikki Glaser and Jon’s friend and fellow Algonquin College alumnus Tom Green, as well as a handful of comedians who kickstarted their careers in Ottawa, including Sophie Buddle, Casey Corbin and Kyle Brownrigg.

“Treating a creative world with a corporate filter on is really fun to do,” says Dore. “I’ve learned that being my authentic self isn’t easy so it’s fun to lean into a bit of a character.”

That may be so, but Dore manages to weave some surprisingly honest and relatable moments of pandemic life into the fabric of the show – albeit with his trademark wacky comedic edge. 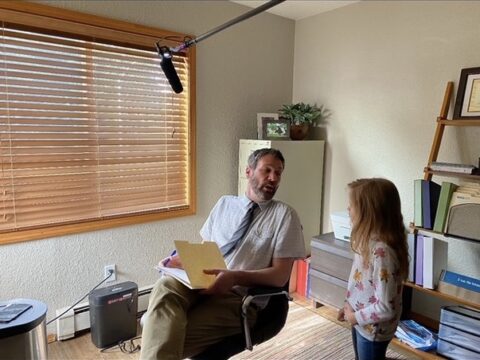 Dore's family is incorporated into the show, which includes humorous takes on homeschooling and work-life balance. Photo credit: Photo supplied by Jon Dore

Wrapped around the interviews he does with comedians are charming segments of Dore’s life in lockdown in Juneau, Alaska. The beautiful state is currently home to Dore, his girlfriend Christina and her seven-year-old daughter Emma. The difficulty of balancing work and homeschooling features prominently in the show, and Emma, in particular, supplies sweetly funny moments as Dore’s primary distraction throughout his workday.

Dore admits he was well-equipped for this unique filming challenge, thanks to his time studying in Algonquin College’s TV broadcasting program.

“I love being hands-on with equipment, writing my own ideas, shooting them and then editing them,” he says. “The combination of Algonquin and [my time at] Rogers Television was the best learning experience I’ve ever had,” he says.

Arthur Simeon is a Toronto-based comedian and one of the show’s writers. He agrees with Dore that the show feels remarkably of-the-moment. “I think it’s very innovative,” he says. “It’s also very funny and very heartfelt and I think a lot of people can relate to the idea of trying to figure out things at home [during this time].”

“Jon, who’s one of the funniest people on the planet, is bringing human resources – a very rigid sort of process – into the world of comedy which is known for all its volatility,” says Simeon. “Comedians have to evolve with the times.”

“The show existed for about a year-and-a-half,” explains Dore. “We originally pitched it to Quibi. It was going to be five- or six-minute interview segments, that’s it.” The extraordinary circumstances of the pandemic, however, meant networks needed new content that could be produced quickly and remotely, so Dore and his team restructured the format and zoomed-in – pun intended – on the nuances of life in the pandemic.

“[CBC] liked it right away, so we dove right into making six episodes – no pilot, no script,” he says, admitting even he was surprised at the network’s quick decision. “I think it was a matter of a month, not even.” 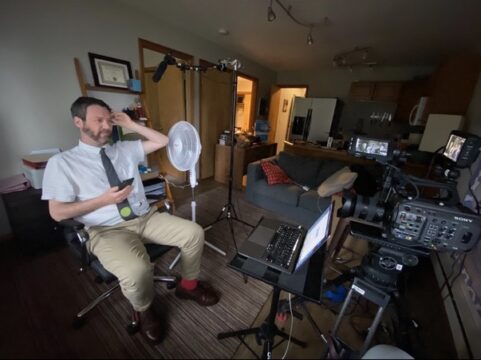 Dore takes direction from co-creators Adam Brodie and Dave Derewlany, who communicate with him remotely through a phone he keeps in his pocket. Photo credit: Photo supplied by Jon Dore

Despite the relatively simple concept of the show, the process of writing the script and filming it remotely – with a team spread out over multiple time zones – presented some unique challenges for its creators.

“It’s just myself and a camera operator who’s in PPE gear and one production assistant running around getting things we need, but that’s it,” explains Dore of his own location set-up in Juneau. “Normally it’d be like a 25-person crew minimum. We had three of us.”

“It has to look good and be broadcast quality,” he adds. “We’re shipping cameras to Los Angeles and to St. Louis and to New York to interview people, so the process is just crazy.”

Issues with technology and remote set-ups persisted throughout filming, Dore shares. Camera gear was held up in customs, Wi-Fi signals were unreliable and crew members “would have to troubleshoot on the fly,” he says. The comedian also had to adapt to some awkward filming techniques. For his scenes, directors and co-creators Adam Brodie and Dave Derewlany communicated with Dore through a cell phone he kept in his pocket. “It [was] a technological nightmare,” he says. 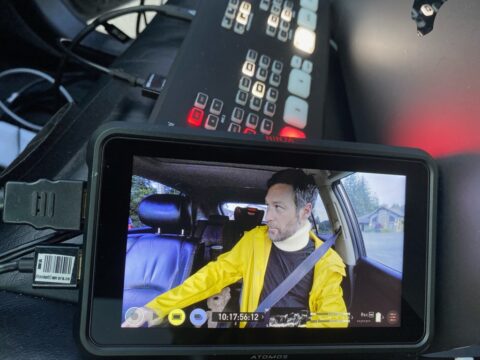 This is why Dore encourages students who are eager to enter the field to learn everything they can about the industry. “You have to learn about depth of field, you have to learn about editing…you should be familiar with every position to understand how a set works and how you’re going to tell a story and what goes into making it look good. Storytelling is so important.”

Yet, thinking back to the first lockdown nearly a year ago, Simeon admits that storytelling isn’t always easy.

“You feel like the rug has been pulled from under you,” he says of the sudden shutdown of the standup comedy scene. “A global pandemic is one of those things that teaches you so much about the human condition. And as a comedian, you are sort of wired to find the nuances and the jokes that come with that, but then you can’t actually present it to anyone. That was very difficult.”

Being creative was a struggle for the show’s star as well. “It’s interesting, you have all this time, and almost a blank canvas. You could wake up and record your own video, you could write a book, you could write a screenplay, but you don’t have a fire lit under your ass or a purpose,” says Dore. “It was hard to find a reason to get up and write when the future is so uncertain.” 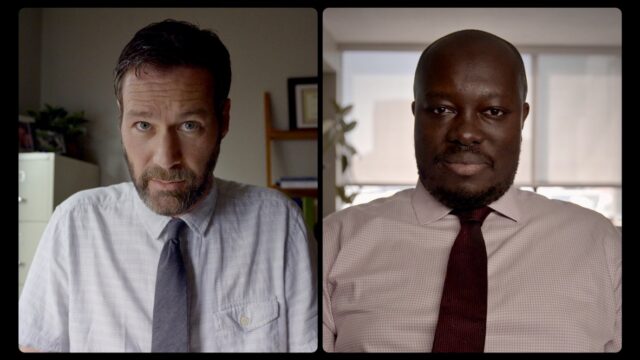 So while the show dealt with its fair share of technological and logistical problems, it proved to be an emotional fix for its creators.

“It was so fun to dive in and create a character, because there was a purpose for doing all that work,” says Dore.

“I’m really excited about Humour Resources,” adds Simeon, who also got the chance to appear as a guest on the show. “I’ll never tell him this, but I think he is one of the funniest people I’ve ever met,” Simeon says of Dore. “My whole aim was to get him to break [on camera], but he got me to break first – that was a victory on his part.”

Dore admits he’d prefer to be filming shows in-person. “I just love everyone on set feeling like a family and a community and taking lunch together and talking and being supportive and making jokes and laughing or crying. That feeling to me is so valuable and important and that’s the best part of making television.”

He acknowledges though that the future of television is likely to blend the “normal” way of filmmaking with the innovations the pandemic has brought about.

“It’ll probably be a hybrid of the two. I think we’ve kind of proven to ourselves that it can be done.”

Watch Humour Resources Tuesdays at 9:30 p.m. on CBC and online at CBC Gem.