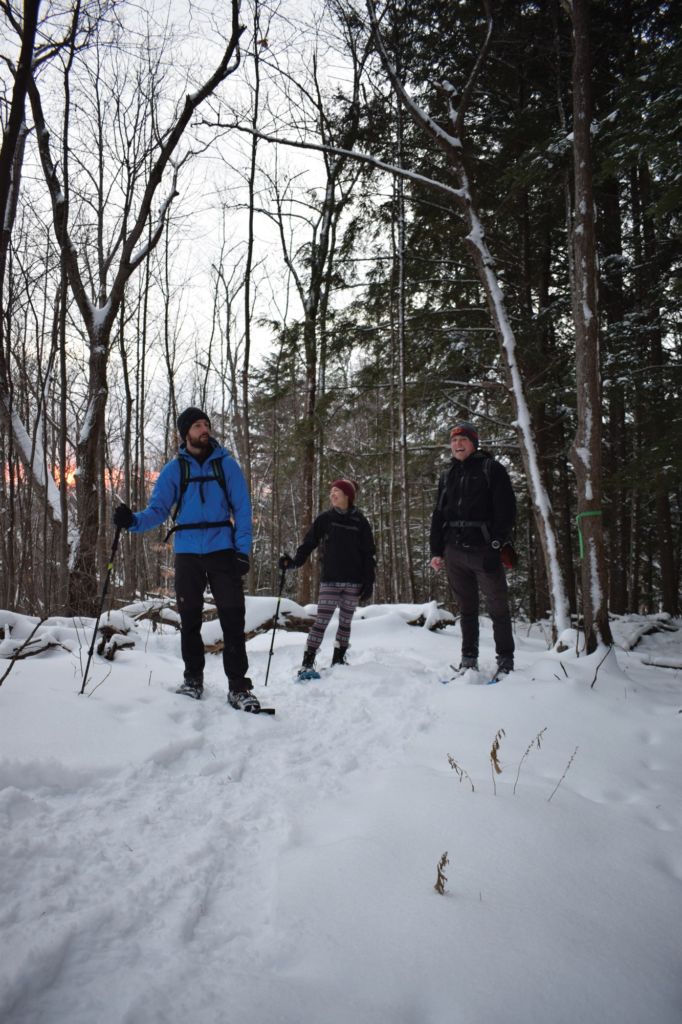 Sam Weichel, a first-year student in Algonquin’s environmental management and assessment program, lives for chances to escape into the outdoors with his camera in tow. “There’s less going on, you don’t have your cellphone going off, you’re not driving in traffic, “ he says. “You don’t have to worry about getting groceries or doing laundry or dishes. You know, the life things you have to do. It all kinda just melts away.”

Despite a growing body of evidence cautioning against our incessant use of technology and increasing disconnect from the natural world, our lifestyles remain the same. Andrea Prazmowski, a certified forest therapy guide, is seeing it too. “When I see people walking down the street with their heads down focusing on the screen in front of them and not noticing where they are — not noticing the birds flying by or the changing leaves — that concerns me,” she says.

Like Weichel, Prazmowki is a big fan of the great outdoors. “I find that going out among the trees is an engagement with the reality around us,” she says, “and not the virtual reality.”

But for many, unplugging is unnatural, illogical and seemingly impossible. However, cutting the cord doesn’t mean you have to delete social media and live in a van down by the Rideau River. There are ways you can power down and experience Mother Nature’s medicine by setting aside a few minutes each day.

Keep the blue light out of the bedroom and treat yourself to freedom for the first hour of every day. Make your coffee and drink it on the porch. Walk down the street for a juicy Egg McMuffin or roll out your yoga mat and do a couple sun salutations in the living room; whatever your pleasure, but try to keep the screens out of it.

Christina Crook, author of The Joy of Missing Out, calls this time the holy hours and urges people to rethink how they spend them as they set the intention for the rest of the day.

“Hours could pass and I’d still be chasing rabbit holes on Facebook,” says Prazmowski, who was introduced to technology later in life and noticed the effect it was having on her life.

Technology was created as a tool, a way for us to communicate with one another; to share and access information, but it has become a lifestyle; a bad habit we just can’t kick. We need to remember the reasons why we use our devices in order to set boundaries and limit the unwanted effects on our lives.

Laurel Ralston has done just that. Ralston plays in multiple bands, works a part-time job and is completing her PhD at Carleton University. Her time is valuable and she says that without her phone or Wi-Fi, she “can see something though from beginning to end without distractions.”

Ralston has a few tips and tricks.

For one, buy a watch to check the time without seeing your pending notifications. Silence the notifications – take back control and check your phone on your own time, not when it tells you to. Use your cellphone like a landline – leave it charging in another room so you don’t get distracted, but turn the ringer on so you don’t miss important calls.

Weichel also adjusts his notification settings so he can fully enjoy his time outdoors. “Sometimes I just put mine on airplane mode so I can still take pictures with it,” he says.

“Technology can pull us away from doing the things that we know are actually better for us,” says Prazmowski. “Even though we know going outdoors feels good, we underestimate how great we will feel. The first step is just going out and trying it.”

We live in a city where that’s easy to do. “You’re never very far from green space in Ottawa,” says Ralston. “We’re super lucky here.” With bike paths, parks, waterways framed by pathways and quick access to beautiful Gatineau Park, there is nothing stopping you – except maybe rush-hour traffic –from getting out there.

Prazmowski suggests starting by picking a different route to school or across campus. It might be a longer walk through a park or just a detour through the trees, along a stream or just somewhere you can hear the birds. By doing so a few times a week we can begin to form a new habit. “Its a reward system because it feels good so then you seek it out more,” says Prazmowski.

Weichel suggests hopping on your bike, or renting one, and riding 20 km through Gatineau Park to Chelsea, QC. Quench your thirst with a brew at the Chelsea pub or buy a treat at Une Boulangerie dans un Village; energy for the ride home.

If you don’t have a car or the enthusiasm to make the trek by bike, Gatineau Park can seem out of reach. Although not easy to find, there is a way via STO, Gatineau’s transit system. Ralston suggests STO routes 31, 33, or 37, which pass through downtown Ottawa before arriving less than an hour later at Trail 26 just beyond Cégep de l’Outaouais, Campus Gabrielle-Roy.

When was the last time you fell asleep looking up at something other than your phone, TV, or that water stain on the ceiling of your rented room?

Going camping on your own can be daunting and expensive, but with a little bit of gear, a few skills or an outdoor savvy friend, you can escape with ease.

“One of the big things is lack of access to gear or a car,” says Natalie York, vice president internal at CUSA and an executive on the Carleton Outdoors Club. One of the larger clubs at Carleton, the outdoors club organizes events and trips to help students get outdoors and learn outdoor skills, prioritizing fun and creating community. York says that experience is not necessary and most gear is provided to participants who attend club events like camping or kayaking trips. She clarified that even though the events are directed at Carleton students, they are not closed to students from other schools.

For those looking to camp on their own but are missing some gear, Mountain Equipment Co-op offers affordable rentals of tents, packs, sleeping bags and sleeping pads. Even canoes and kayaks or skis and snowshoes can be rented so you can get out there no matter the weather.