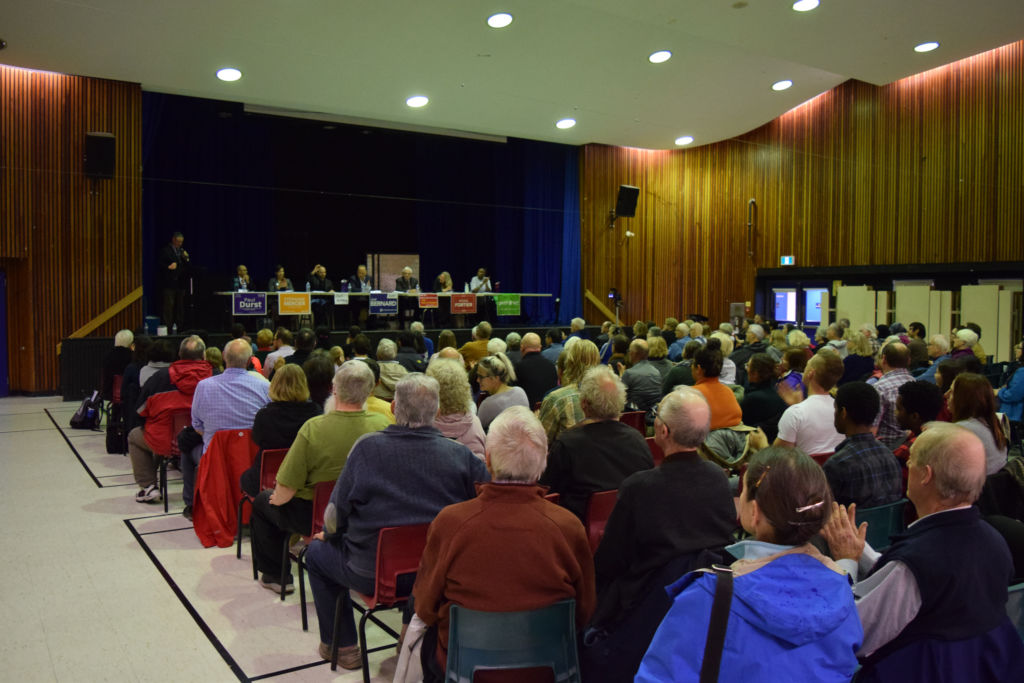 Oct. 16, a rainy Wednesday night, brought with it one last chance for seven Ottawa-Vanier candidates to debate politics in front of prospective voters for the upcoming federal election.

Candidates spent much of the night attacking what seemed to them to be a lack of prosperity in a riding that has been a Liberal party seat since 1936.

“With that faithfulness to the Liberal party, Ottawa-Vanier should be the most prosperous riding, bar none, across Canada,” said Conservative party candidate Joel Bernard.

The debate, took place at Colonel By Secondary in Gloucester, saw a diverse range of questions that were submitted by riding constituents online. Multiple legislative strategies were brought to the debate from the candidates as they discussed climate change action, electoral reform, the phoenix pay system, assisted dying, poverty and mental health care.

Altman started the opening statements and drew applause right away. “You shouldn’t necessarily trust any of us up here either,” he said. “We know what trust fundamentally is, and you don’t know us.”

One of the topics that drew forth the greatest differences among candidates was regarding the possibility for electoral reform in a country where an elected-governing party can be in power with support from 30 per cent of the population.

Mercier, Altman, and Ngabirano all voiced their opposition to what they say is a lack of sincerity coming from 2015 Liberal party platform promises that came under Justin Trudeau.

“When he got in power, he didn’t deliver,” Mercier said “I was really, really frustrated with that because first-part-the-post actually pushes people to vote strategically and not for their values. They’re voting against something and not for something.”

When it came to sparring over climate change, candidates were either on the side of a need to reorient Canada’s economy or on the side of needing innovation and punitive measures for carbon emitters.

Fortier also referenced the Liberal strategy to increase retrofitting of homes across the country, an idea that has been adopted at some level by the Conservatives, NDP, and Greens.

“Did you know that the carbon tax, large emitters are mostly exempted from it,” Bernard said. “So you and I get to pay the carbon tax, but the ones with the real pollution- they get an exemption.”

While Bernard suggested that the solution lies in taxing the largest carbon emitters and exporting innovative technologies that benefit the environment, Ngabirano pointed out that the underlying issue of poverty applies to climate action as well.

“If someone doesn’t have food on the table, they really don’t care about plastic or paper or if their straw is plastic or metal. If we wanna protect the environment, which includes people, we need also to protect the people,” she said. “The people in Ottawa-Vanier need a guaranteed livable income to make sure that they have food on the table and roof on their heads.”

Meanwhile, Altman used his independent platform to push a policy idea that is rarely heard in the mainstream environmental dialogue.

“You’re probably gonna clap less for this, I am a proponent of nuclear research and nuclear power generation.”

The statement was followed by a round of applause, to which Altman acknowledged his surprise.

Among the various topics, it was a question from a constituent regarding the Phoenix pay system that brought forth a heated exchange between Fortier and Bernard.

“Unfortunately, we inherited a poorly-introduced system with 700 compensation advisers that were cut off at the beginning,” she said, referring to the 2015 transition from Stephen Harper’s Conservative government.

“In 2015, Liberals were told that Phoenix is not ready,” Bernard responded. “They decided to go ahead with it, probably because it was a cost-saving measure.”

Every candidate was in favour of a policy that would send interest to federal public servants who are owed back pay as a result of the pay system’s failure, except for Fortier.

Fortier did not directly answer the constituent’s question regarding interest payments.