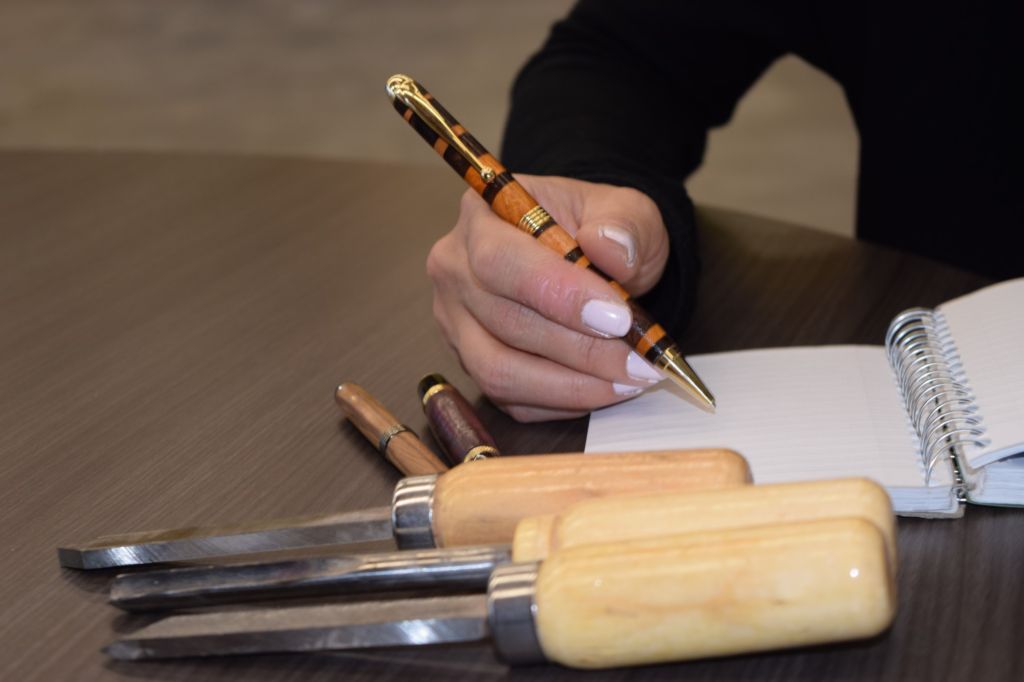 The room was filled with dust and the aroma of wood lingered in the house.

After assembling the two pieces of the wooden blanks, Rania Shaher rubs them with sandpaper. She applies friction polish to make the surfaces attractive and to give them a final finish. Then she clips on the end portion with a cap, adjusting the nib so it doesn’t stick out or inwards while rotating the rear part of the pen for writing.

Shaher, 28, says that she first thought of making handmade pens when her boyfriend asked her for a Mont Blanc pen.

She started making pens in late August of 2018 and eventually started selling them.

“I had seen a picture of a wood turned pen and thought it was really unique,” Shaher says. “When my boyfriend wanted a Mont Blanc pen, I remembered the picture of the wooden pen and decided that I would learn how to make one, so I could give it to him for his birthday.”

After doing a bachelors in law from Carleton University, she went to Beijing, China to work in business. After returning to Canada, she worked at a CIBC bank. She continued her career in business, but never found the time to work on her hidden hobby. This past summer, the idea of pen-making popped into her mind again and she decided to start working on it.

“It started as a hobby,” says Shaher. “I thought I could monetize on it, so I sold them.”

She made and kept them in consignments stores. One of the consignments was in Ann Chapman’s gift store in Kemptville.

“She showed me her pens and asked if I want a consignment,” Chapman says. “I didn’t know if they will do well.”

After Chapman noticed that they were successfully selling as gifts, she bought some from Shaher. Chapman is also a real-estate broker in prestige property. When she closes a deal, she gives her clients a gift.

“I haven’t seen such a thing before; it’s new for me like it was for people,” says Chapman. “Those worked very well; they were unique, so people liked them.”

At first, she purchased ready-made pens from Shaher. After, she ordered more pens with the designs she liked.

Shaher has received around 25 clients from around Canada and mostly receives orders from friends and their friends.

“I made pens in bulks to sell them, but I also make pens on order,” says Shaher. “My clients would buy a few and if someone needed such pens, my friend would direct them to me.”

Currently, she is studying preparation for health science with the academic access centre at Algonquin College, so she finds it hard to prepare her orders on time.

“Carving wood to make pens keeps my schedule busy, but because it’s something that I enjoy doing, it’s a way for me to clear my mind and de-stress,” says Shaher. “It also helps me learn time management, as it requires much time.”

“I’m always thinking of new designs to expand my product that keeps me awake at nights.”

She plans to construct her site and sell her pens online through Canada Post. On social media, she just started an Instagram account called, @woodhauscreations, where she displays her work.

“If I am able to expand on it and increase my income, I would use it,” she says. “Right now it does provide me second source of income.”