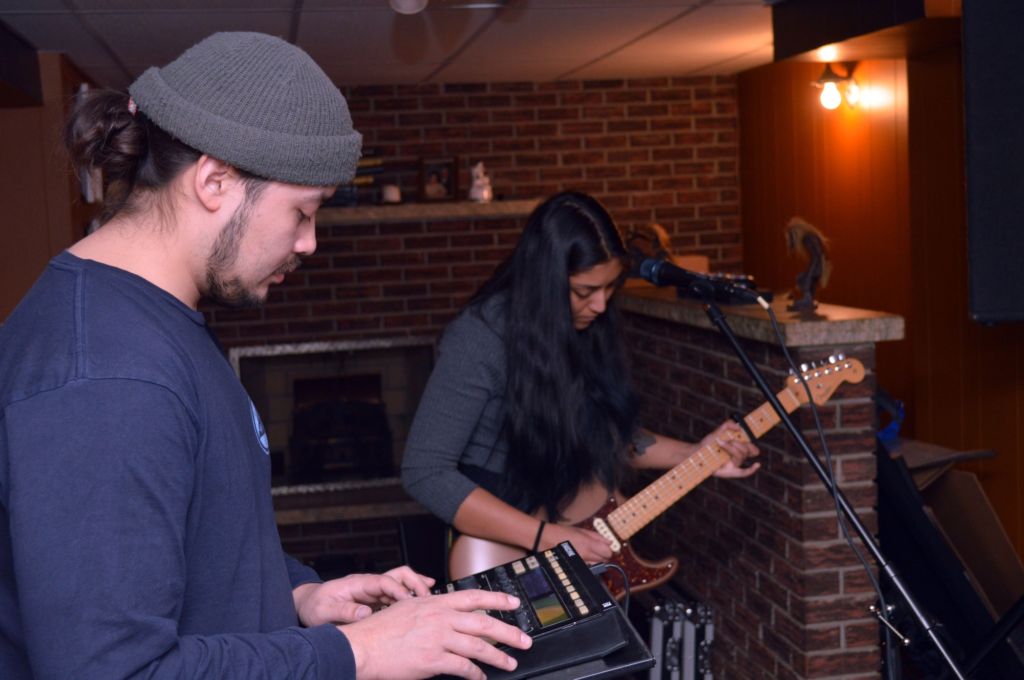 As the lights dim at Black Squirrel Books and Espresso Bar, the sound of deep bass and slow drums start to fade in. Slowly, the sound grows louder and the beat picks up. A string of LED lights illuminate a microphone stand, along with a lone light bulb behind the stage setup that helps create a tranquil serenity in the café.

People start to gather around the makeshift stage area; some leaning on the surrounding bookshelves, some sitting on the floor with their shoes off. Everyone’s attention is on the two-person band surrounded by gadgets.

The music picks up and a soft voice starts singing.

That voice belongs to 24-year-old Amanda Lowe Warnakulasuriya, one half of post-rock duo Novusolis. Lowe Warnakulasuriya and her partner Zach Perron, 26, formed the experimental band three years ago after meeting on Tinder. They had an instant connection through their love of music.

The band is breaking down traditional musical barriers. They don’t have an actual drummer and they rely heavily on looping (and multitasking) in order to bring their songs to the stage. Perron plays guitar and creates the drum loops while Lowe Warnakulasuriya takes care of vocals and synthesizers, which eliminates the need for a bass player.

“I have a studio at home with a bunch of gadgets and I do all the producing at home,” says Perron. “I’ll make a beat live in the studio; we’ll play it, record it, sample it and then I put that in my loop pedal. So that’s the first layer of the loop and then I play on top of it. It gets around having somebody else triggering drum samples.” 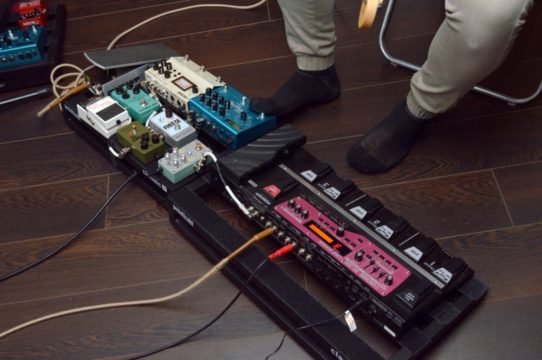 Not only do they use loops and synths to complete their sound, but Perron prefers to use unusual time signatures to give them an added unpredictability.

The band’s latest release, Collapse, came out in June 2018 and is a follow-up to their debut album, Fevered Dreams. Lowe Warnakulasuriya says that being able to match their studio sound in live performances was, and continues to be one of their top priorities.

Matt Francis of Head For West Records, the label under which the band operates, believes their unique sound and honest lyrics have an instant appeal. That made him interested in having them on board and they became one of his favorites to work with.

“It’s something that will stick with you,” says Francis of Collapse. “The more you read their lyrics and all that stuff, she’s talking about real shit. They’re worthwhile people trying to look after and to push as many directions as possible.” 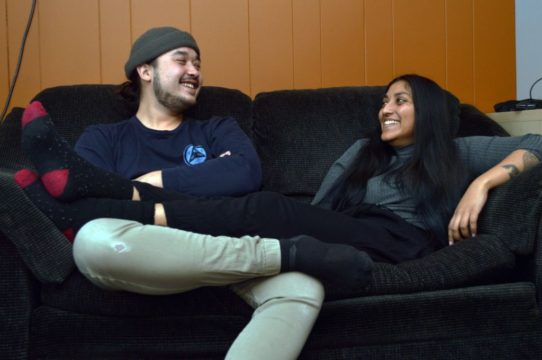 Post-rock duo Novusolis released their second album, Collapse, in June 2018 and are working on a follow-up. After a small, yet successful European tour in the summer of 2018, the band is working towards heading back overseas in 2019 to continue sharing their music with the world. Photo credit: Kavan Young

“They’re the coolest, most laid-back, interesting people,” he continues. “I think Adam and I like working with them so much because they’re so open to new ideas.”

Lowe Warnakulasuriya says that her lyrics reflect personal experiences as opposed to an outsider looking in. She tries to write songs that people can relate to and that evoke emotion.

“There’s always something about us that comes out of the lyrics,” she says. “It’s really important because I don’t like writing about shit that doesn’t happen to us. I always feel like music has always helped me heal.”

She elaborates by saying that she has written songs about her father being abusive towards her mother, a family friend’s struggle with Alzheimer’s and recovering from major mistakes in life.

They are tough issues to talk about but they are issues that many people deal with. Lowe Warnakulasuriya believes that talking about them through music helps people make a lasting connection with the band. 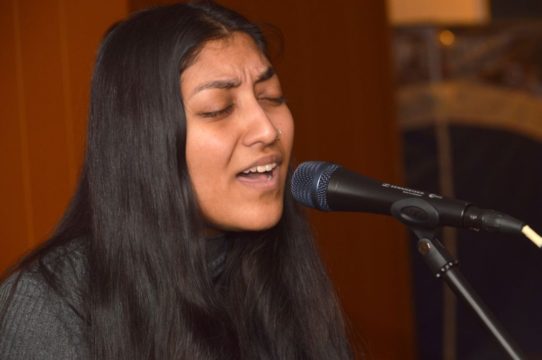 Amanda Lowe Warnakulasuriya of Novusolis practices in the band’s home studio. After a small, yet successful European tour in the summer of 2018, the band is working hard to head back overseas in 2019 for bigger and better opportunities. Photo credit: Kavan Young

Making that kind of connection not only makes their live shows special but has given them the opportunity to share their music internationally. Last summer, the band played a handful of successful shows in Europe and has plans to head back overseas in the summer of 2019.

“We’re trying to do Switzerland, France, Germany and the Netherlands if possible but it really depends on who books us,” she says. “We’ve applied for all these festivals.”

This upcoming summer will be busy for Novusolis as they expect to release new music before heading overseas. They aren’t sure if they want to re-release Collapse with bonus tracks or jump straight into another full-length album.

The initial release was strictly digital after Perron noticed that physical copies from his last couple bands didn’t move very well and are still sitting in a box in his basement. This time, they want to bring physical copies to the live shows but want to make sure the album doesn’t get stale.

No matter what they decide, they’ll have no shortage of material. Perron sometimes practices on his own for up to seven hours at a time and writes new music every day.

“We want to release an album a year, but we need to slow that role,” says Lowe Warnakulasuriya, “I think this album is going to keep traction a little bit longer.”

Regardless, the band’s goal isn’t fame or fortune; they simply want to continue making music they love and share it with the entire world.

“We don’t care about like, Beyoncé fame,” says Lowe Warnakulasuriya. “We’re not going to beat ourselves up for not making it because that’s not our goal, to be another Radiohead. It would be nice to be on a sustainable level of touring and then getting opportunities to play different countries, different cities and obviously not breaking the bank doing it.”