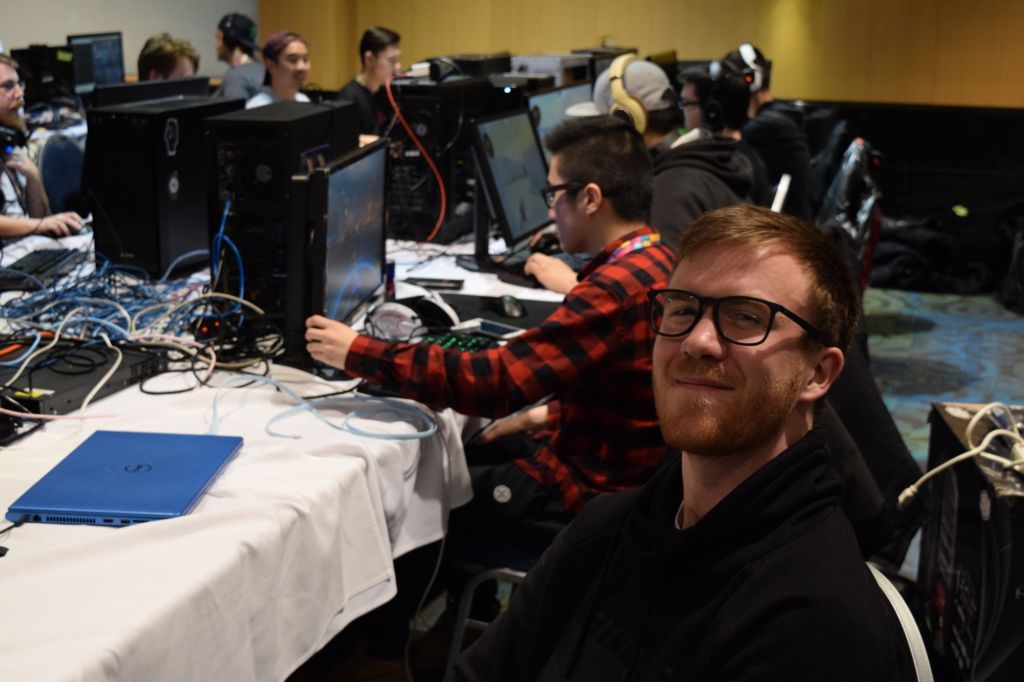 This is the first time the tournament has been held off campus. Last year the club held the tournament in one of Carleton’s residence buildings, but because of the high turn-out and a venue unsuited to the needs of the event, they ended up having technical issues. Carleton computer science student and co-president of Carleton’s Tespa branch, Martin So, says they were looking to move the event off campus after last year. Tespa is an organization run by Blizzard Entertainment which helps supports collegiate level esports in North America.

“We had been looking for venues since October,” says So. “After last year we realized having events on campus is probably much harder. We are very limited in terms of infrastructure at Carleton, we don’t actually have the capacity. Last year at Frostfire we actually blew one of the power circuits in the room because we had too many computers connected.”

So believes the turnout they have had at Frostfire and in their own clubs growing numbers reflects a growing interest in esports in Ottawa.

“Last year we had 250 attendees total,” says So. “We surpassed last years attendees at this time already; currently, we are at 270-280. I’ve been part of Tespa Carleton since 2016, at that point we had eight people in the Discord and now we have 1500. That change in the span of two years is nuts.”

This year the event was held in Gatineau at the Palais des Congress de Gatineau and the event spanned from Saturday at 11 a.m. until 6 p.m. Sunday.

Frostfire isn’t a tournament that focuses on one game. As mentioned above the event is comprised of many different tournaments for different games. So says this helps draw more people to the event by having something for a variety of different players.

“It’s not restrictive. It’s not like we’re saying ‘we’re only running Melee and Ultimate [versions of Super Smash Bros.]’,” says So. “It covers a wide variety of different players because it is off campus you have UOttawa, Carleton and Algonquin students coming to. Even people from other regions. We have people from Montreal and one person from Texas.”

Carleton Tespa plans on running the event for years to come. So says this year was kind of an experiment; they wanted to see how the event would run off campus versus the on-campus experience they had last year.

“This is sort of like our guinea pig event,” says So. “Hopefully we can gauge how it performed on campus last and off campus this year. With the turnout and the amount of sponsors we’ve been able to get, most likely off campus is the best option for us.”

University of Ottawa graduate Erik Heykoop was one of many people from around Ottawa who came to compete in the tournament. Heykoop competed in the Guilty Gear tournament where he finished fourth overall.

“I’m a fan of esports events in general, most events feel very underground and backroom so having events like this are nice,” says Heykoop. “The only issue to me was that the venue fee was pretty steep and usually if you’re paying like 25-, 35- or 45-dollar venue fee it’s reasonable to expect that they would have consoles there for people to use already.”

Heykoop says he feels events like Frostfire are a symbol of growth for Ottawa becoming a larger player in the overall esports scene.

“Obviously Ottawa has a lot of talented Guilty Gear players and Street Fighter Players,” says Heykoop. “I don’t really know about Rocket League or Counter-Strike: Global Offensive. But it feels like this is what the Ottawa esports scene is moving towards. And as events like this get bigger and bigger it would be nice to get more competition to come to these events.”

The consensus among the attendees was that the event was well run. Heykoop believes if it stays that way it will continue to attract more talent from out of town.

“I’m sure next year if this event continues to be as well run as it is some of the big players from the Greater Toronto Area will make a trip down,” says Heykoop.

The event attracted competitors young and old. William Guvin is a student at St Mark’s High School. Guvin was there to compete in the Super Smash Bros. Ultimate tournament.

“I won two games and lost two games, I think I did pretty well,” says Guvin. “I’m here because I want to prove my skill and get involved with the community.”

Guvin was surprised with the turnout the Frostfire event had.

“It’s interesting, it’s a big community and a big venue, it’s pretty cool. In the future, I hope I can do other tournaments and get more involved.”

For more information on Ottawa’s esports community check out Glue’s article on the different hangouts specializing in esports.

For more information on Tespa check out this article.